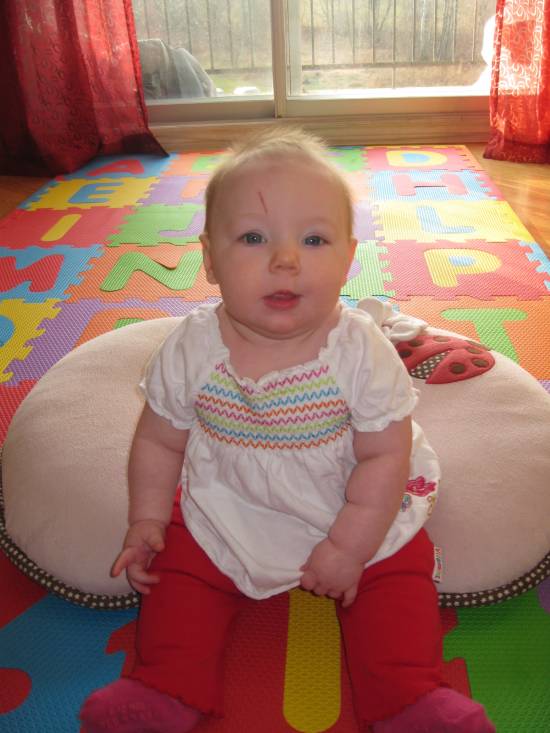 This post is written by contributing writer, Tasha from Spann-ing the Globe.

When I stepped into the church nursery on Sunday, I expected to see my happy baby playing with the other children. Instead, I saw her being held by a worker while she sobbed. As I stepped closer, I saw why she was crying and my heart broke. I waited quietly as the translator patiently relayed the story from French to English so I would not be confused. I demurely smiled as my heart broke even more.

My sweet baby loves to play with other children, but today was not a fun day for her. Another child, in a tantrum, sought her out and hit her on the head with a heavy block. I simply stared at the growing goose egg on her forehead. The translator continued and explained that when the worker went to get an ice pack, another child accidentally scratched her forehead. I wanted to cry with her as I watched them blot the blood with a napkin.

Even though this was not the first time my child has cried before, I was still stunned into silence with my mind reeling with questions. I refused to show my anguish as I quietly nursed her in a corner of the church nursery. I read over the incident report (in French) and asked a few questions, but I refused to let my emotions show. I had so many questions:

Not only did my lack of knowledge of the French language betray me, but my heart was too broken to ask any questions verbally.

I did not want my daughter to see me upset, and I did not want to act emotionally over a silly incident. My daughter has bumped her head before. She has certainly had her fair share of tumbling times while she learned to sit up on her own. She most definitely has gotten scratches from household objects (not quite this bad) in her many unsuccessful attempts to army crawl all over the place. But as a mom, I wanted to go into protective mode and shelter her forever into a bubble to prevent harm from coming her way. The little fantasy world in my head was growing with ideas on how to I could try to shield her from every possible danger in life!

That night when I prayed, I asked God to explain to me why my baby had to “suffer.”  She is so innocent and her only crime was her adoration for other children. Like every mother, my instincts made me want to take the mean little boy and personally put him over my knee, but I know that was my anger speaking.

I wanted to greedily ask God to never let my child suffer again, but before I could ask, God answered me.

There will be no suffering.

Revelations 21:3-4 “And I heard a loud voice from the throne saying, ‘Look! God’s dwelling place is now among the people, and he will dwell with them. They will be his people, and God himself will be with them and be their God. He will wipe every tear from their eyes. There will be no more death or mourning or crying or pain, for the old order of things has passed away.’”

What was I thinking? I felt so foolish that I was thinking in terms of earthly suffering! Suffering is so common to the human condition. Oh how God has blessed us by allowing us to be a part of the solution, even though it was us who caused the problem, and separated ourselves with sin! Part of the solution is to share Jesus with a world so desperately seeking to restore a relationship with their Creator.

I immediately felt humbled and at the same time grateful for Christ’s sacrifice; so one day “in a moment, in a twinkling of an eye” we will suffer no more. Yes, the world has many evils that my daughter will witness, but how precious is The Lamb that was slain so that we may have an eternity to live with God!

Has the truth, as revealed in God’s Word, ever become more apparent to you as you’ve walked the path of motherhood?