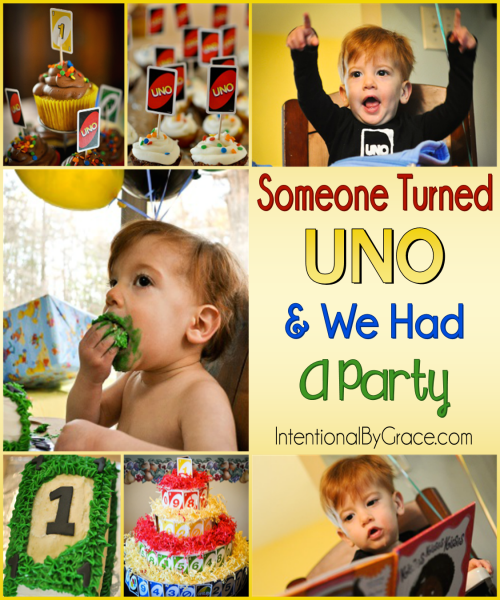 Everyone says it, and generally, I don’t like to say what everyone else says (I’m a rebel like that), but man, I can’t believe my baby just turned one! It truly feels like just yesterday that we were announcing his arrival into this world. Now, here I sit, reminiscing this last year and praising God for the gift Samuel is to us.

To celebrate his birthday, I wanted to have a kicking awesome theme. I surfed Pinterest for months leading up to his birthday, and I finally found the theme I’d been looking for.  We had an UNO party based on the classic card game!

My mother-in-love designed an invitation for me, and we had them printed into 4×6 photos. Trying to get this little busy-body to sit still with the UNO cards was quite the task. Ended in both of us crying. Poor things. Oh the memories! I think they turned out cute as a button though, don’t you? 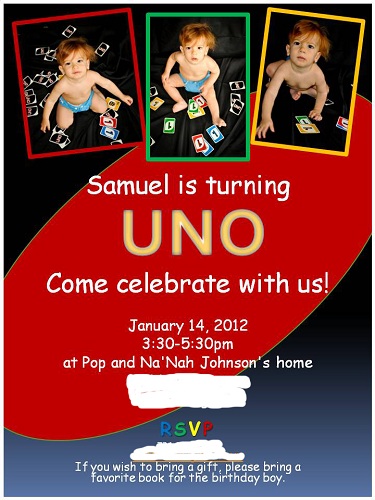 We also opted for NO TOYS! We simply did not want a bunch of toys for a little one year old. We already have far too many. Therefore, we requested that guests bring a book to share with Samuel. It was wonderful. We now have an incredible collection of books, and we didn’t get a single duplicate! Samuel adores books. He is always bringing me a book to read, and most days, we read immediately upon awakening before we even nurse! That’s saying something, ya’ll! Books were a great alternative to toys for us. 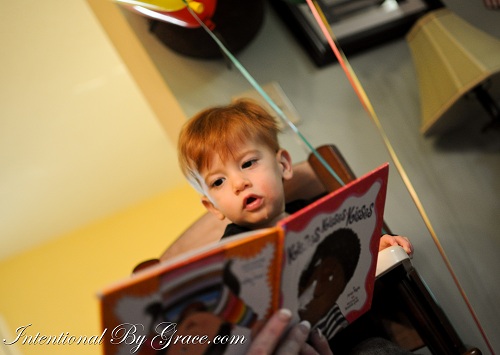 I had a black onesie on hand, which he has already out grown since his party. *sigh* I bought some fabric paint, and Mark followed these directions to make Samuel’s birthday party outfit. I also put him in black and white checked pants for his second party, but forgot to get a picture. It was MUCH cuter than this one in jeans.

Side note: We had two separate birthday parties. Not sure we’ll ever do that again, but we traveled to our respective home towns to celebrate with both sides of our family. It really was a blast! A lot of work, yes. But completely worth it. 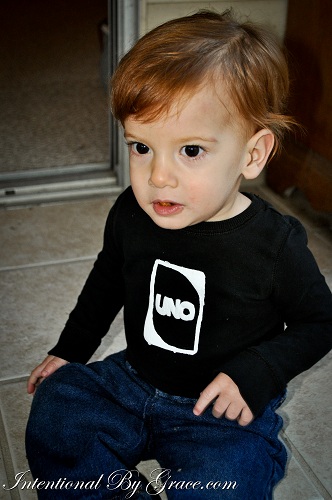 Decorations were very simple. I stuck with the red, blue, yellow, green, and black color scheme. 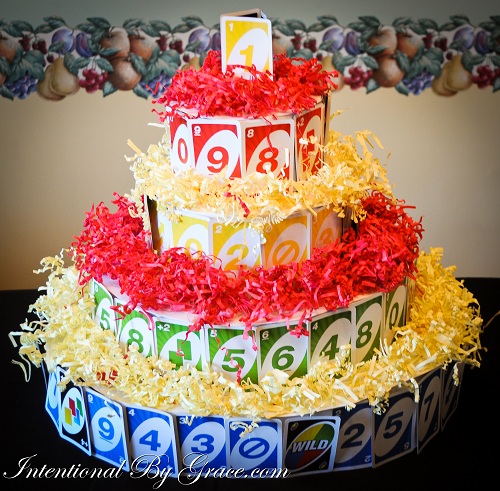 This UNO party cake was made from poster board, one deck of UNO cards, and shredded paper from the Dollar Tree. It was very simple, and took about an hour to put together. I taped the UNO cards onto the poster board in order to be able to use the deck later for playing. No need to glue them; scotch tape held them together just fine. I got the idea from here. 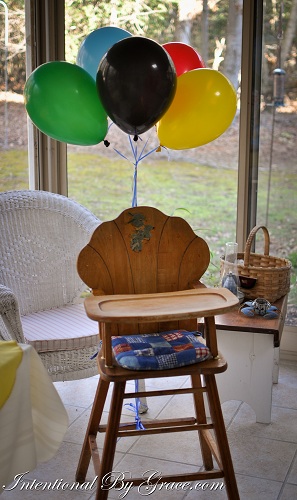 We put a few clusters of balloons around for a festive look. It’s a tradition for my family to hang balloons on the mailbox, as well. 🙂 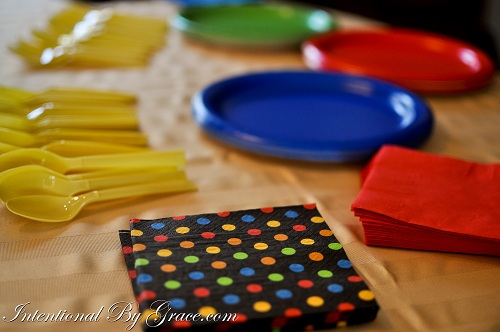 I found plates, napkins, cups, and cutlery at the Dollar Tree. I went with blue, green, and red plates with matching napkins, as well as those really cute polka dot napkins my mother-in-love spotted on clearance! We had yellow cutlery and black cups. Cute, huh?

The color scheme continued with our food as well. You know, food makes a mighty fine decoration, if done well. I think we did well. *cough* 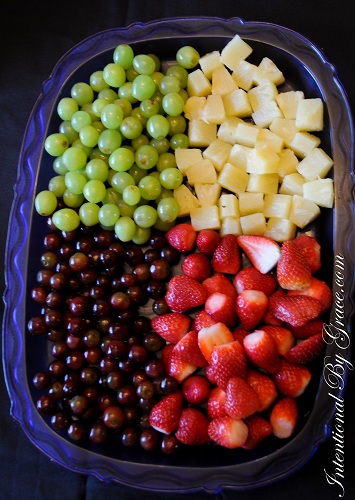 A wild card fruit tray was a fun touch. 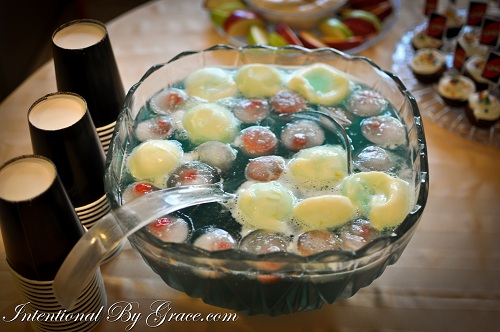 The punch was a nice bright blue with pineapple sherbert! We froze cherries in ice cubes to give it the red contrast. It wasn’t my favorite, but it worked.

Honestly? The cupcakes were my favorite part of the whole party. I used this recipe for the cupcakes and Samuel’s cake, as well as the icing (she links to her Vanilla Cream Cheese Icing toward the bottom). 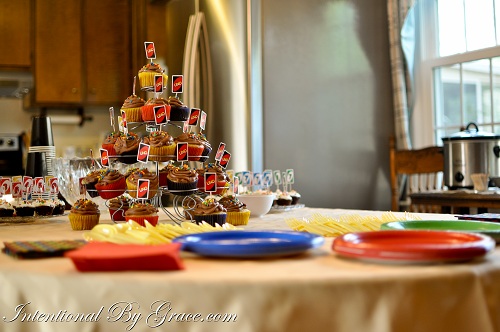 I wanted mini-UNO cards for cupcake toppers. You can find them at Party City or Amazon. We taped them to toothpicks, and they were absolutely the cutest thing ever! 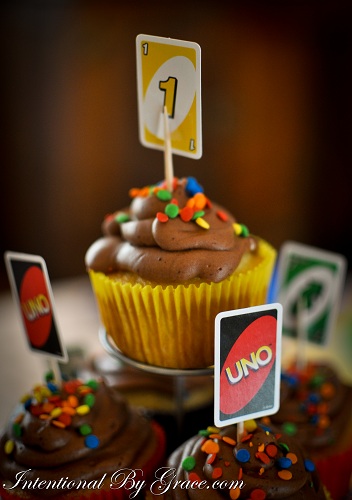 The cupcakes were vanilla with chocolate icing with yellow, blue, and red cupcake liners. The confetti sprinkles were absolutely perfect! 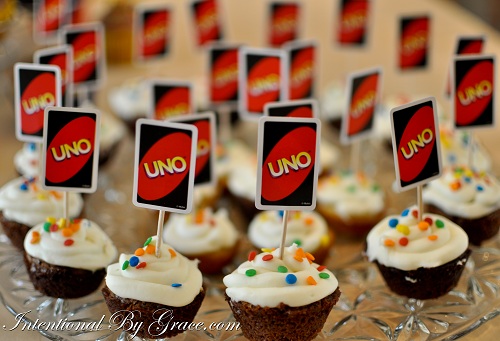 In addition, we did mini-brownies with white icing and confetti sprinkles. Oh my word, they were adorable. I mean really. I can say that even though I did it, right? Anything miniature is just so cute!

Since we had two parties, there were two birthday cakes. The first one I made green. 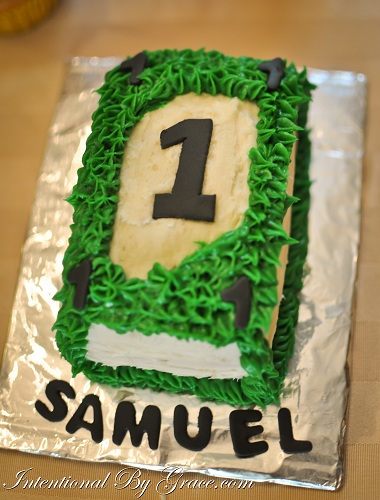 I thought it looked more like a football field than an UNO card, so on the second one, I opted for yellow. 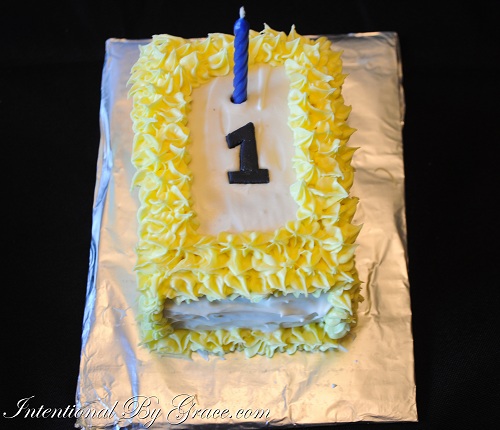 The yellow cake was a little more anti-climatic, for two reasons. One reason, Samuel was not feeling well, so he didn’t eat much. Second, because it was a pale yellow, it didn’t smear quite like the bright green did. 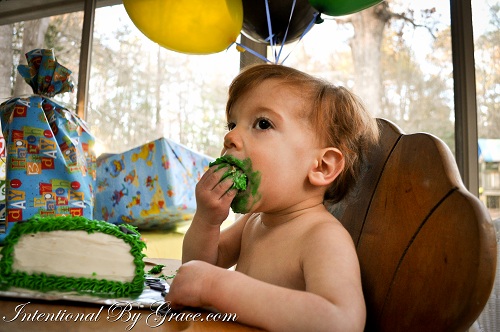 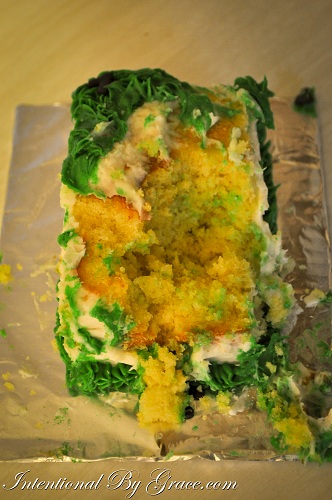 And with that, this boy had a party to remember! Welcome to the second year of your life, Samuel! 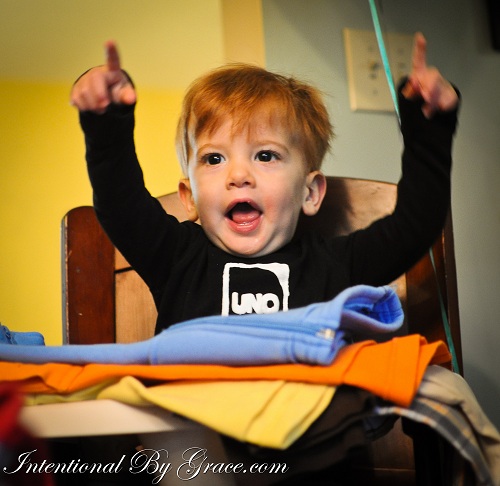