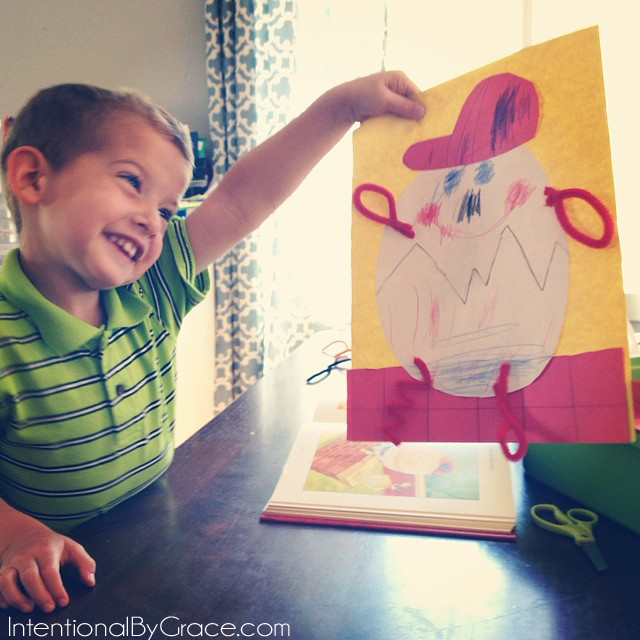 This summer, my toddler and I can often be found curled up with our Mother Goose Treasury of Nursery Rhymes reading and reciting some of my favorite childhood nursery rhymes.

Occasionally, we’ll even do a simple craft to go along with our reading for the day, which is exactly what we did with Humpty Dumpty.

My three year old thoroughly enjoyed creating his very own Humpty Dumpty, and I gave him a lot of creative liberties with this simple craft. 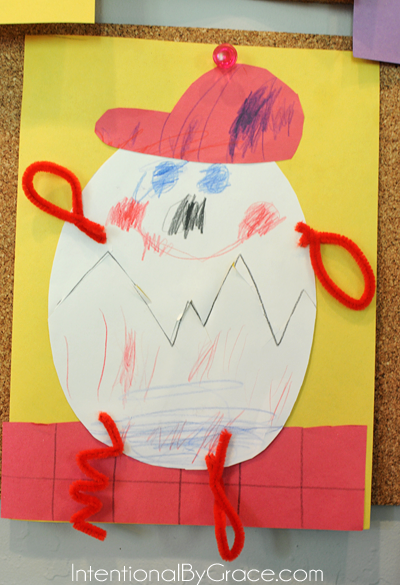 First, I drew an egg shape for my son out of white construction paper. Then, I let him draw Humpty Dumpty’s eyes, nose, mouth, etc. I offered googly eyes, but he insisted that Humpty Dumpty had blue eyes and the googly eyes were “not right, Mama.”

Next he insisted on giving Humpty Dumpty pants and a shirt (blue and red, respectively), which he proceeded to draw on with crayons.

Then, I free-hand draw a hat for Humpty Dumpty and helped my son cut it out. He chose to draw lines in the hat and color a bit.

Next, I drew a black zig-zag line across Humpty Dumpty’s middle. This is a great opportunity for your child to work on scissor skills! My son loved cutting the lines, and it was challenging enough to make it quite the accomplishment! He was so proud.

After Humpty Dumpty was almost complete, I helped my son cut a red rectangle out of construction paper (again, more scissor work), and we pasted it onto a yellow piece of construction paper. We used a black crayon to to draw bricks. He asked me to do it, but I could have given him some dotted lines to trace the lines himself (pre-writing skills).

We continued to say the rhyme over and over as we worked.

Next, we pasted Humpty Dumpty onto the wall and decided he needed some arms and legs. My son chose red pipe cleaners and I showed him how to bend them accordian style (hence the one leg that way). However, he had other ideas, and decided we should “make ropes so Humpty Dumpty could catch the King’s horses to come back and put him together again.” I couldn’t deny him this creative liberty, and so we made lassos for Humpty Dumpty. Even his foot had to be a lasso.

I loved watching my three year old’s imagination come out in this simple craft. By the time we were done, he had the nursery rhyme memorized putting one nursery rhyme closer to our goal of ten memorized by the end of the summer.

How to Apply the Gospel When Grief Strikes
Next Post: Dear New Mama Who is Pregnant for the First Time