Disclaimer: This is a birth story. One in which certain terms will be used in the hopes to give a complete and accurate picture of my experience. Please read at your own discretion.

It’s nine days after the birth of our little boy, and I am still amazed that he is actually here. We’re settling into a routine and adjusting much more quickly than I ever dreamed possible. What amazing grace! He’s snuggled into the baby bjorn now, and I’m hoping he will stay asleep long enough for me to get the bulk of his story written.

So here goes nothing …

Labor began looooong before his arrival was even on the horizon. At 38 weeks, we had a check up at Lisa Ross to check on his position. He was confirmed head down and very, very low. We went home wondering and making guesses on when he would arrive. Because he was so low, I was incredibly uncomfortable and truly wondered if I could make it to 40 weeks if he chose to take that long. Fortunately, call it the mother sense, I had a feeling it wouldn’t be long before labor would begin and our little boy would begin his descent into this world.

The night of our 38 week check up, first stage labor began. The contractions began that evening after dinner. While playing games, I began to keep track of my contractions. When the contractions were only 2-3 minutes apart, we thought surely they would intensify at any given moment. Alas, they did not, and we all went to bed a little disappointed. However, we were hopeful that tomorrow was a new day. Surely tomorrow would be THE DAY!

This went on for 7 full days. Contractions all day every day. They would get as close as 4 minutes apart, but they never once hurt. I thought surely this wasn’t what real labor would be like. Thankfully, I wasn’t naive enough to believe that it was “this easy.”

At our 39 week check up, Tuesday, January 11th,  we chose to let the midwife check our dilation and effacement. Much to our amazement I was 4 centimeters dilated and 90% effaced. Wow! The contractions I had been experiencing were actually doing something. We were so encouraged.

As the day wore on, the contractions slowed down. I took a nap around dinnertime because I knew I needed some extra rest. After dinner, the contractions began again. I wasn’t excited. To be frank, I ignored them entirely. I was very accustomed to the starting and stopping by this point. However, Mark and my sister were determined to help these contractions and this labor along. They were tired of waiting. So what did they do to take matters into their own hands?

At 10 pm, they cranked up the dance music and proceeded to have a dance party in our bedroom. I think we literally laughed me into active labor. Here take a look … 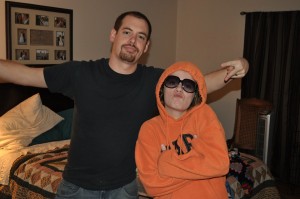 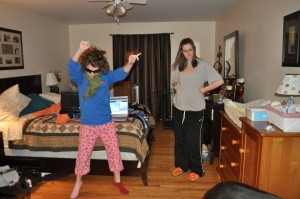 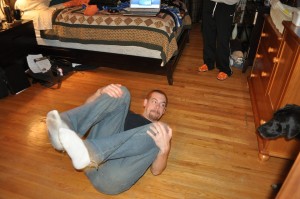 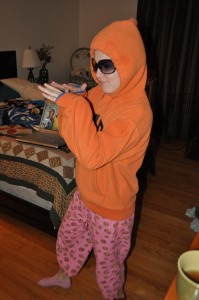 What a sweet memory we made that night. Obviously, we were goofing around and never dreamed that this was actually the night labor would begin. There is a video as well that I might post soon, but it needs a little bit of editing first.

In addition to the dance party, I drank a strong cup of Raspberry Leaf Tea, did some acupressure (thumb to the roof of my mouth), and we even did a little nipple stimulation. These are all natural ways to induce labor. I’m not sure I would ever do nipple stimulation again though. The reason is that it’s supposed to increase the intensity of your contractions to get labor moving along. I have to wonder if they were more intense because of the nipple stimulation. Unfortunately, I can’t prove or disprove this theory.

Once the dance party came to a close, we decided to pile up in our bed and watch a movie. Check out this sight to see … 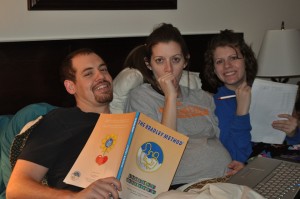 Mark was reviewing the Bradley Method of labor, I’m doing the acupressure, and Mandi is keeping track of the contractions. The movie is primed and ready to begin. However, we never made it to the movie. I simply could not get comfortable in the bed. I was restless and asked Mark to make me a hot bath. Something told me that I needed to relax and rest.

I dissolved into the sea of warm and goodness at 11:32 pm. I listened to music and just allowed my whole body to relax. Mark and Mandi took turns sitting with me as everyone else began to prepare the birth center bags – contractions were about 3 minutes apart. Mark intermittently warmed the tub for me, and took the liberty to call a midwife to let them know that we were having contractions 2-3 minutes apart (again). The midwife on call told us to continue doing what we were doing and call back in 30 minutes to let her know how we were doing.

Around 12 – something, things took the turn we had been waiting for. I felt my first active labor contraction and told Mark, this is it and I think we need to leave now. My contractions were 2-3 minutes apart already, and I will never forget my first active labor pain. It was … very different. I had one and then another and then another … Mark called the midwife on call and told her that things were definitely picking up and this was in fact the real thing. Come to find out the midwife we were talking to was already at the hospital with another birthing mom, and we would be meeting the 2nd on call, Lisa! I was elated!!! This was the midwife I had been praying for to be at my delivery.

Once out of the tub, I told Mark to have a talk with the ladies who would be attending the birth and let them know that I needed them to not talk when I was in the middle of a contraction. Each one then proceeded to carry out our plan with such perfection that even my planning brain couldn’t think of a single thing we had forgotten. I probably asked Mark a million questions in between each contraction, “Do we have food?” “Do we have blankets?” “Don’t forget my toiletries.” And with each question or statement I was informed that everything was already taken care of. I am so thankful for my amazing birthing team (Mark, Mom, Mandi, Susan, and Mary Beth).

At this point, the contractions definitley took extreme concentration, and leaning into Mark while swaying was the only comfortable position. Since they were coming one on top of the other, I began to worry if I was actually going to make it to the birth center. With each one, I’d stop and grab Mark and try to relax my whole body. They would subside and we would continue our rush to get out the door.

Now would be a good time to mention that our little southern town got its first REAL snow in years the night I went into labor. The roads were all covered in snow and did I mention … ice? Yeck! 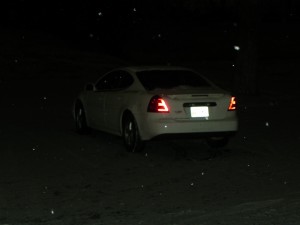 The ride to Lisa Ross is the only time that I cried during the entire labor. The bumps and railroad tracks were brutal to the contractions. They were not conducive to relaxing, and I felt every. single. contraction. with. great. intensity. Thankfully, we only live minutes from the birth center. 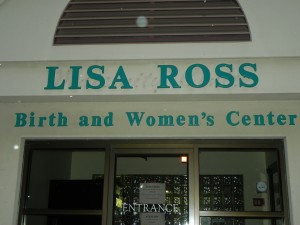 We arrived at the birth center at 1:30 am. Lisa began filling the birthing tub immediately. I got undressed and she checked my progress. I was 6 centimeters and 90% effaced. I remember thinking, “Only 6 centimeters? You have GOT to be kidding me…” However, I didn’t have time to dwell on this as the contractions got stronger and stronger and the infamous back labor began. I moved to all fours while I waited for the tub to fill. 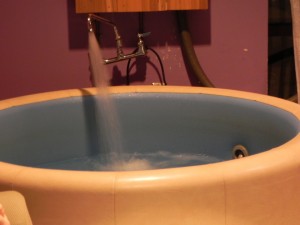 You can read Part 2 here.