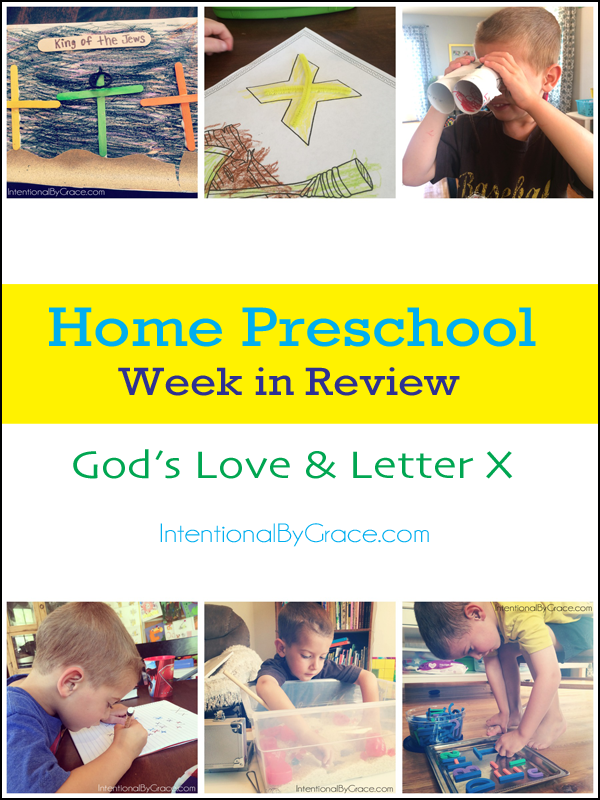 We have officially started homeschool preschool, and Samuel could not be more excited. After a couple of weeks of talking about it, Samuel was tired of talking and ready to “do school.”

For Bible time and character training, we use the Fruit of the Spirit Curriculum.

We read our story each day and practiced our memory verse. We talked about how we love because God first loved us. 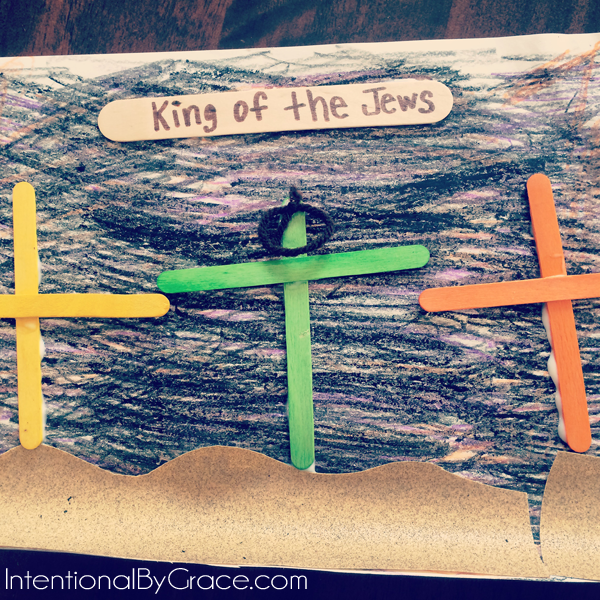 Then we made the above craft to go with the Bible story. I love seeing what my three year old comes up with!

We use God’s Little Explorer’s Preschool Curriculum for our base guide to lead us through the alphabet and additional preschool theme work. 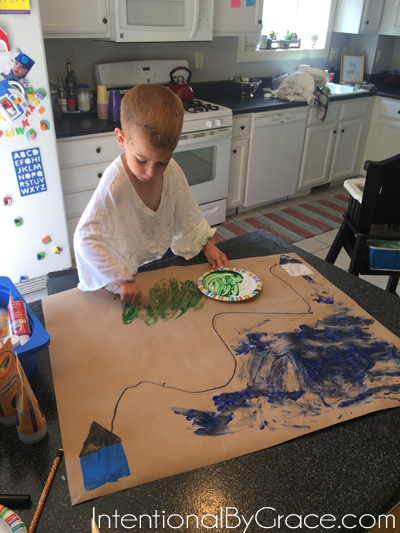 Samuel finger painted his treasure map that we’ll be using throughout the year. The blue house is our house and the white house is Heaven according to Sam. Again, I love seeing what he comes up with! He also surprised me. He’s NEVER enjoyed finger painting, but he really got into this time. 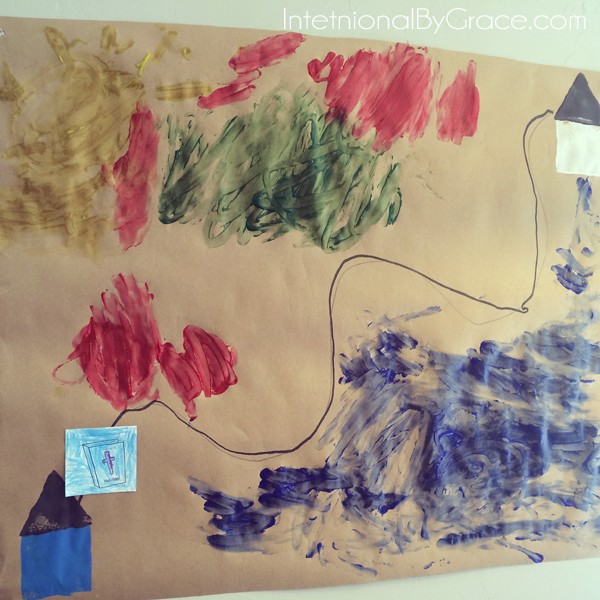 We colored our Holy Bible coloring sheet from God’s Little Explorer’s and added it to our treasure map. We talked about how God’s Word is a treasure. We also decorated our alphabet notebook to use throughout the year. This was especially exciting to Samuel. I’m not entirely sure why, but he loved decorating his own special notebook. 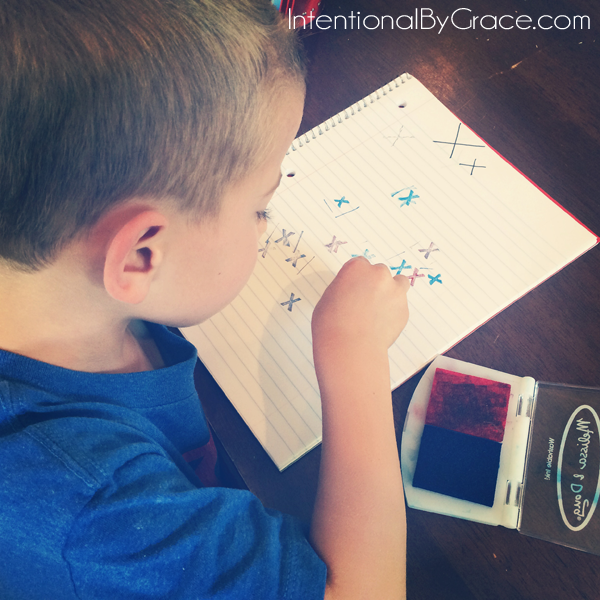 On another day, he asked me if he could write letter X’s in his alphabet notebook. He’s really into writing the letter X right now. He was before we started this week’s study, so he was excited to spend so much time practicing. Sam is nothing if not diligent when he sets his mind to something. I really don’t know where he gets that from … *ahem* 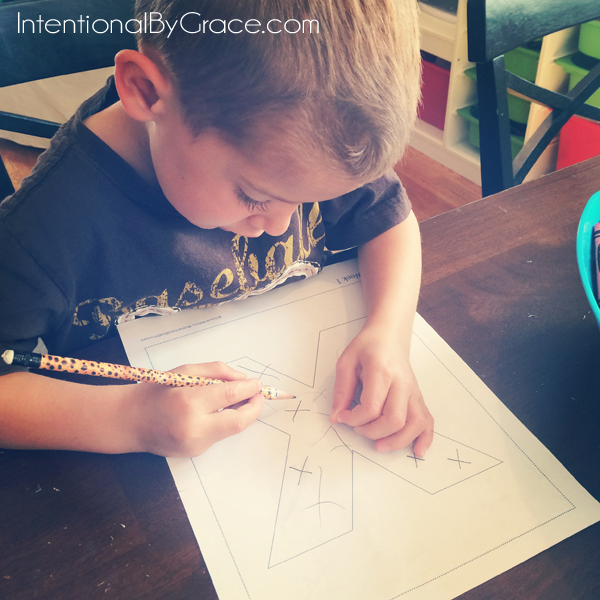 Again with some letter X practice in a different format. 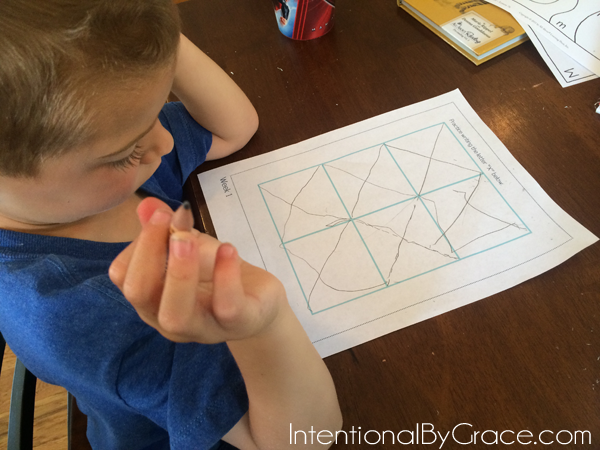 And more writing practice with the letter X. This one he didn’t understand enough to be able to do. He was getting frustrated with it. It was good to practice giving ourselves grace as we learn something new and what it means to try our best even if it’s not perfect.

We made binoculars to go on a shape hunt, but mostly he just wore them around his neck and played pretend.

We use All About Pre-Reading for our phonics work. Each day we found the letter X on our alphabet charts (upper and lowercase recognition). We also used our Leapfrog Phonics & Number Factory to practice the letter X and to sing the ABC’s. 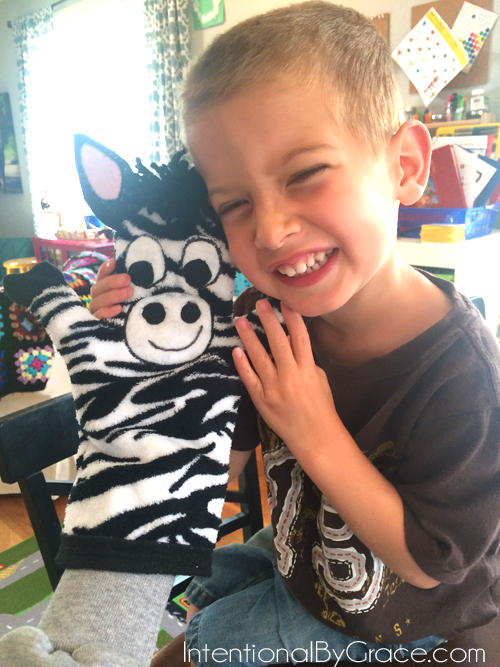 Instead of purchasing a Ziggy puppet, we had Grammy make us a zebra puppet to use for our lessons. Sam loves Ziggy! What kid doesn’t, right? 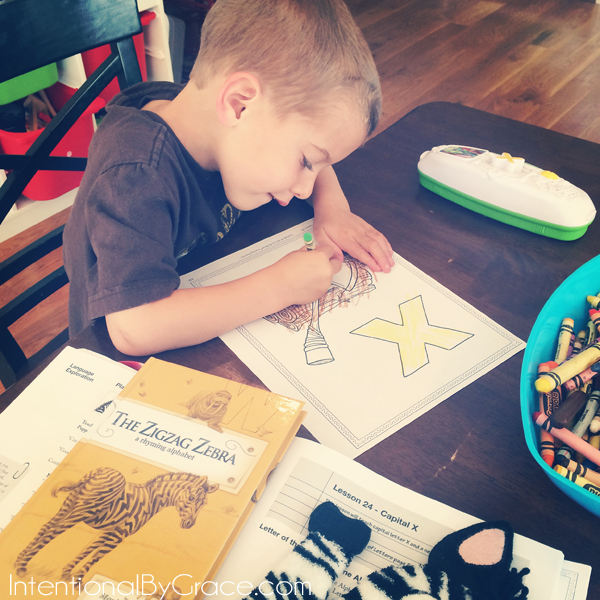 Sam loves the worksheets and go along activities in the All About Pre-Reading Program. It’s really simple to use, which means Mommy loves it too. I make copies of the day’s coloring/activity sheets so I won’t have to buy a new Student Book if we decide to go through this curriculum again next year. 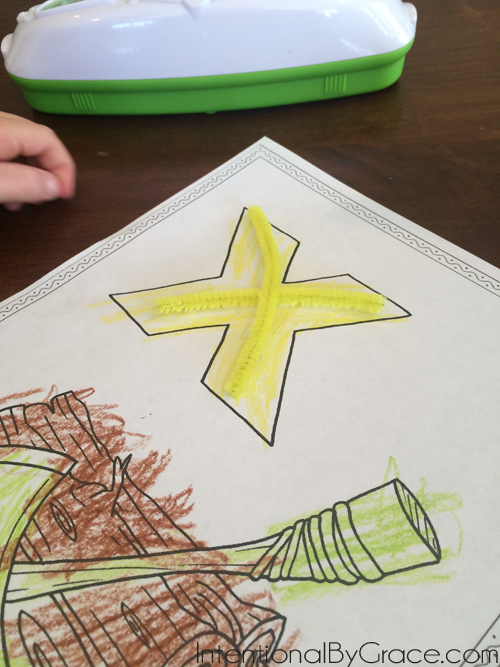 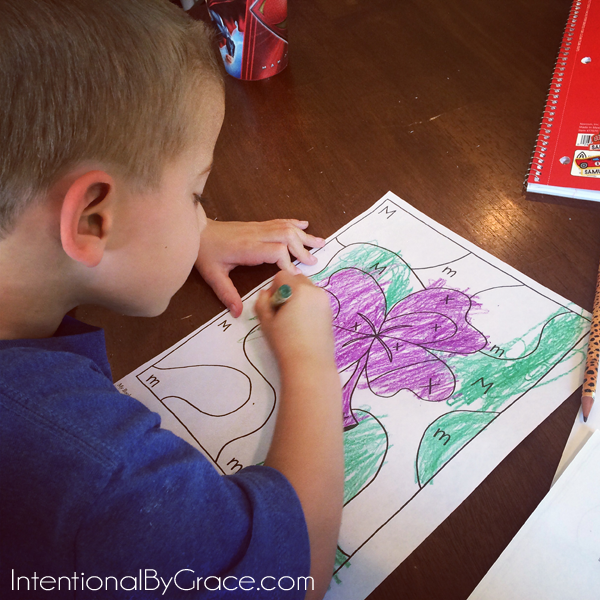 This coloring activity was harder for him. It was the first time he’s ever completed a color by letter activity. His hand was so tired, but he plowed through because he was really enjoying it. Great practice for building those little hand muscles!

Other fun preschool things we did … 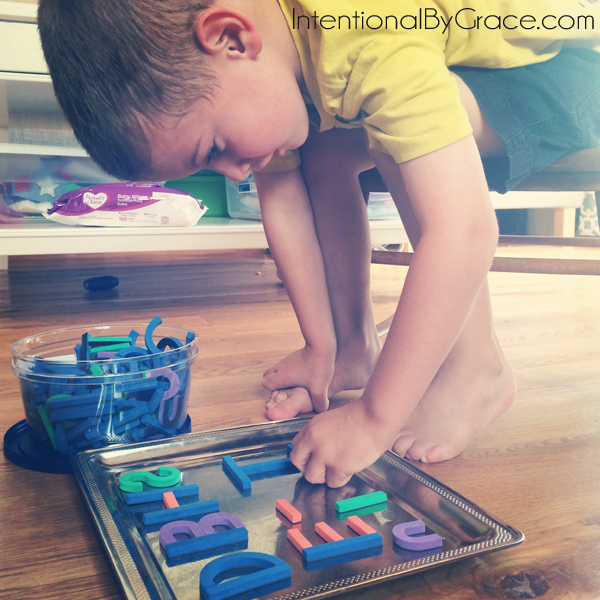 We used our magnetic letter construction set to practice making letters. He absolutely loved this! I got them super cheap off Zulily. He has been begging me to use them since the day they came in, so we opened them up one day this week.

He caught on really quickly, and we spent well over half an hour several times throughout the week just seeing what we could come up with. I had this laundry alphabet left over from when we rowed Jesse Bear, What Will You Wear? I have to be honest. He liked this for about eight letters, but then grew weary of it. We finished (because we’re also working on laziness), but I did not repeat this activity again. 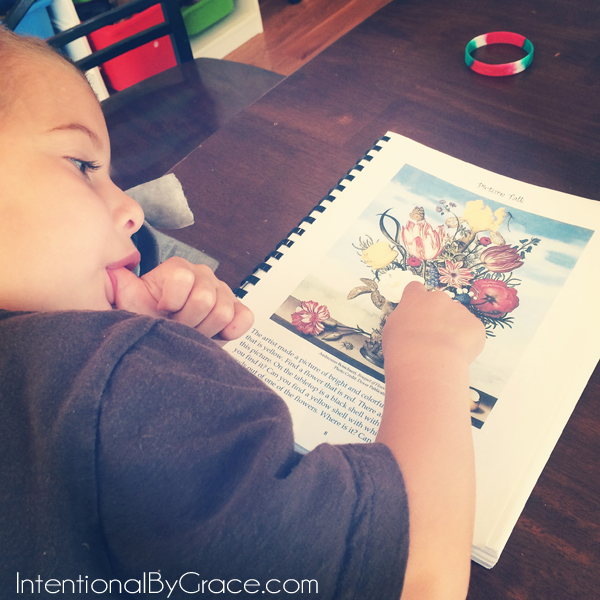 We are using The Way They See It for art study. We looked at this picture and talked about it for a little bit. I had him point out the yellow flower, red flowers, seashells, and we even discovered that the vase was sitting on a windowsill!This meant we were able to look through the window and find the tall buildings in the background and recall times when we’ve seen tall buildings.

We also found objects from around the house that matched the picture. I was going to have him try to draw flowers in a vase later in the week, but we didn’t get to it. 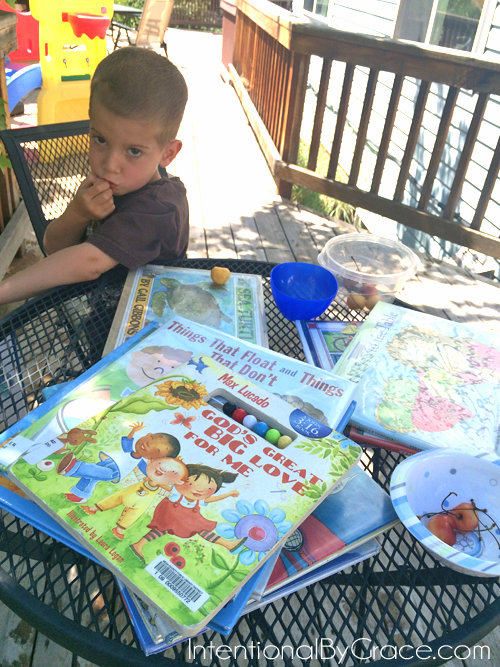 We read A LOT of books! Our favorite this week was God’s Great Big Love for Me by Max Lucado. He loved playing with the beads as we read, and he was able to retell the story to me by the end of the week. We also did a lot of reading outside!

We also discovered Geronimo Stilton books. We are loving The Race Across America right now! I didn’t think Samuel was ready for chapter books. We’ve tried a few times before, and he always lost interest (which was totally fine by the way!).

Geronimo won his little heart though. He begs for one more chapter, which is super fun!

We’re reading The Race Across America and The Wild, Wild West for our U.S. geography and history work. It’s a fun, living book that exposes Samuel to a world outside our little home. He loves rice sensory bins. I filled a small bin up with rice and added jewels, colorful rocks, and heart containers to the bin. He played for an hour the first day. 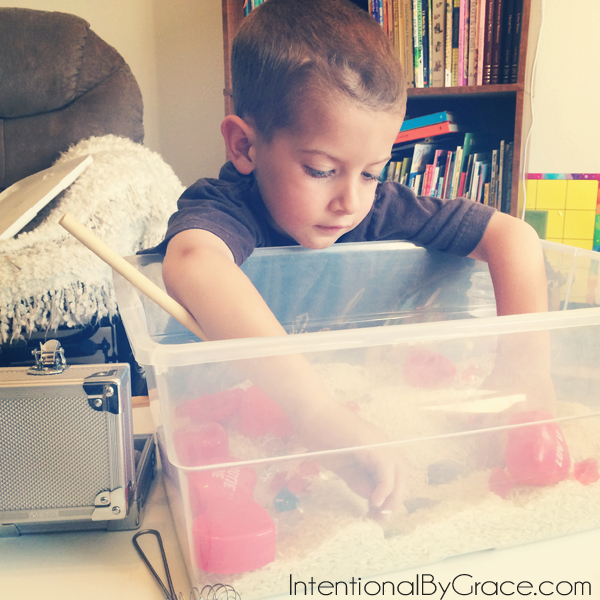 An hour the second day and half an hour the third day. Mommy got a lot done! These two boys love each other, and for the most part, play really well together. If they aren’t playing in their sand box, they are playing with our simple water bins I pull out.

I usually reserve all sensory/messy play for the afternoons. It keeps them occupied and learning while I prepare dinner or finish up some house work.

And that was our first official week of homeschool preschool!

Frequently Asked Questions About the Fruit of the Spirit Curriculum
Next Post: How We Did the Whole 30 Challenge with Kids {plus this week’s menu plan}