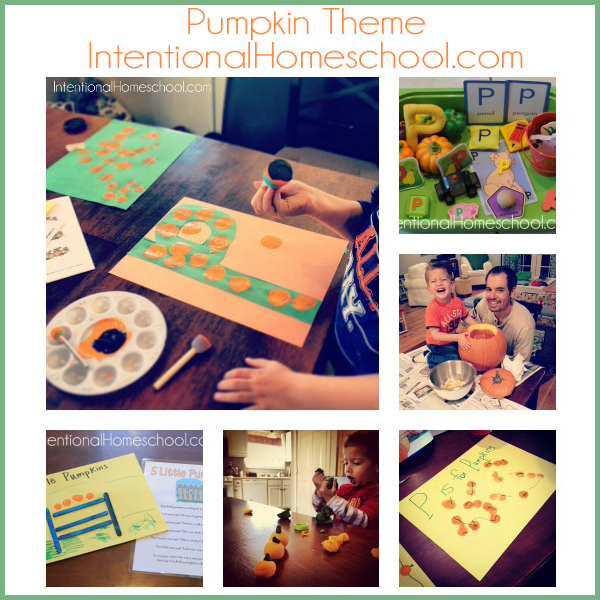 A couple of weeks ago we focused on the letter P during intentional toddler time while having lots of fun with pumpkins!

We are loving our letter sensory bins. Samuel continues to play through them throughout the week.

He started counting apples impromptu one day. He would line them up, count, mix them up, and repeat.

He also sorted the pumpkins, leaves, pine cones, and apples into like piles all on his own. Then he counted each item in each group. I love watching him learn through play!

We do a lot of coloring in our house. He loves it and it’s a great learning time for us. We worked on coloring pumpkins different colors. Instead of me telling him what to color each one, I pulled all the crayons out he would need. I let him choose a crayon and then he had to find which pumpkin had the color written below it. He did great!

He loves to cut. Loves it. It’s a daily activity for him to pull out his scissors (he calls them rizz-ers) and scrap paper and just cut. It’s a messy activity, but it can occupy him for literally hours! So I took this love of cutting and had him cut pumpkins along the gray lines. I then planned to make him match them, but once he completed the cutting the “right” way, he moved on to just slicing and dicing the rest. So much for a double learning tool.

We love the book, Too Many Pumpkins. To go along with the story, we used our orange do-a-dot paint to make a pumpkin patch. Then he used a green marker to draw vines on the pumpkins. Very simple, yet he loved it!

He requested play dough to play with one day. So we made a play dough pumpkin patch. We also talked about small, medium, and large. I had him point out each using pumpkins from our patch.

He has been begging me to paint … so paint we did. P is for pumpkin craft was simple. I just cut out the letter P from green construction paper and then gave him round, spongy paint brushes with orange paint to make “pumpkins.” After he had exhausted of the orange, he requested black. Funny how he chose black to go with the orange.

While we had the paint out, we also did the 5 Little Pumpkins rhyme (printable from 1+1+1=1) with a go along craft. We made a fence out of popsicle sticks and then used the sponge brushes to make five pumpkins. I originally planned on fingerprints, but he was NOT interested in getting his hands dirty. So we used our sponges… We added grass with some markers. He loved doing the hand motions with the rhyme. We did the finger play at least five times.

As I seek to teach him how to identify numbers and put them in order, we used a simple pumpkin puzzle. It’s over his head now, but I went ahead with it because 1) he’s interested and 2) it’s a great opportunity to introduce number identification in a fun way.

We used a worksheet form our workbook to talk about the color orange, along with all the letters that spell orange. He loved watching me write the letters. Then we colored the pumpkin orange.

Continuing with his love for pasting, we did a few pumpkin worksheets to work on patterns and size sorting.

Do-a-dot paint is still a favorite activity that is requested often. He’s very, very diligent about getting the dots in just the right spot.

Salt trays is a new addition to our tot school activities. I’m trying to incorporate more sensory activity into our weeks. Why? Because he plays with his food too much at the dinner table. Seriously. So I’ve tried to give him more outlets for exploring to keep him out of trouble at dinner. It’s actually working quite well!

We made a few letter P’s in the salt, but mostly he just played randomly. He loved the salt tray! He sat at the table just running his hands through it and playing for well over thirty minutes one day.

On another day, we did some painting. He was really, really into crafts and kept asking for more and more! We had so much fun. I loved watching him trace the letter P with the paint.

It was neat to see him really concentrate on the q-tip painting. This was the first time he actually did the activity correctly.

The q-tip printables are from 1+1+1=1, as well as the Pumpkin Preschool Pack.

Look at all that fun! We made a paper jack-o-lantern while singing another pumpkin song called Did You Ever See a Pumpkin? He really loved this song and we sang it often throughout the rest of the day.

He also did a pumpkin color-by-number sheet, but we used paint instead. He REALLY loved this. I got this from 2 Teaching Mommies.

Finally, we wrapped up our week with a family pumpkin carving night. We read The Pumpkin Patch Parable, which is a wonderful story that helps illustrate sin and how Jesus makes us new so we can be a light in the world. Samuel loved saying, “Slimey!” over and over again. He wasn’t really loving sticking his hand in and pulling out the seeds, and even let out a few involuntary gags. But he was a good sport and enjoyed the process of carving our happy, smiling pumpkin.

We had so much fun with our P is for Pumpkin week!

The Fruit of the Spirit Curriculum for Toddlers is designed to help you teach early learning skills to your child while instilling God’s truth. One week at a time (for 18 weeks), I will guide you through sharing the Gospel with your child through various Bible stories and learning opportunities. Click here to learn more.