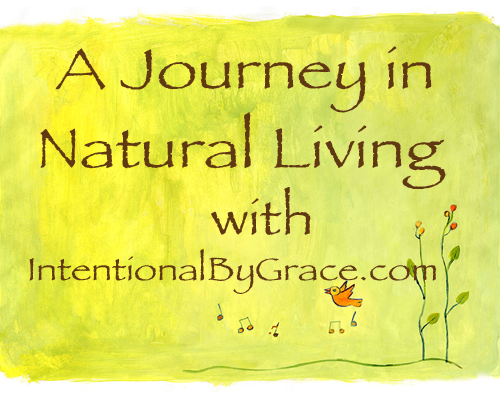 I talk about real food and natural living occasionally. I even wrote an eBook to help you create real food meals in just 20 minutes, but I’ve never told you why we made the switch to a more natural life style. Now that we’ve begun our Grace for the Pregnant Mom series, I feel like I need to back up and share my journey, my perspective, because much of our series will be filled with natural pregnancy help. I think you need to know where I’m coming from and why.

So can I share my story with you? Do you mind? It will be a little longer than the average post, but I didn’t want to split the story up for fear you’d miss one part or the other.

What We Were Doing

Mark and I are both milk lovers. When we first got married, we would easily go through a gallon of store bought milk a week. We even had the frequent shopper’s punch card. After you buy X gallons of milk, you get a gallon of milk free. There were many nights that we would share a glass of milk before bedtime. We were both elated that we had married someone with equal passion for consuming milk!

Oh, and cheese? We devoured cheese. Like the typical American, we ate it on our hamburgers, we added it to every casserole, and the best snack consisted of crackers and slices of (fake) cheese quartered into just the right size for a sandwich. Think about it? How often is cheese a part of your diet? Velveeta anyone?

To add to it, for dinner, we were eating a lot of boxed hamburger helper and macaroni and cheese, freezer dinners, and eating mostly Kraft products because I thought they had good recipes on their website. Our breakfast, if we even ate any, consisted of boxed cereal (Lucky Charms for me and Raisin Bran for Mark), or oatmeal packets you just add water to and stick in the microwave. Our lunches were mostly deli meat (whatever was on sale) and a slice of cheese with some mayonnaise slathered on. Our side item was usually potato chips. Our snacks were fruit roll ups, peanut butter crackers, cheez-its, and candy cakes. To drink, we always had a gallon of sweet tea and canned sodas in the refrigerator.

Without a doubt, we were consuming the SAD (Standard American Diet) diet with much fervor!

We ate (and drank) this way the entire first year of our marriage. During this year, we were befriended by a couple who told us that a lot of people had allergies to conventional milk, and that when they came off conventional dairy they stopped having sinus problems. We also heard them say that we should ride out sicknesses and let our bodies do what they were created to do. Hmph! They’re crazy.

At least we thought they were for a very long time.

If they said anything else, I didn’t hear them. I was too concerned that they might tell me I needed to give up my nightly  milk date with my husband because it was bad for me. Didn’t they see all the “Got Milk?” commercials? All I knew was they ate expensive food and there was no way we could ever afford it.

One day I got bored at work, and probably had a terrible stomachache from the double cheeseburger meal I had consumed on my lunch break,  and decided to do a little research on our friends wonky theories. I quickly discovered they weren’t the only ones who were crazy. There are others out there just like them!

Around this time we were quickly approaching cold and flu season, which was always miserable for Mark and me. We fought one sinus infection after the other and were rarely without a cold! Our friends? They weren’t sick; we began to wonder if they (along with the other Internet weirdos) might be on to something. However, we continued to buy over the counter cold and flu medicine and drank our orange juice faithfully. Needless to say, we never truly got better and we still got sick, very sick and we wondered if our diet had anything to do with it.

What Stopped Us in Our Tracks

In the fall of 2008, I found myself looking at yet another doctor who could do nothing but shake his head and offer more medicine. I didn’t want medicine. I wanted answers, but no one had any. I went to regular doctors, internal medicine doctors, and specialists. Yet all I got was another prescription for another set of pills. It was disappointing to say the least, and so utterly expensive it only made me angry!

For years I battled migraines, and now I was having major digestive issues. I was sick, tired, and in pain but no one could tell me why. I finally had enough when the only answer I received was to fill a $100 bottle of pills (that would only make it through four migraines) and a colonoscopy for more testing (which my insurance would not cover).

No thank you! I simply could not afford this…literally. I couldn’t. My husband was in grad school getting a stipend for meals as a Graduate Assistant, and I was barely making enough at my job to cover the necessary bills. I had to find another way.

And so began my journey into natural living and a new way of life.

We Were Forced to Change Our Lifestyle

In the end, we began to listen to our “healthy friends.” I emailed my friend with great fervor, and I read every health food blogger out there. I finally settled on two of my favorites with whom I still refer to often when I have a question – Passionate Homemaking and Keeper of the Home.

This, dear readers, is why we started this path of healthy, natural living.

I was sick – very sick.
We were broke – very broke.

But above all, God changed our hearts. He used our friends to teach us the basics of how our bodies work and how it related to food. We decided to give this way of life a trial run. If it didn’t work, we’d pray for God to provide the finances for medical treatment. However, we had a feeling that a new lifestyle and way of eating might just be the change we needed.

Our First Steps into Natural Living

Changing the way we thought about food and how it related to our health was not a quick (or easy) process. Yet taking control of our health consisted of learning to make better lifestyle choices and letting go of what we had always done.

During my time of intensive research, I read about how we are a microwave society and we are prone to comfort and ease. I formulated through my reading that it was sort of like a slow fade that we as a society are involved in when it comes to our health (and various other things, but we’ll stick to health for today).

Eventually, this slow fade had me sitting square in front of a husband who would most likely struggle with being overweight for the rest of his life, along with me who would forever have stomach issues and migraines.

I was not satisfied with sitting by and watching this happen. I’m not an accept the status quo sort of person (drove my mama nuts growing up). I knew that there had to be answers. No more sacrificing our health and vitality because we’re not willing to let go of what we’ve always done.

So Mark and I started small. Someone mentioned they didn’t use paper towels for two reasons:

1) To save money
2) To help preserve the environment

I realized that paper towels would most likely be one of the easiest, but hardest things that we would have to try. No, it’s not food. No, it doesn’t directly relate to our health, but it was an important step for my family toward natural living.

I informed Mark that we were going to try an experiment of going without paper towels. He looked at me like I was crazy. I urged him to try it for a month. He agreed to my shenanigans completely convinced that this was not going to go well.

Two weeks after we eliminated paper towels and had been using regular towels and rags, Mark said, “When are we going to start the paper towel experiment?”

I looked at him smiled and said, “Dear, we’ve been doing it for two weeks now.”

Needless to say, we’ve not used paper towels in our home on a regular basis since.

What does this experiment have to do with health?

These same lessons can be applied to health and nutrition.

Because of the society that we live in, we are so prone to believe the lies that it takes too much time and effort to change our diet or even way of life. We’re too busy to make our food from scratch is one of the lies I believed. Truth is it takes no less time for me to put together a batch of pancakes from scratch than it does to throw the ingredients together from the box. Think about it.

What lies are you believing when it comes to better health?

So we came to a cross road where we had to make a decision. Make a change or keep doing what we’d always done in hopes of obtaining a different result. We chose to start with paper towels (a little unconventional, I realize). We succeeded at eliminating paper towels within a few short weeks. It’s been almost a three years since we gave up paper towels for regular everyday use. We haven’t missed them for a single day (okay, that’s not entirely true…potty training would have been nice to have them).

Baby steps are the best way to healthy living.

We’re not perfect at this whole natural living thing, but we’ve added one new healthy habit at a time. We intentionally seek to steward our health while resting fully in God’s grace.

We didn’t make all the changes at once, and we haven’t made all the changes we’d like. But each day, each week we grow in our stewardship of our health. We seek to help our children grow in making healthy choices, and we’re grateful the Lord opened our eyes to what He has provided for us nutritionally in order to build our bodies up for His glory!

So that’s our story into natural living! Thanks for hanging with me!

I’d love to hear from you in the comments. Have you made the switch to real, whole foods? What’s holding you back? How can I encourage you in your journey?