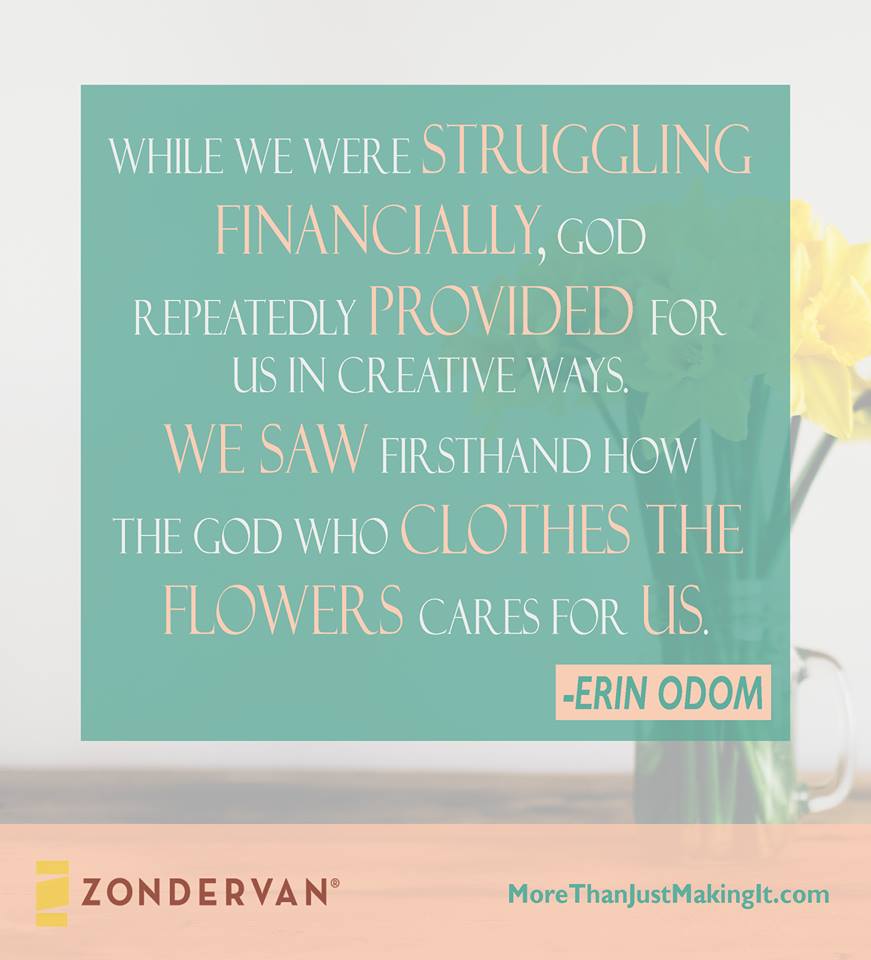 For years I have wanted to share our financial journey as a family, but for one reason or another I never have. I’m not sure why except that I wasn’t sure how. I’m still not sure how.

It’s amazing to me to look back at my 19 year old self, standing in my very first apartment. It was a single room with a bathroom in the back. The kitchen was concealed by accordion style doors, and I rarely opened those doors because if I did I was sure to see hundreds of roaches scurrying away.

If I did decide to brave it, I would bang the doors several times before parting them to grab something from the fridge because it was easier to give the varmints a head start. At least I wouldn’t see them scurrying, just hear them. When all was silent, I’d open the door to grab a cold soda from the fridge, then slam it all shut and do the “heeby-jeeby dance.”

It was disgusting. Embarrassing even. But it was mine and I could afford it on my own.

When I went to shower, I had to choose whether I was going to wash my hair, my body, or my legs. There was no doing all three at the same time. The water tank would run out of hot water within a couple of minutes, and the ice cold water would sting like needles.

I had a single mom living over top of me with five children. All squeezed into an identical apartment size. I mourned for them and longed to be able to help, but the banging over top of me as I tried to study for exams was unnerving. I lost two mirrors and three picture frames that semester because they fell off the walls and crashed after another fight broke out above me.

Then I came home one night from taking an exam to find my window smashed, glass shattered everywhere. My laptop was gone. What little jewelry I had accumulated through gifts and inheritance stolen. Everything was ransacked and gone. The police took my report, but the list of valuables was short and honestly not worth their time.

But now there was nothing there to “afford.”

This is where my financial story starts, and to be honest I had no idea it wasn’t normal. I just thought all college students were poor and had roaches and lived in one room apartments on a corner where the homeless met to share their meager meals from the area dumpsters.

To be totally truthful, I think living where the homeless gathered kept me blinded because I had a roof over my head, even if it did shake and rattle. I had food in my pantry, even if I had to scare away the roaches to cook it. I had a shower, even if I had to rush through it before turning into an icicle.

Yes, there were days my stomach rumbled with hunger and all I had was an expired bag of popcorn to eat. Yes, I slowly became aware that I had to make a change, and yes, the break in was a huge wake up call.

I was naive and determined to make it on my own though.

My parents raised me to persevere and never give up. They raised me to live on my own two feet. They raised me to work hard and do my best. I wasn’t going home with my head between my legs just yet. Plus I needed a lot of gas money to get home, and I didn’t have enough to get there. I’d just have to walk to class and pray for a miracle.

I don’t know if I prayed, or what happened in that time. Memory doesn’t serve me well. I just know that through a friend of a friend I caught wind of a restaurant hiring new servers, and by God’s grace I got a new job in a hopping place that brought me into a new income bracket.

I started making more than I needed, and I was able to move out of the roach infested apartment into a little safer neighborhood closer to my job. I was able to work more hours, continue my classes, and even have a little extra left over each month.

Financial distress hits most all of us at one time or another.

Some of us struggle through for longer than others.

I’ve since gotten married, moved nine or ten more times, added three little mouths to feed, and endured several more job changes and varying seasons of financial stress and seasons of plenty. Like many of my peers, my husband and I felt the blow of the economic crash of 2008.

Right now we’re in a season of plenty. But those seasons of less, and barely just making it, are still fresh in my memory. I’m glad of that. I pray I never forget, and I wish I could just share my whole story with you. 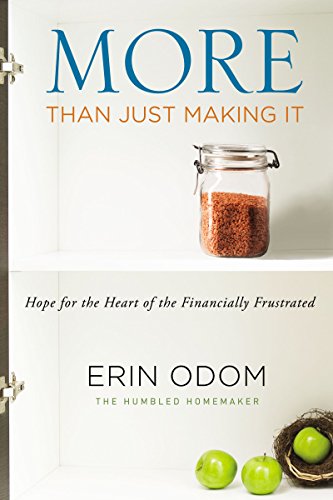 This is why I’m glad my friend, Erin from The Humbled Homemaker, wrote her book, More Than Just Making It.

This is a book that I think we can all identify with at one point or another even if we’ve never had to stand in line for food stamps or filed for bankruptcy.

More Than Just Making It tells the story of Erin and her family’s breaking point as well as the secrets of their comeback. God in His grace has led the Odoms’ into a season of plenty, and Erin shares just how He has provided along the way in this wonderfully, thought-provoking book.

It’s taken a lot of hard work, creativity, and faith in God’s provision to reset their bank account as well as their hearts, but in More Than Just Making It, Erin passes on the tips and habits that enabled her family to put 30 percent down on a home, pay cash for a minivan, and send their daughters to private Christian school.

By God’s grace, my husband and I have paid off more than $30,000 in debt in our time since saying, “I do.” We followed many of the same paths the Odoms’ did in digging our way out, and I think that’s why I loved this book so much. It felt a little like reading my own story.

If you’re struggling to make it right now, know that you aren’t alone.

More Than Just Making It is a remarkable account of one family’s fight to regain financial freedom after encountering devastating losses. In this candid, humble, and thought-provoking book, Erin sheds light on the silent sufferers among us – the working poor. I will never look at government aid the same again. This is a must-read for every follower of Christ. 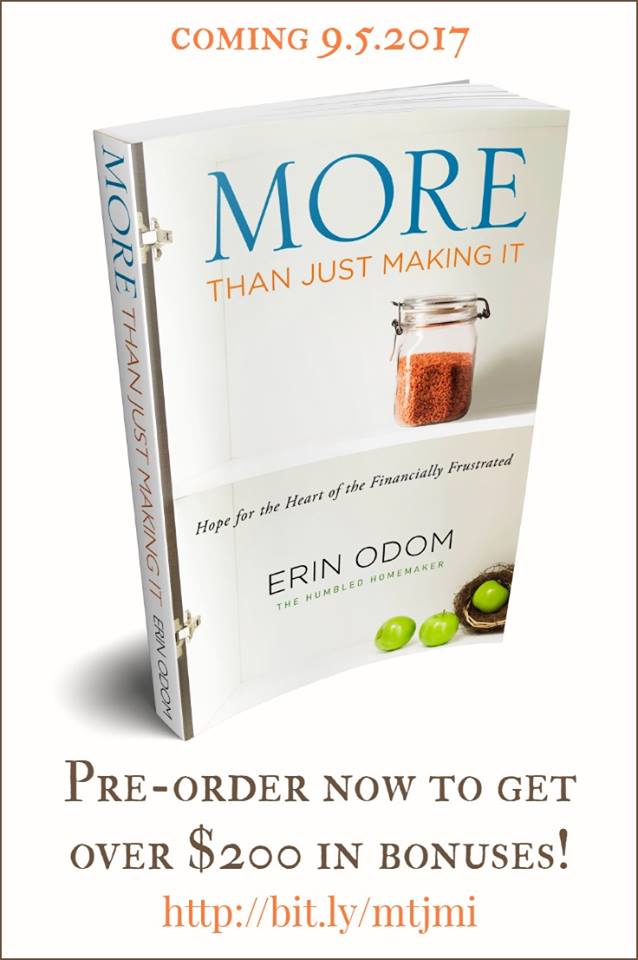 You also can enter a mega giveaway to win $2650 of Erin’s favorite things in prizes … click here for details!

I am a part of Erin’s launch team for More Than Just Making It. I agreed to share about the book in this blog tour, but truthfully, I would have shared anyway. I have abundant respect for Will and Erin Odom, and we love her family and her story. May God be glorified as her book releases, and may many come to know Him.