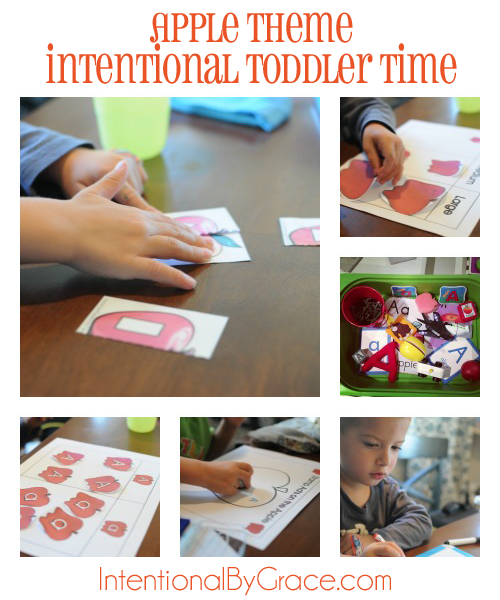 We decided to take a break from our Before Five in a Row curriculum this week to have a little fun with apples. Samuel has finally taken an interest in letters, and I wanted to take advantage of this interest. I decided to do an apple theme week since it’s apple picking season and focus on the letter A.

Because we live in the High Rockies, there is not a place within decent driving distance to go pick our own apples. So we spent a lot of time at the store looking at the different apples and choosing which ones to bring home. I’m still not used to this idea … I miss the south often when it comes to picking your own fruit. 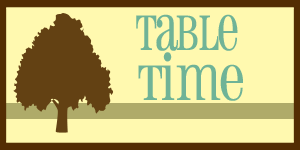 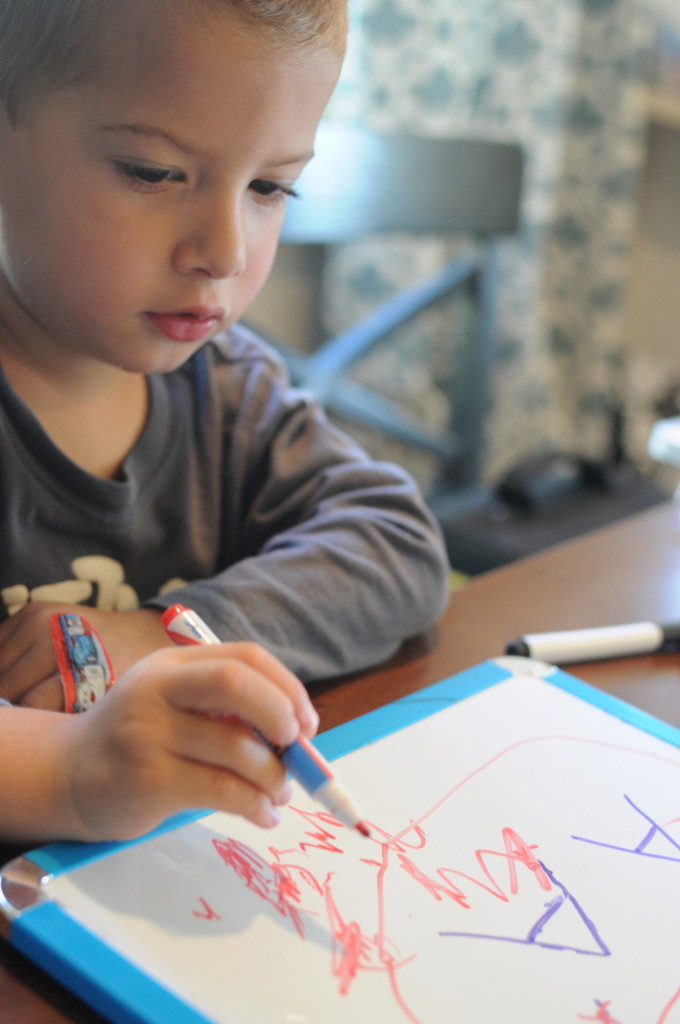 My sister-in-love sent a care package to us a few weeks ago and in it was a dry erase board and marker. Who knew that a toddler could love something so simple! We have used this little tool non-stop since we received it. He absolutely loves to “write letters”; therefore, most of our time was spent on this activity throughout the week. I love to see how his writing has now progressed to scribbles. He tried to make a letter A several times, which was cute as a button to watch. 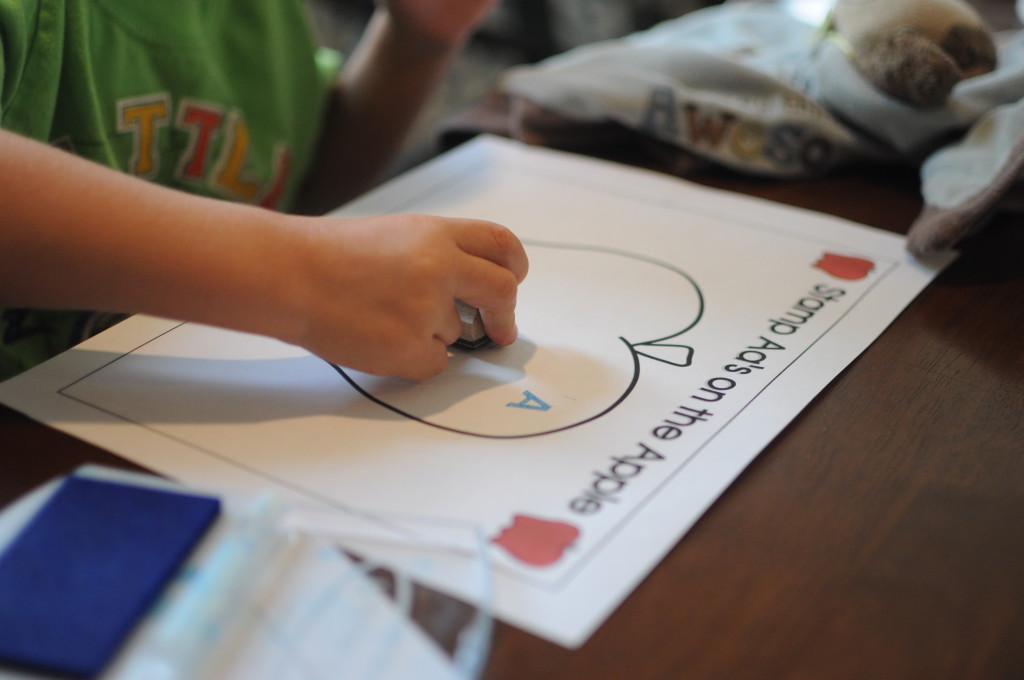 We stamped the letter A on the apple, which he surprisingly really enjoyed. This has been hit or miss for him in the past. But it was a big hit this go around. 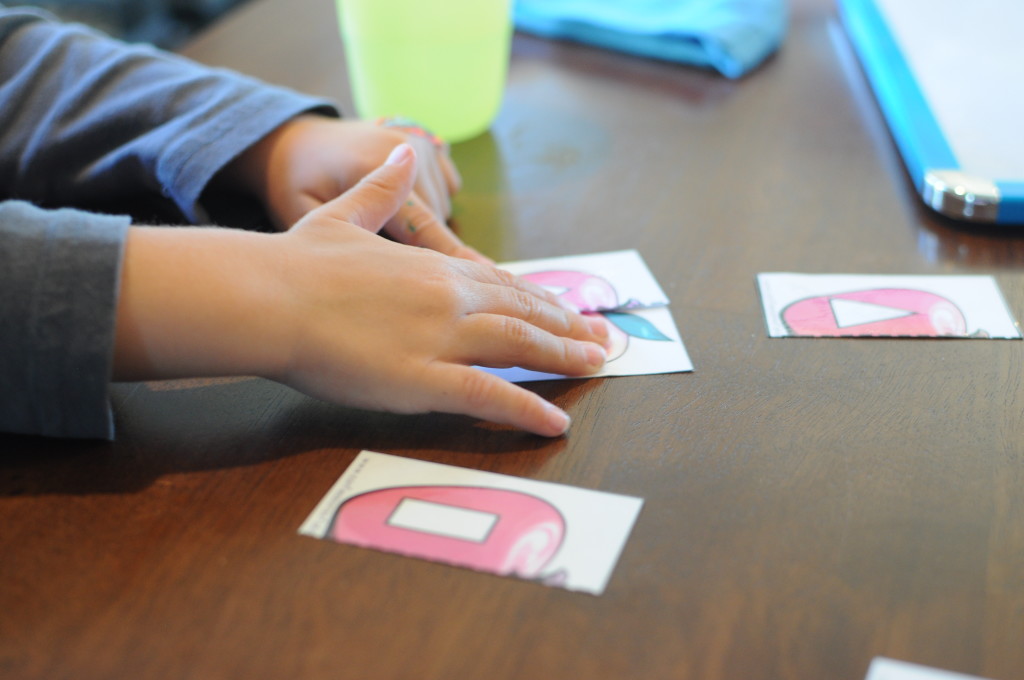 Several times throughout the week, we worked on shapes with this simple shapes matching game. He recently started getting triangle and star mixed up along with oval and circle. I find it so interesting how little ones will master a concept only to regress and restart the concept all over again. By the end of the week, he had them sorted out again though, which is why I love hands on learning! 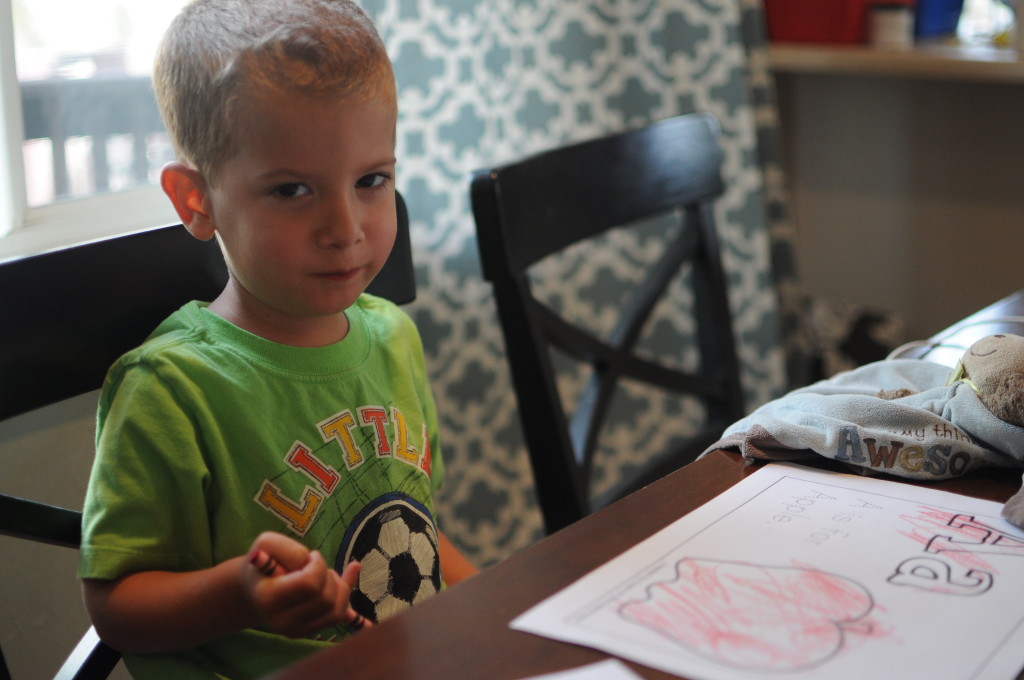 He’s getting better and better at coloring. Got to love the look he’s giving me. 🙂 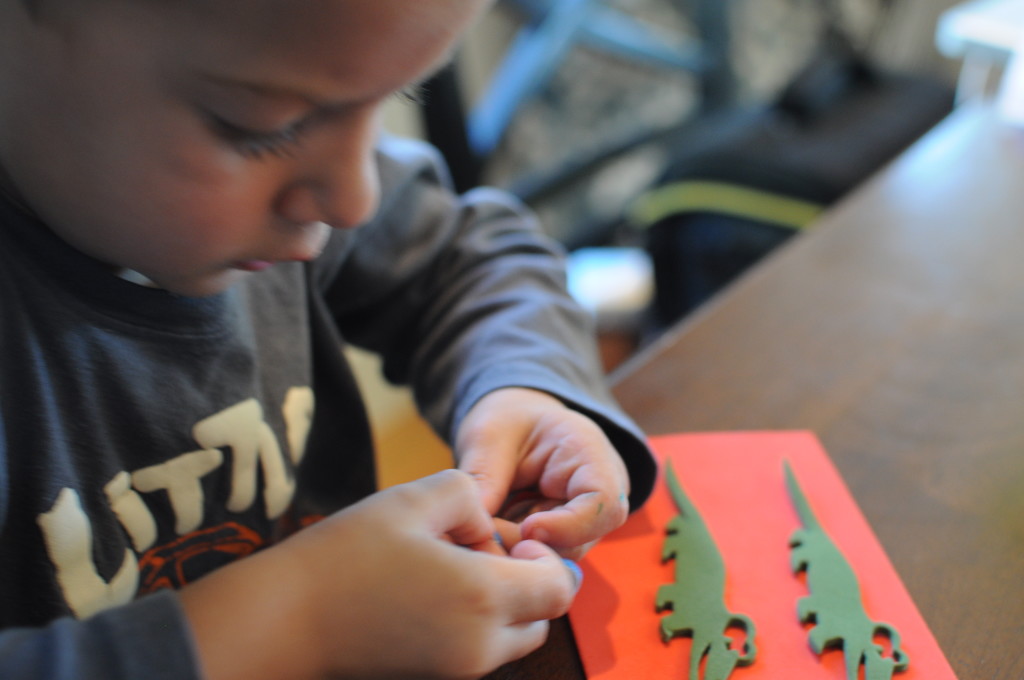 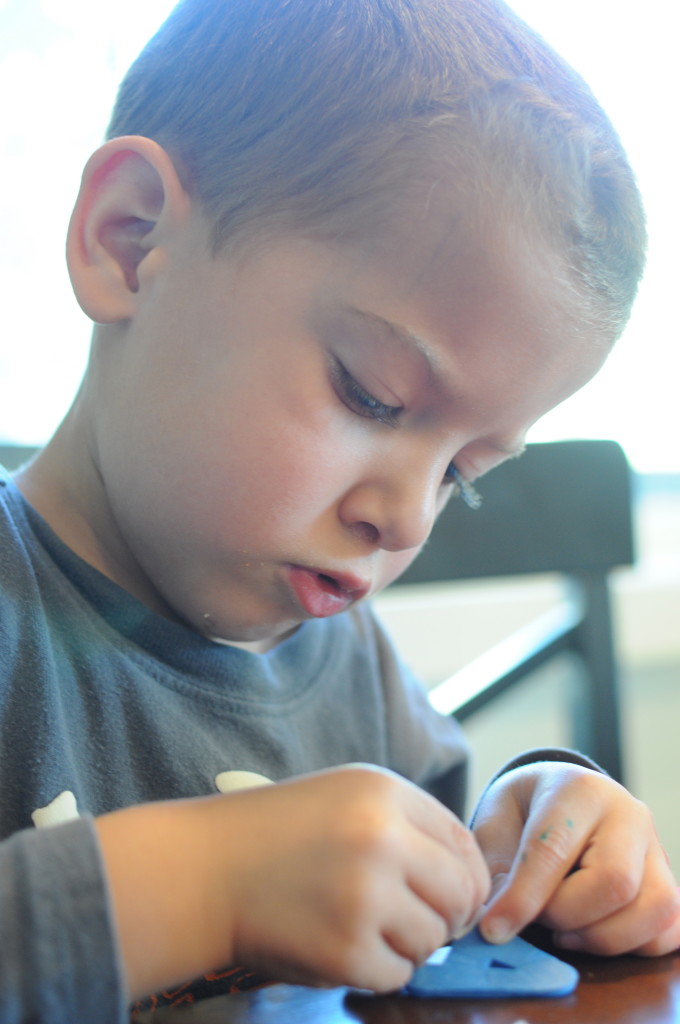 To continue reinforcing the Letter A, we did an easy foam sticker craft. We simply stuck alligators and letter A’s to a sheet of foam. This was also a great activity to work his fine motor skills since he was eager to peel the stickers himself. 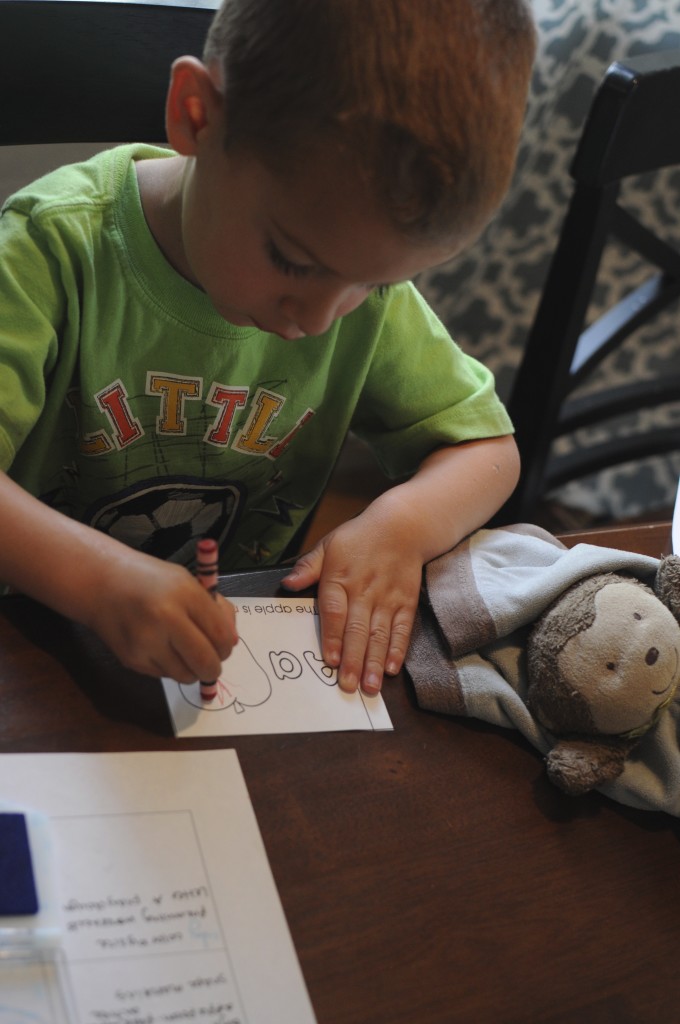 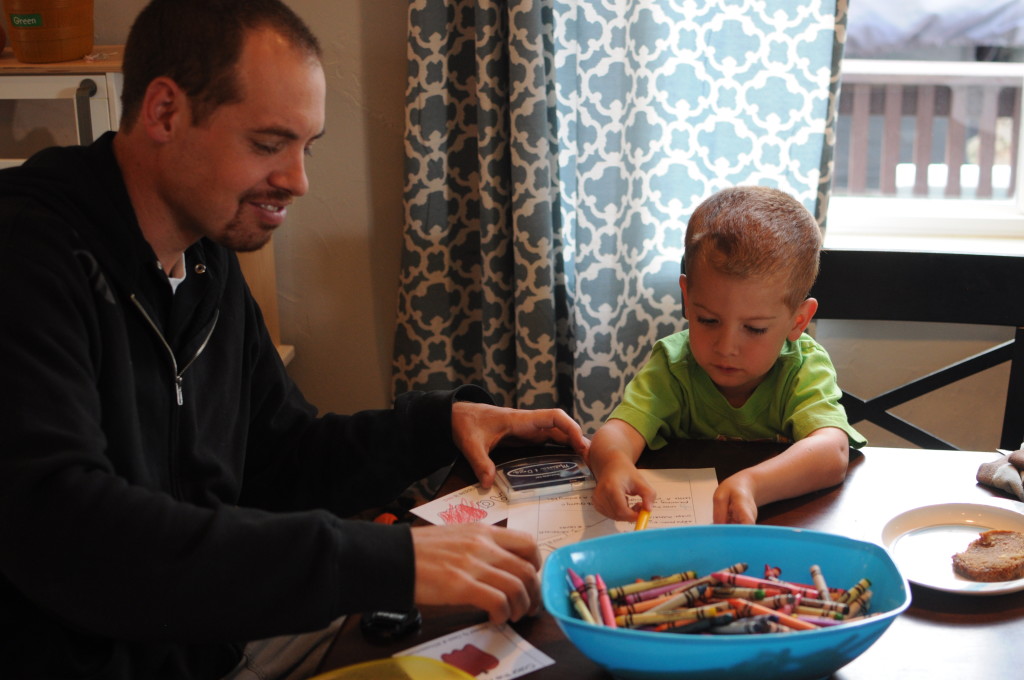 Since he was on a coloring kick, we did a Letter A mini coloring book. Daddy got in on intentional toddler time for this activity. I think it was because eating apple cake was involved. 😉 Samuel loves when Daddy joins us! 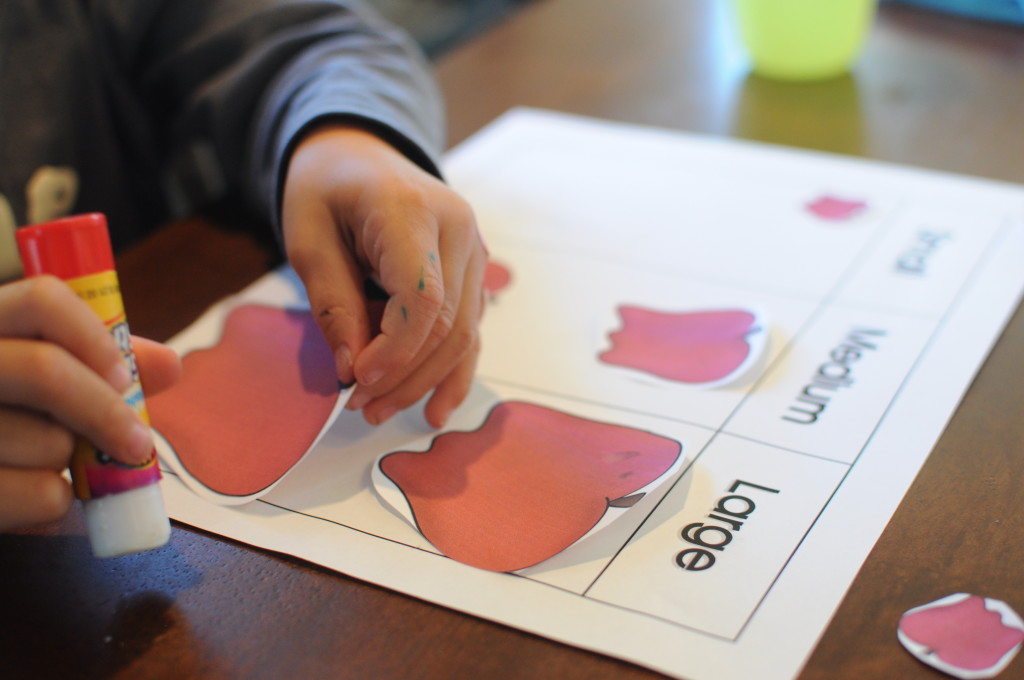 My little guy loves pasting! So we put this interest to good work and did some size sorting with apples. He did a great job!

In addition, we sorted Big A’s and Little A’s while pasting them on our piece of paper. Again, he did a wonderful job and caught on to the activity quickly. 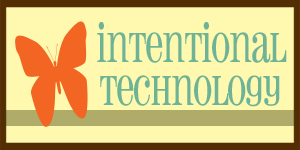 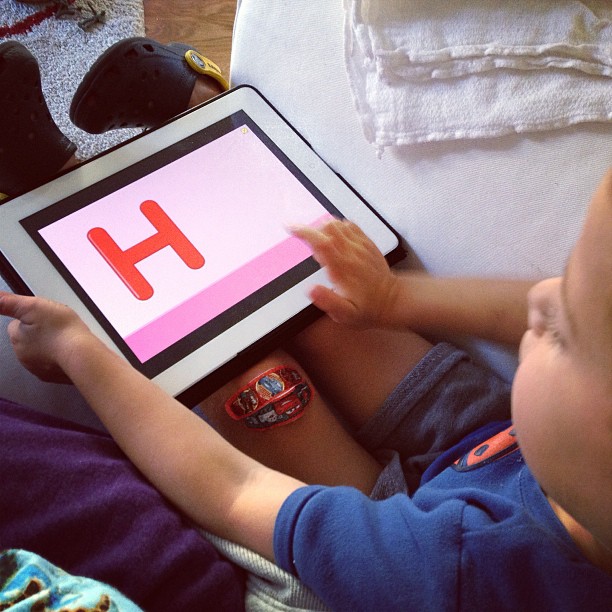 We love the Starfall iPad app. We love using our iPad for intentional learning time. You can see all the apps we use in this post: Early Learning iPad Apps for Toddlers. We did the Letter A activity first, but I failed to get a picture. We don’t always do just one letter. We play as long as he is enjoying himself. I’ve also learned this is a great tool to use when I’m nursing my newborn! 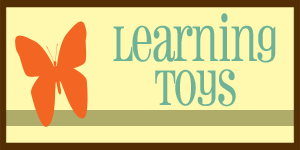 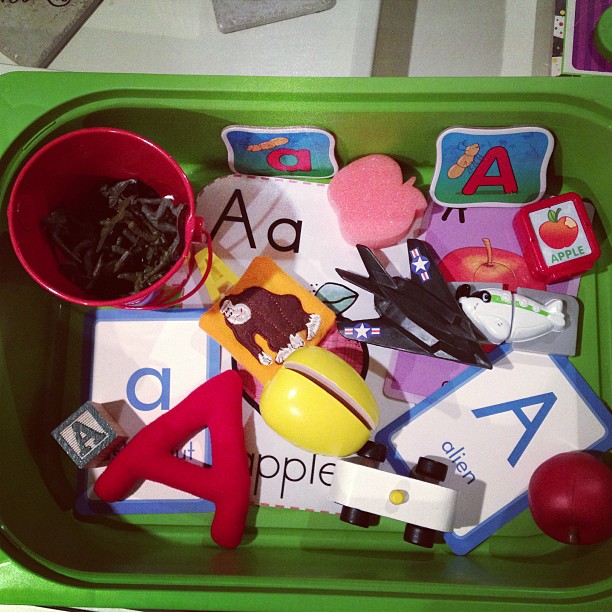 I created a Letter A Sensory bin for Samuel to play with throughout the week. I collected all the items I had that started with our letter of the week. I got the Hands on the Alphabet idea from Carissa at 1+1+1=1. You can read more about how I use my bins here.

I wasn’t so sure Samuel would have anything to do with his bin. But I put it out for him to see what he would do, and I was shocked! He loved it and played with the items in the bin often. He would pull it out when I was nursing (the bin is close to the rocking chair). We would talk about what was in the bin and play with the items together. He loved it! I’ve decided to make this a weekly addition to intentional toddler time. 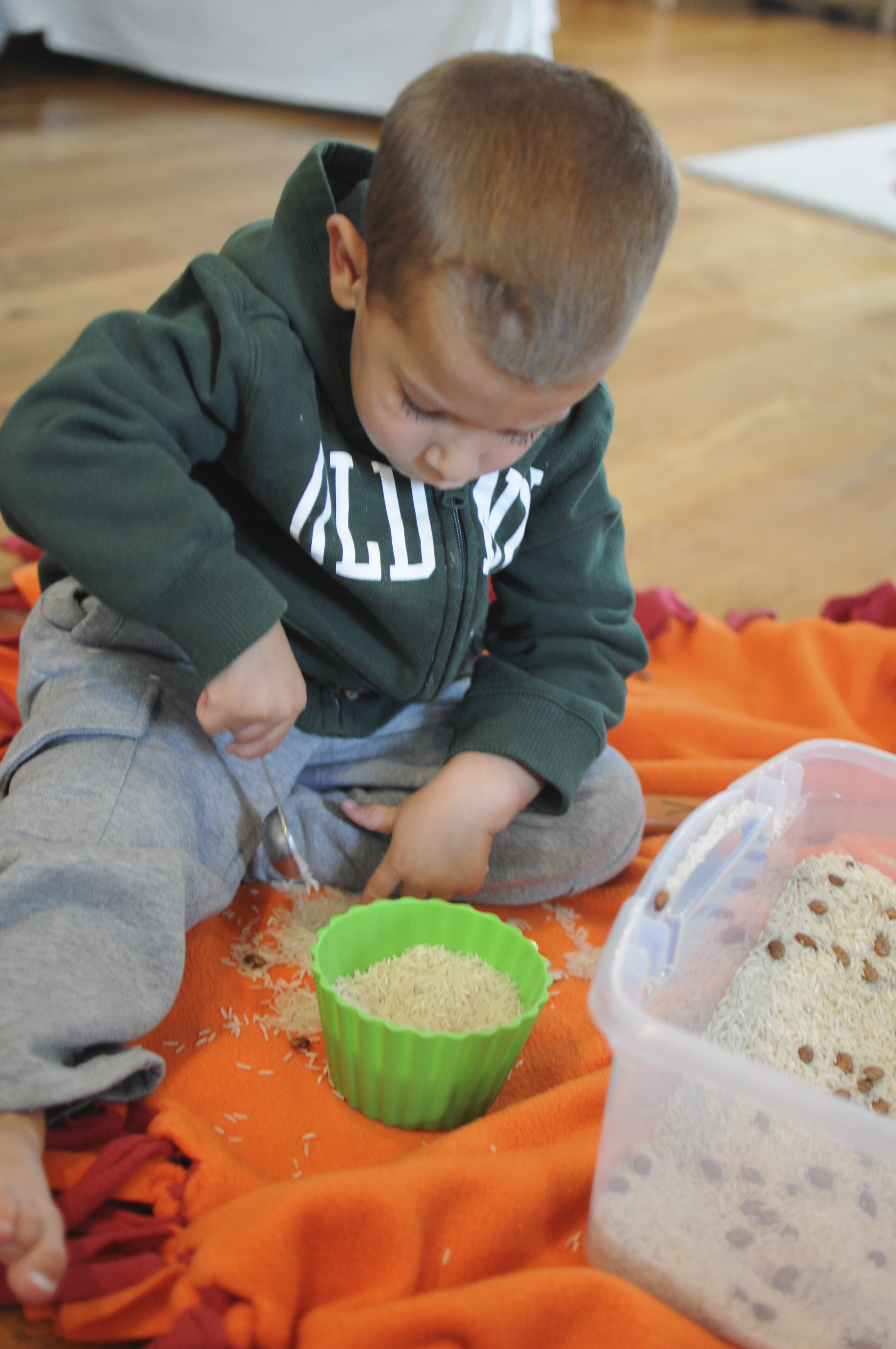 Our rice and beans sensory bin has been incredibly popular for several weeks. He will play for thirty minutes at a time scooping and pouring rice and beans from one container to the other. This was used A LOT this week. 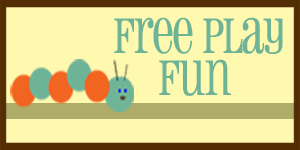 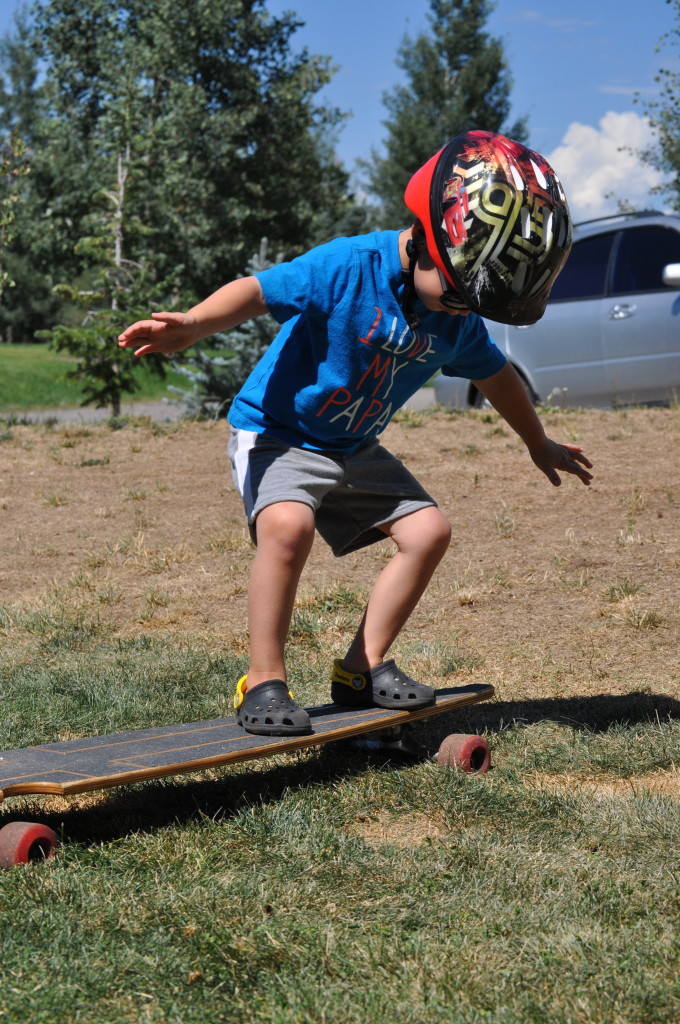 We enjoyed a lot of outside play time. He has taken an interest in his Daddy’s skateboard. It was so cute watching him skateboard down the hill in our yard. 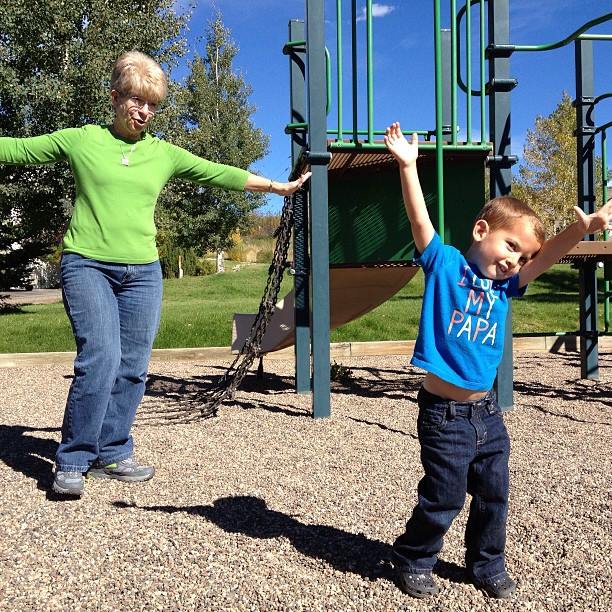 I loved this impromptu learning opportunity. While at the playground with Grammy one day, an airplane flew overhead. I asked Samuel what airplane started with and he said, “A is for Airplane!” We didn’t even really “talk” about airplanes during the week, but it was one of the toys in his letter bin. He grasped the concept through our mini play sessions! Then Grammy and Sam flew like airplanes around the playground for the next fifteen minutes. 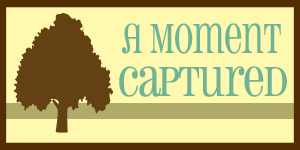 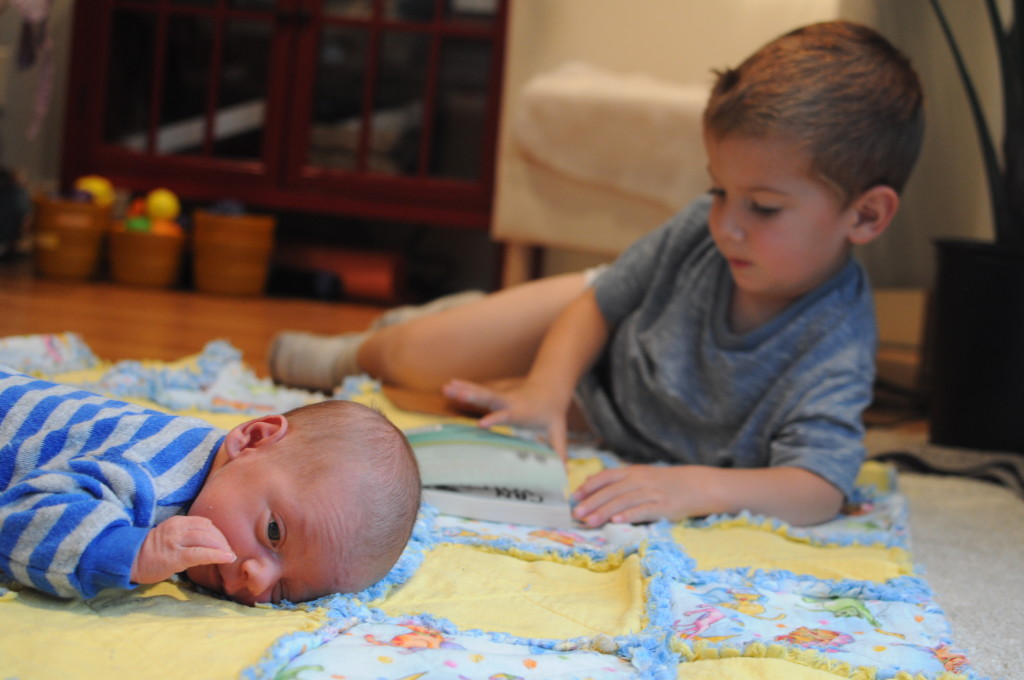 Moments when Samuel dotes over his brother melts my heart. This moment brought tears to my eyes. You can read more about Samuel taking Timothy through the catechism and family devotions here.