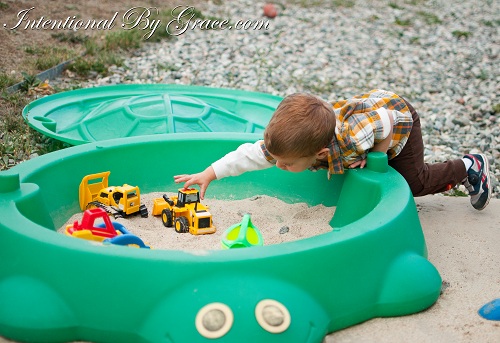 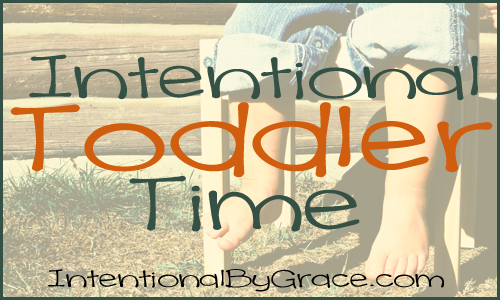 After almost an entire month of traveling, mostly by airplane, we are so glad to be back home and back to Intentional Toddler Time.

We are in the throws of fall in Steamboat Springs, and the temperature is dropping into the 30s at night. I’m well aware that our first snow season is quickly approaching (remember when I said I liked my flip flops?); therefore, we are spending far less time indoors and far more time out of doors these days. Samuel loves being outside. I think he’d sleep outside if we’d let him! 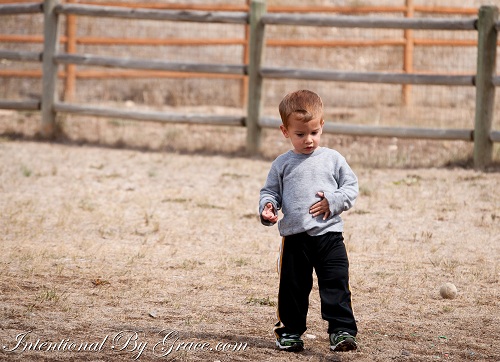 I give him lots of time to play outside by himself. He has free reign of our fenced in back yard. Sometimes I sit outside with him, other times I wash the dishes and tidy downstairs. I love the way our home is set up. I can see him from just about anywhere downstairs I go. So I set him outside, give him a pat, and he takes off. 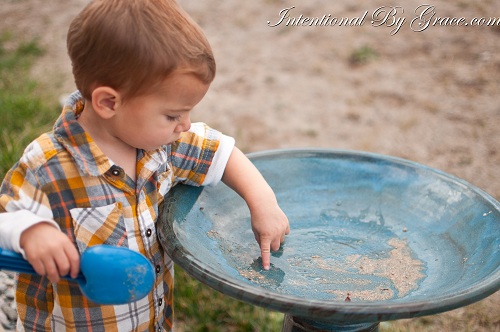 Almost every waking minute my boy was outside! When he’s outside, there aren’t a lot of rules. He can run, jump, bounce like a kangaroo, and just let it all hang out! Sometimes he’s even diaper-less, and often he’s pants-less. He can explore the furthest corner of the yard, and have the freedom to get stung by a bee. No, I’m not putting him in harm’s way, and no I don’t intentionally put him in front of a bee. My point is that I’m raising a little boy who needs the time to just romp, and when he’s outside, he doesn’t have to play by the rules that he has inside. 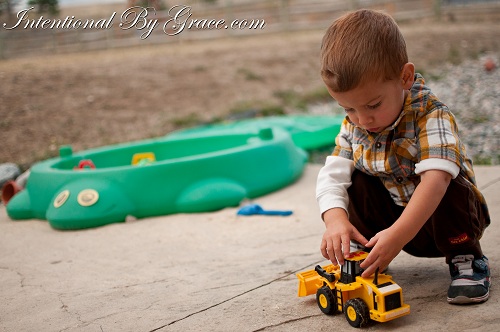 He’s really getting into trucks and cars and fish. Speaking of fish, I created his first ever sensory bin. I recently came across Simple Living Mama’s Apple Themed Sensory Tub. I remembered her telling me she doesn’t do a lot of tot trays because sensory bins work better for them. So I thought I’d give sensory bins a try, fully expecting Samuel to hate them. Boy was I wrong! 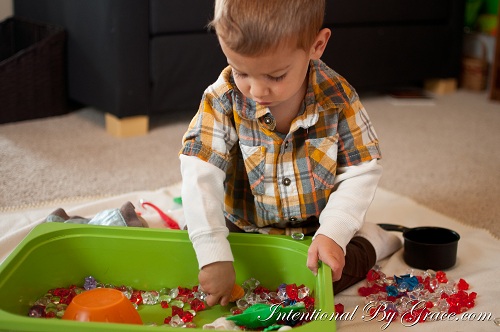 , and every day before breakfast, after nap, and after dinner, I hear the words, “Mama, sense-y. Mama, sense-y.” If you don’t do toddler talk, that’s sensory bin. 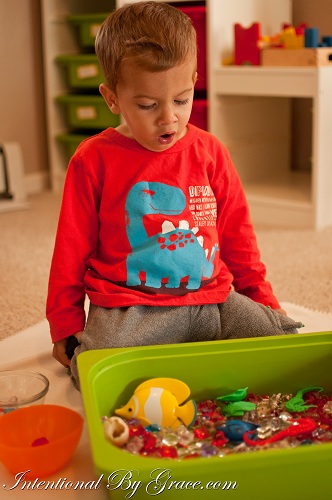 Fresh from a nap and ready to dig in! Really? This kid has been missing out because his mama totally got it wrong! We’ll be incorporating more sensory bins into our weekly routine.

What I learned this week is that Intentional Toddler Time never looks the same from week-to-week. I plan activities, but it’s not so I can make sure we get it all done. I plan activities for moments when Samuel needs some help deciding what to do, or when he needs Mommy’s attention more so than usual. But overall, we have a plan, and we call it Intentional Toddler Time because I’m intentionally observing my child at play, interacting when necessary and appropriate, but giving him lots of freedom to explore.  Some week’s he asks to sit at the table and write, which comes out “lap, lap” and points with his crayon at the table. But weeks like last week, I had lots of fish crafts and activities to do with him; however, he didn’t need them. And I didn’t interrupt his natural learning either.

There is a balance, I think, with this whole Intentional Toddler Time. I don’t want you to think that I make sure to cover everything every week. He’s a toddler for crying out loud. I get that. You know that. I think a lot of people think I have him sitting at the table for hours on end adding and multiplying the common derivative of four minus two square. I don’t. I promise. But I do seek to intentionally pursue my child, and bring him alongside me in work and play. I give him open ended toys to play with and we play classical music some days. But most days, we’re dancing like crazy kids to VeggieTales.

So one week you might see me working with him at the table holding a pencil, the next week there might be perfectly organized tot trays, and other weeks you might see me curled up on the couch exhausted while my boy watches Finding Nemo for the fifth time today. Or week’s like this week when I’m inside catching up on life while my boy romps outside and completely entertains himself. I have no idea what he learned, but I can tell you this much … he can laugh like it’s nobody’s business when he plays with his big, giant dog in his big back yard.

Do you ever find yourself comparing yourself to other moms of toddlers?