My baby crossed over into toddlerville a couple of weeks ago. I honestly can’t believe it! Wasn’t he just born yesterday?

His first year of life has flown by!

Unlike his brother who didn’t start walking until well after his first birthday, Timothy (we call him Timmy) started walking by 10 months old. Now, it’s his favorite mode of transportation – though he’s still not completely steady.

Timmy is moving into such a fun stage of life! I love this age. It’s so much fun, and I plan to soak it all in. I’m determined his second year won’t go as fast as his first year. Well, at least his second year I’m going to document a little better. 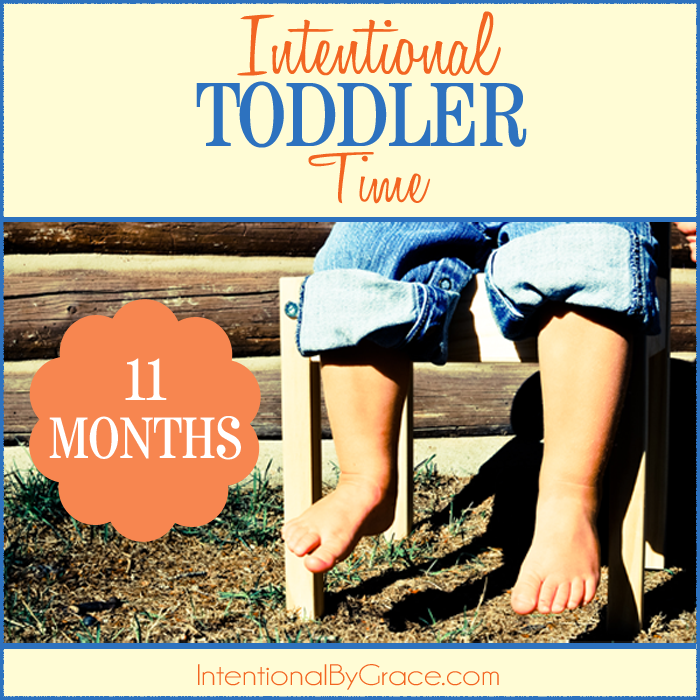 I am so excited to be writing these type of posts again. You can see all of Sam’s Intentional Toddler Time posts here.

Now, it’s Timmy’s turn, and I really am beside myself with excitement! Call me a dork, but I don’t care. I love this age!

Each Thursday I’ll be sharing what Timmy’s been up to. I hope you enjoy his journey with me! 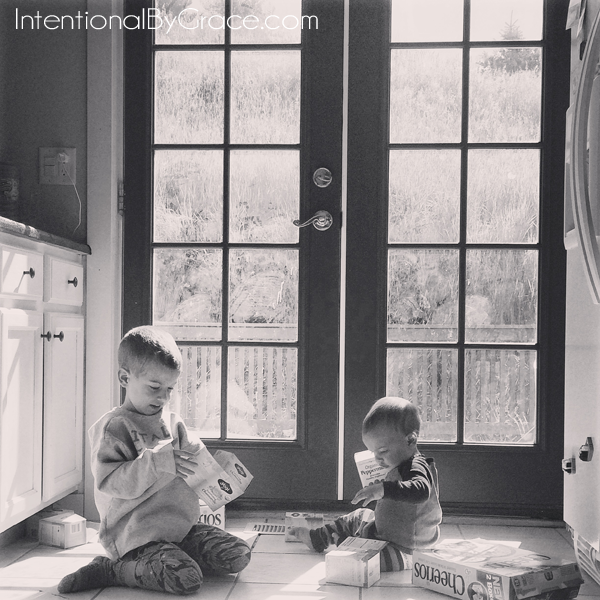 Timmy loves empty boxes. He loves opening and closing them, scooting them around the kitchen floor, and banging them around. He loves it even more when his brother joins him.

On this day, the boxes were cars and they “vroomed” them around the floor while I cleaned up breakfast. 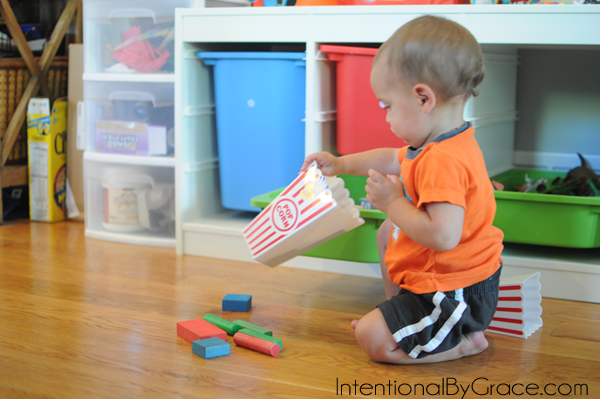 He loves filling various containers with objects that clink and … well, BANG! 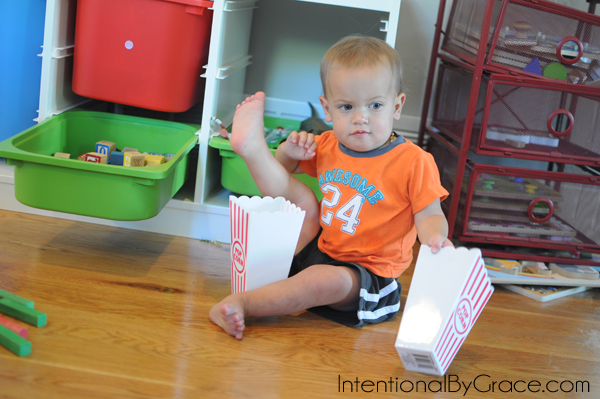 He’s determined as all get out to NOT move the container. He CAN get his leg up and over it. He KNOWS he can. This picture cracks me up so much. 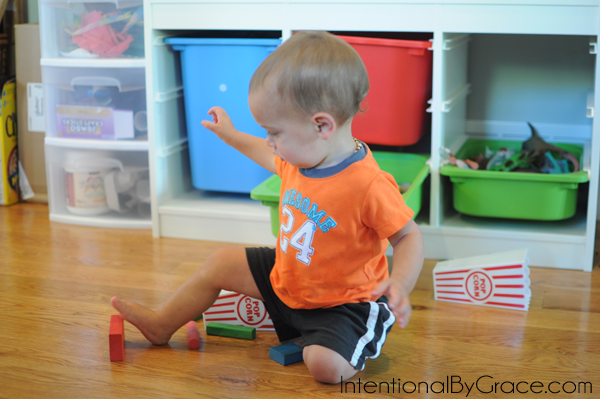 Kicking blocks is far easier than lifting one’s leg over a tall container. He kicked this block around for a while before tiring of it. 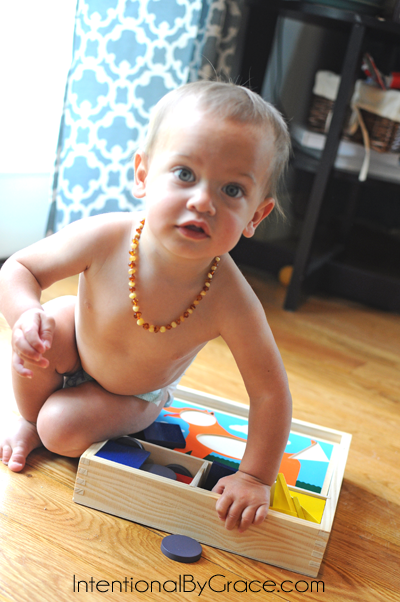 I pulled out our Melissa & Doug Pattern Blocks for him to play with one day.

Then, I gave him a few different kinds of bowls and tins to put the wooden shapes into.

After he sorted for a bit, he took the lid off and on over and over again. 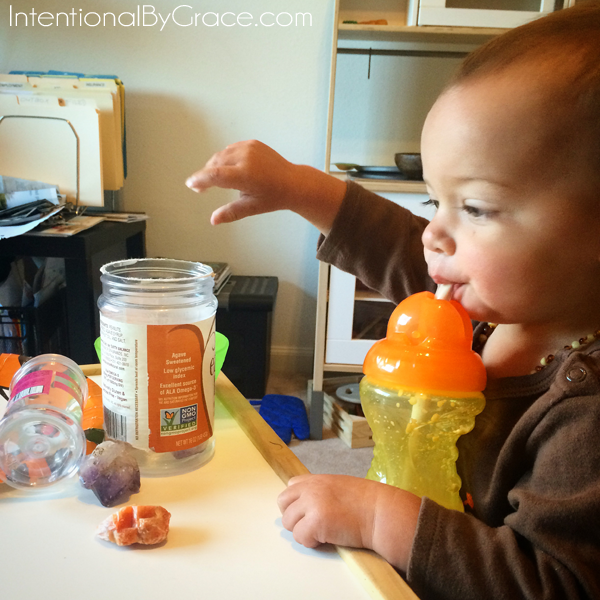 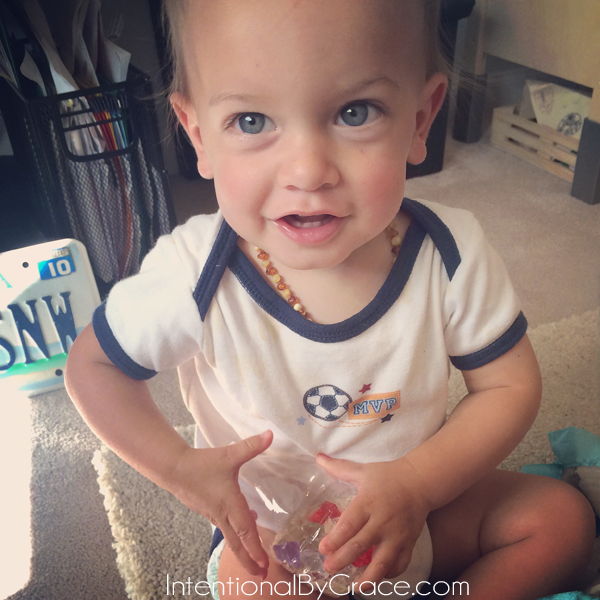 Bubba had a rice bin and Timmy was jealous. So I put him together a sensory bottle of rice and jewels. This was A LOT OF FUN! He loved shaking it and hearing the sounds and rolling the bottle around to see the different jewels. But most of all, he loved that his brother couldn’t have it. 😉 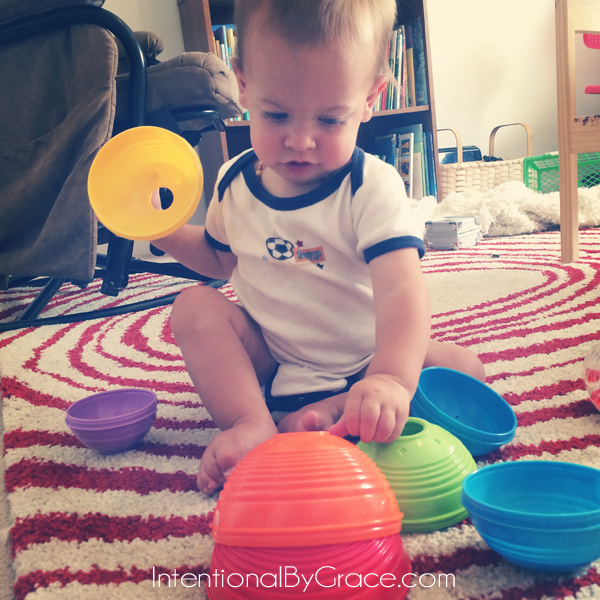 These stack and roll cups are a HUGE hit with both the boys, but especially Timmy right now. He plays with these multiple times a day! He loves trying to stack them as well as figuring out what objects will fit through the holes in the top. 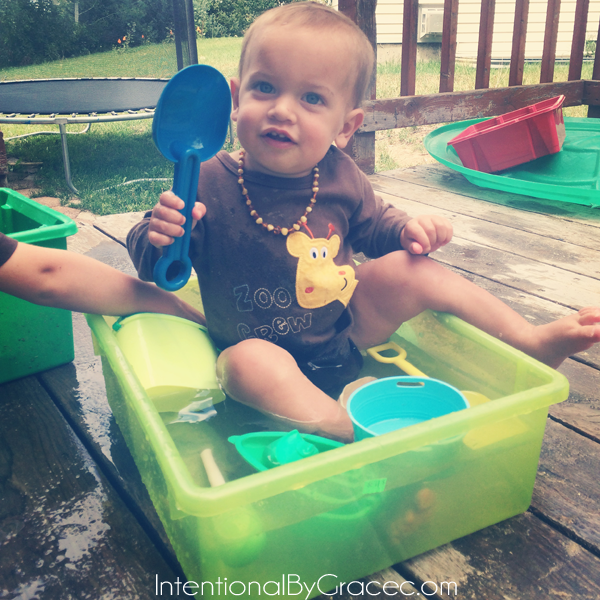 This boy knows where the fun is at! I set the boys up on the deck with a couple of water bins, but Timmy wasn’t satisfied just playing outside the bin. He worked hard and figured out how to get IN the bin. He was in heaven!

Samuel looked at me like, “Isn’t this against the rules, Mom?” To which I would have said, “No. It’s not, son. You just would have never considered doing this so rules against such behavior were never mentioned.” I love how different both boys are!

And that was Intentional Toddler Time this week!

What are some thing you do with your toddler?