I haven’t written in my journal or opened my Bible in a while. I don’t mean like a day or two or three. I mean a while. Nearly a month. I’m not sure I’ve ever gone so long without opening my Bible or penning a single word in my journal. 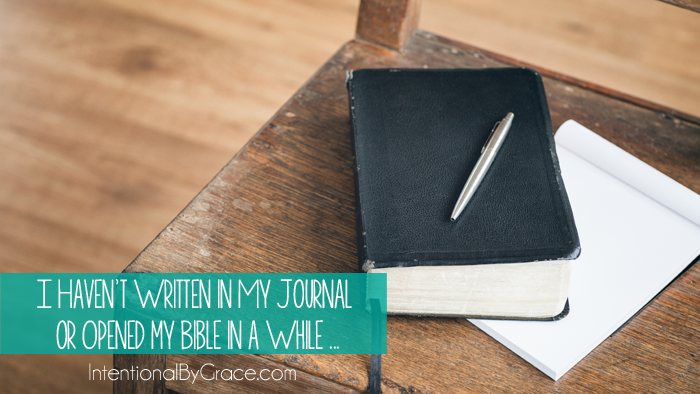 Most mornings my day begins with a temper tantrum. Sometimes my own, but mostly by my two year old. Other days when we get a morning pass from the toddler fits, I’m exhausted, worn down from growing a baby inside me. And even worse, the other days I fritter away on Facebook or Candy Crush. It sounds awful. I know. Irresponsible even to waste time on worthless things. I would have judged the latter answer something harsh a year ago, or maybe even a few months ago.

But my mind. It’s so overwhelmed with crisis parenting right now. Children that only want mommy. Loud cries and vehement revolts against Daddy’s help. My brain hits crisis and I can’t seem to recover. Not today. Or tomorrow either.

I’m living in a fog right now. I haven’t written because it feels pointless to even pick up a pen. I’ve opened my journal no less than ten times in the last few weeks. I pick up the pen only to put it down to answer a cry or pour another glass of milk. I’ve peered at my Bible sprawled on my chair with longing eyes (and then angry eyes) more times than I can count. I want to read and study, but I don’t have it in me. I don’t have the brain cells to string together a thought or understand a word on the pages of Matthew or Isaiah.

It’s not about not making time to commune. I know I could get five minutes here or there. That’s the simple answer. The band aid that I’ve used for so long.

It doesn’t matter what you do, mom of little ones, just take five minutes. (Cue gagging sound stifled by an enormous yawn.)

Waking up early isn’t an option (did you hear the yawn?) and room time for the boys no longer works. It’s completely and fully about being spent. It’s about exhaustion and needs. It’s about knowing the Spirit of Christ is the only way you get through a day. It’s about seeing your sin, the disgusting nature of self on display and so desperately wishing Christ would just return.

To be clear, I’m not even reading books. I read one this month. Slowly. Savoring I called it, but really I just couldn’t think. I couldn’t concentrate. I just wanted to sleep.

And don’t say it. No platitude or pep talk will work. No “this too shall pass” will suffice right now. I’ve tried them all. I’ve used it on myself and other moms to no avail. The gospel is not heard in empty words and borrowed phrases.

But I know the gospel is here. I feel it deep in my bones.

I want to keep giving, but I don’t even know what to give or where the giving comes from. My soul thirsts for Jesus, for fellowship with the One who created me, but these little people – they require so much. So much!

I know my children will grow up, yet this isn’t about them. This isn’t about how I will feel one day about my earthly rewards when they have flown the coop or simply sleep in their own beds or cease to take nourishment from my body.

Jesus Christ. The lamb of God.

And then today it hit me. It hit me like a ton of bricks.

And when the hour came, he reclined at table, and the apostles with him. And he said to them, “I have earnestly desired to eat this Passover with you before I suffer. For I tell you I will not eat it until it is fulfilled in the kingdom of God.” And he took bread, and when he had given thanks, he broke it and gave it to them, saying, “This is my body, which is given for you. Do this in remembrance of me.” And likewise the cup after they had eaten, saying, “This cup that is poured out for you is the new covenant in my blood.” ~Luke 22:15, 19-20

Bread and wine. Both symbolic in their meaning and tangible in the ability to be obtained. Consumed. And given to us to take in remembrance of Him.

The gospel for me. For you.

A body broken for me.

Blood poured out for me.

Nothing I do will ever compare, never need compare to the sacrifice He made willingly once and for all.

It is finished. Paid for in full.

The gospel is here in its simplicity. In the bread and the wine. The one thing I can manage to do right now – “do this in remembrance of me.”

I thirst and I hunger. And He has given the bread and the wine. This. Just this.

Reading my Bible, completing a thought, or praying a prayer of more sophistication might come again some day. But it truly doesn’t matter one way or another because this is enough. He is enough.

Son of God with us.

The bread and the wine given to us, for us.

“Do this in remembrance of me.”

Crate Expectations: All You Need to Create & Celebrate Every Season– in ONE Box!
Next Post: My Favorite Books from 2015