What a fun week we had learning about gentleness, the letter T, Abraham, camping and tents, The United States of America, and best of all Chicago.

It was a full week of home preschool and very little of it was planned time. Much of what we did this week was child-led and it was a whole lot of fun!

I always like to make a plan with a general theme to work on throughout the week, but I rarely do exactly what I have planned. I often follow my son’s lead and just enjoy playing with him. My plan helps me to be prepared to take advantage of teachable moments as you’ll see throughout this week.

For Bible time and character training, we use the Fruit of the Spirit Curriculum.

We read Psalm 23 each day and practiced our memory verse. We talked about the gentleness of God and what gentleness means. 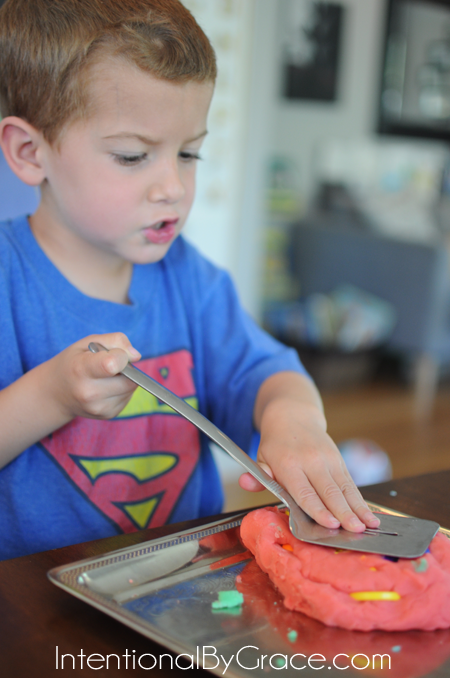 I let Sam free play a bit with the playdough, and then we did an object lesson on gentleness. 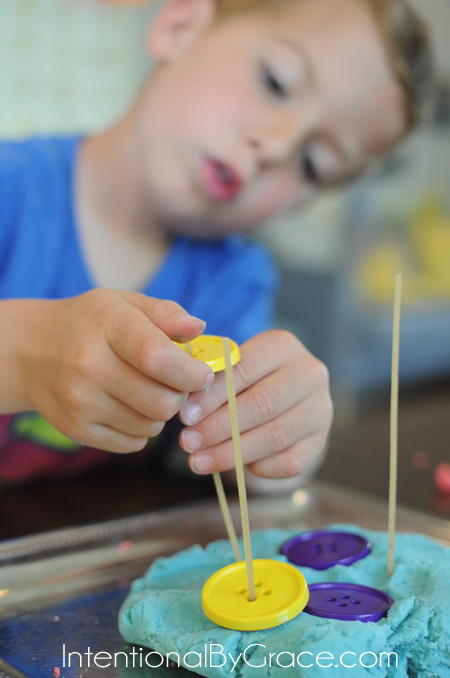 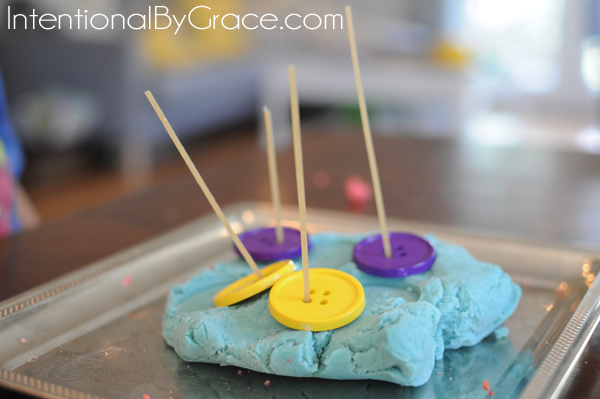 I let him stick the noodles into the playdough without any direction. The first time he tried, it broke in two. He was frustrated. I told him to try again, but to be gentle. He was able to get four pieces in without breaking them the next time. We talked about gentleness some more and what it means. Then, I handed him some large buttons to put on the noodles for some fine motor practice and another lesson in being gentle and soft.

We use God’s Little Explorers Preschool Curriculum for our base guide to lead us through the alphabet and additional preschool theme work. This week we talked about the letter T, Abraham, and camping theme. However, I didn’t get many pictures of us doing our theme work. We used our letter sensory bin to practice the letter T throughout the week. Sam continues to really enjoy these, and each week he becomes more and more imaginative with them. 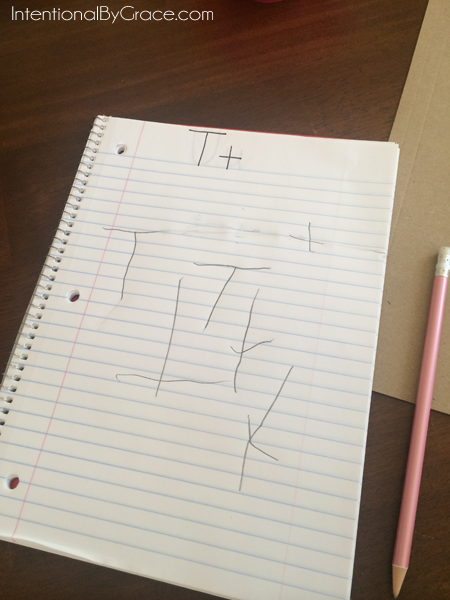 We practiced writing the letter T in our alphabet notebook. 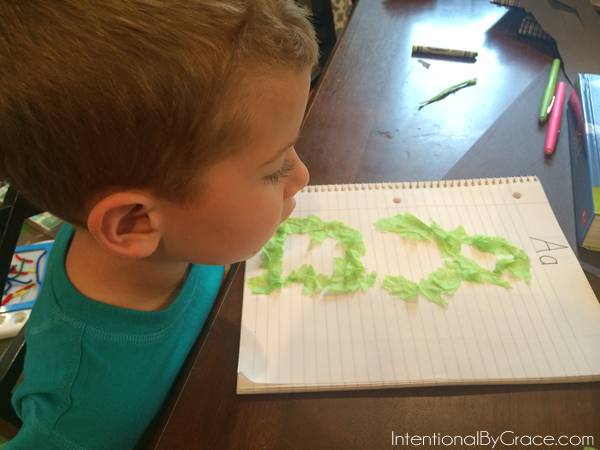 And we made up some letter A work from last week in our alphabet notebook. He requested the tissue paper to make his letter A, which I thought was creative. He loves making letters with different materials.

We use All About Pre-Reading for our phonics work, as well as to enforce and teach our letter of the week in more detail. 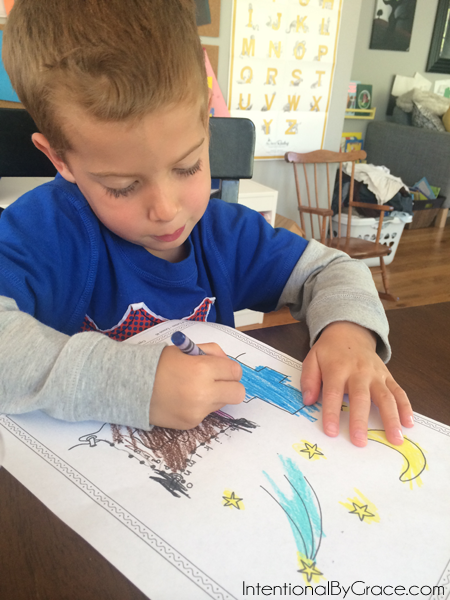 I was excited that the lowercase letter t work was a tent. It lined up perfectly with our theme for the week. 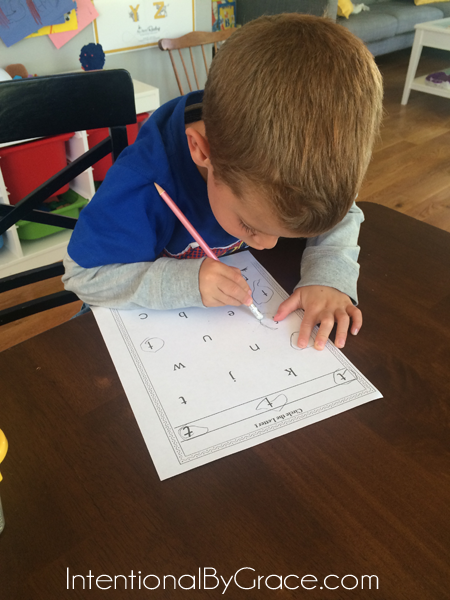 He also continues to enjoy these little worksheets. He circled the wrong one and learned the art of erasing. It’s the little things. He was so excited!

Other fun preschool things we did … 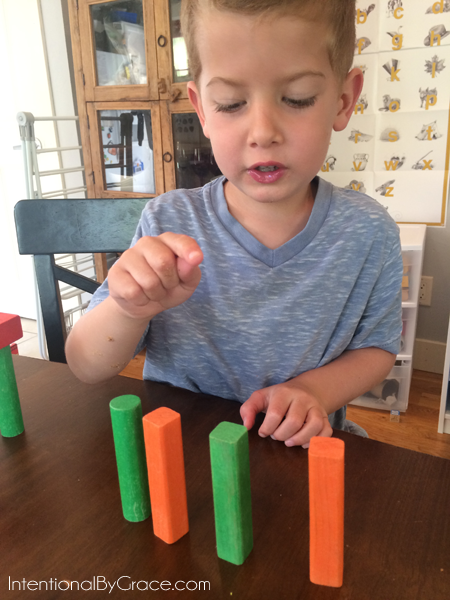 He requested we play with our wooden blocks for school time one day. I obliged, and we worked on patterns: green, orange, green, orange … what comes next? 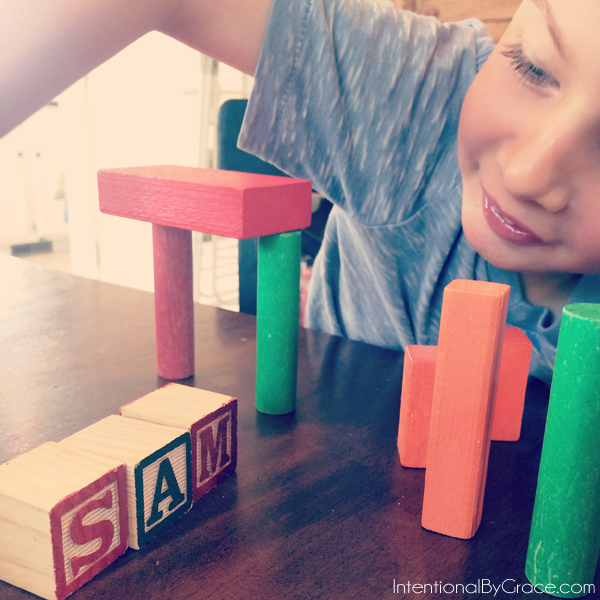 While he built a tower, I spelled his name with the blocks. He said, “That’s my name! Sam!” I had no idea he could recognize his name spelled yet. 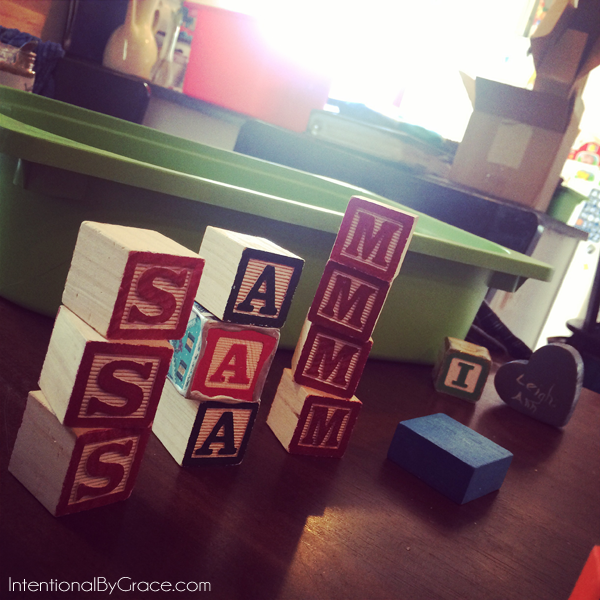 So then we practiced spelling his name with the blocks by stacking them on top of one another. 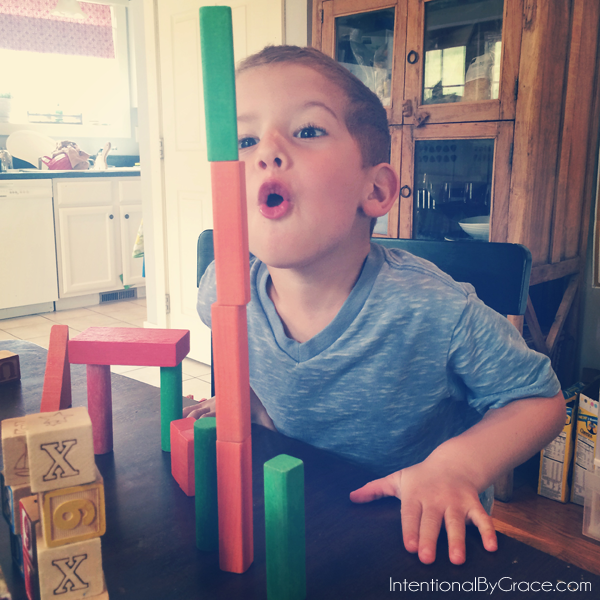 He also impressed me with his block stacking skills. Then, he promptly blew the tower over because that’s so much more fun than building towers! We then created a road for our cars, and I worked with him on color matching. While he had the roads up, I told him to pull out the taxi cab, which made me think of our upcoming road trip. We’re going to visit Chicago, IL. I started explaining to him about the tall buildings, the roads, the traffic, the construction … the BIG CITY! He got so excited. We built ourselves a little replica of what we think Chicago will look like. He played “Chicago” nearly every day for a week before he finally moved on to something else. He talks about going to Chicago all the time now. He’s very excited about seeing the tall buildings and the taxis.

This was SUCH A FUN learning time. To him we were just playing, but I knew better. I knew we were learning so much together. During snack time one day, he arranged his raisins into a letter a. We continued to play with our food to make various other letters including our letter T for the week. 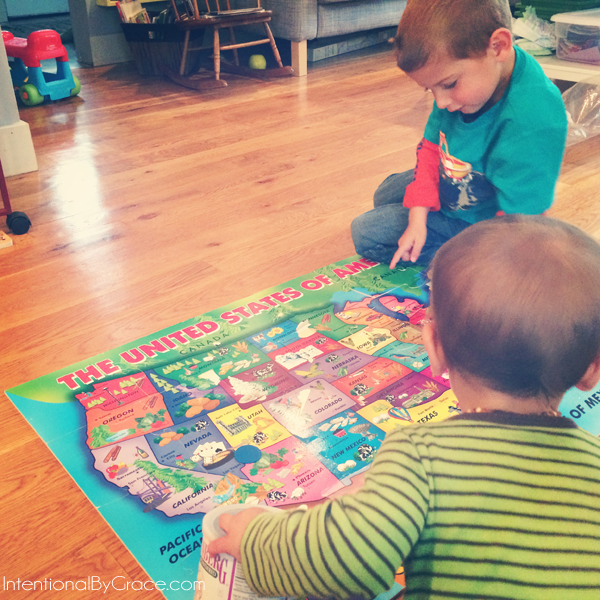 We put together our floor puzzle of The United States of America one day so we could find Chicago on the map. We also reviewed the states we’ll be visiting and talked more about all the things we will be doing. Little Brother even got in on the action a little. We are using The Way They See It for art study. He loved looking at this picture and picking out the various shapes I called out. 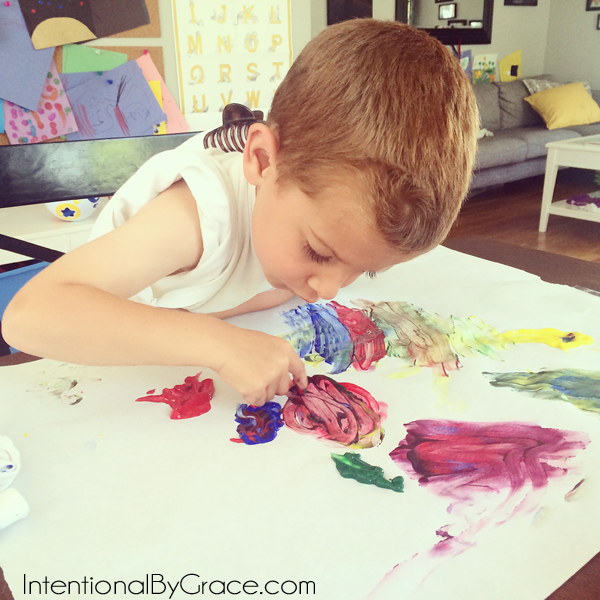 Then I set him up with his own finger paints on freezer paper (got the suggestion for freezer paper from The Way They See It). I let him free paint whatever he wanted. 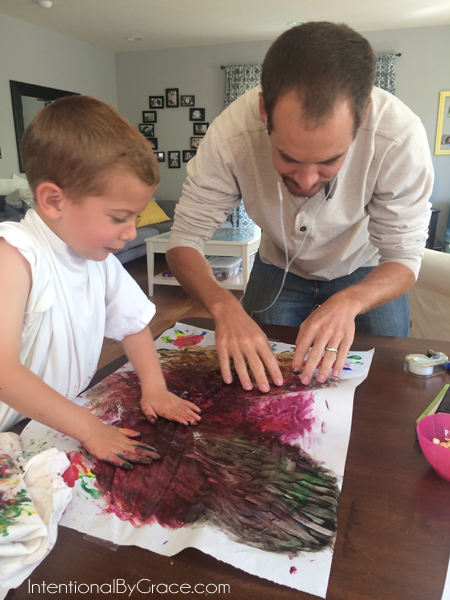 After he had been mixing for a while, Daddy came downstairs to “prove a point.” I always let Mark know when we’re doing messy play so he can join us if he wants. He and I both know, he will never join us. He HATES messy play. Not one to get his hands dirty in finger paint or even know that glitter is being used. 🙂 It’s a little joke we share in jest and love.

However, he came down on this day to get his hands dirty, and his little boy could not have been more pleased. Sometimes you just have to get outside your comfort zone! The perks of working from home. Once we had a nice mess, I realized why the freezer paper was so fun. It allows you to slide the paints around more than regular craft paper. So then we were able to practice writing his name in the fun mess! We also practiced various shapes and our letter of the week.

And that was our week in home preschool!

31 Days of Living the Gospel At Home
Next Post: Choosing to Take Life By the Horns and Really Live