As a self-proclaimed Type-A planner, I am passionate about my lists. I like accomplishing things because then I can cross those things off my list! I like having a plan, and I love sticking to my plan! Unfortunately, my beautiful plans are often interrupted by circumstances beyond my control. In fact, my whole life was interrupted with a single word…cancer.

Before my diagnosis I had big plans. My youngest was starting Kindergarten, and I would finally have time to myself to do things I wanted to do: I could find time for a regular work-out routine or volunteer at church or my kids’ school. I might even get around to cleaning out that basement closet I’d avoided for the last three years!

One thing I had not planned for was cancer, but that’s exactly what happened. It not only inserted itself on my to-do list, it consumed my time, emotions, and mental energy, leaving little time for anything else.

Didn’t God know what I had planned?! Hadn’t He seen the lists?! I was pretty sure I had run them by Him. Volunteer…at church. Offer my time and talents…to my kids’ school. These were good things!

One afternoon, in the midst of my pity party, a friend sent me a text with this verse: 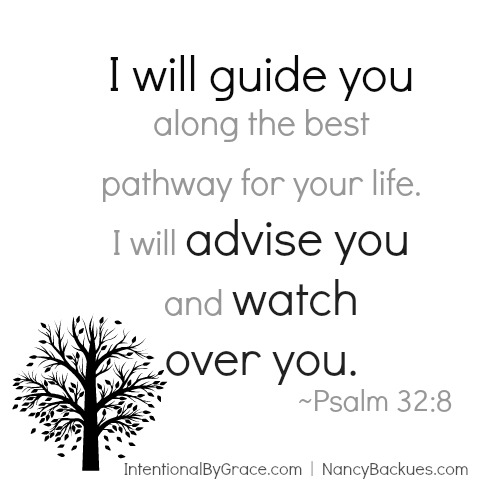 It was not your typical “I’m praying for you, you’re gonna make it” verse I had received from so many others. You know, verses saying “Do not fear…” “I am with You…” “Nothing is impossible with God…” Those verses left me feeling encouraged, uplifted, warm and fuzzy. But…I will guide you along the best path for your life?!

How could cancer possibly be the best path for my life?

I began to wonder, Could it be that God had another plan…one that was less about me and my agenda and more about Him and His plan?

As I began to look at stories of healing in the Bible, I came across the story of Lazarus. Of course, I had read it countless times, but this time I wasn’t focused on Lazarus. This time I could relate to someone else in the story–Martha.

I have a feeling Martha loved her lists, too, because when Jesus came to her house, she busied herself doing things (Luke 10:38-42). A woman after my own heart!

Martha’s life was suddenly interrupted when her brother, Lazarus, became very sick (John 11:1). Like any good Type-A multi-tasker, she immediately sent word to Jesus. I’m sure Martha thought she was simply being efficient. Jesus was not only a close family friend, He happened to also be the Messiah. Two birds, one stone: inform Jesus of Lazarus’s illness, solicit healing from the Healer himself. Check and check.

When Jesus received the message, he kept right on doing what he was doing…for another two days. I can only imagine the frenzy this sent Martha into. She probably passed the time by puttering around the house, tending to Lazarus, snapping at her poor sister, Mary, and all the while muttering under her breath about what could possibly be taking Jesus so long!

Then Lazarus died. That was not what Martha had planned, I’m sure. She had done everything right by sending for Jesus. I’m sure she assumed Jesus would rush right over and make Lazarus well again. But He didn’t.

When Jesus finally came, Lazarus had been dead for four days! Always on top of things, Martha met Jesus outside of town and gave Him a piece of her mind:

Martha said to Jesus, “Lord, if you had been here, my brother would not have died. But even now I know that whatever you ask from God, God will give you.” (John 11:21, 22)

If I were Martha, this is what that would have meant: “Lord, it’s about time You got here. Let’s not waste any more time. Lazarus is dead. Just say the word and You can be on your way. Then we can get on with our lives.”

What Martha did not realize was Jesus already had a plan. When He had received word of Lazarus’s sickness, He already knew the outcome:

This illness does not lead to death. It is for the glory of God, so that the Son of God may be glorified through it. (John 11:4)

Nowhere, on any of Martha’s lists, did it read “Lazarus dies to glorify God.” If it had been up to Martha, it would have gone something like this: Lazarus gets sick, send word to Jesus, Jesus speaks healing, Lazarus recovers. Check, check, check, and check. Done.

God had a different plan. He didn’t worry. He didn’t fret. He didn’t need to rush or hurry. It was His plan, and it was unshakable.

He went to the tomb and called out to Lazarus. The corpse of a man who had been dead for four days drew breath again. Lazarus stood up and walked out of the tomb! This happened in front of hundreds of people: friends, family members, and professional mourners. 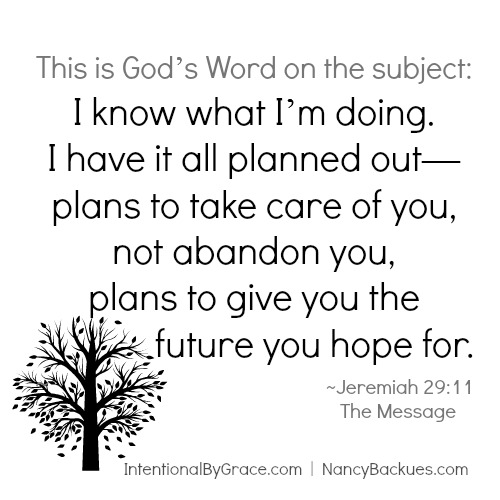 God is eternal, which means He exists beyond the confines of time. He sees all of time at the same time. He sees the end as well as the beginning. That’s how Jesus could calmly, and confidently say, “This sickness will not end in death” when He received word about Lazarus.

However, knowing the plan does not mean God is unfeeling or uncompassionate to your circumstances. Jesus knew Lazarus would be raised from the dead, but that did not keep Him from feeling the emotion of the situation and weeping for his friends (John 11:35).

God sees your situation. No matter how shocking it was to you, it did not catch Him off guard. He is not worried about it. Nor is He uncompassionate toward it.

It may feel like your circumstances are beyond your control; there may be a lot of things about your situation you can’t control. But one thing you can control is your response to it.

I had not planned on cancer, but I found myself facing it. At that point, I had a choice: Would I would allow God to use it for good? Or would I wallow in self-pity and grow bitter over the fact that He allowed it at all?

If I believe that God is good, He loves me, and He is in control, then it makes sense for me to hand over my agenda and let God write His story. I have a feeling His will be much better than mine would have been anyway!

Adapted from Unshakable: Finding Faith to Weather the Storm by Nancy Backues.

Nancy is an author, speaker, wife, mother, and two-time cancer overcomer. She lives in Missouri where she relies on God’s grace and good coffee to live out authentic faith in the midst of a mostly messy life. She blogs about faith, family, and finding grace at ThereIsGrace.com. You can read the rest of her story in Unshakable: Finding Faith to Weather the Storm and connect with her on social media.