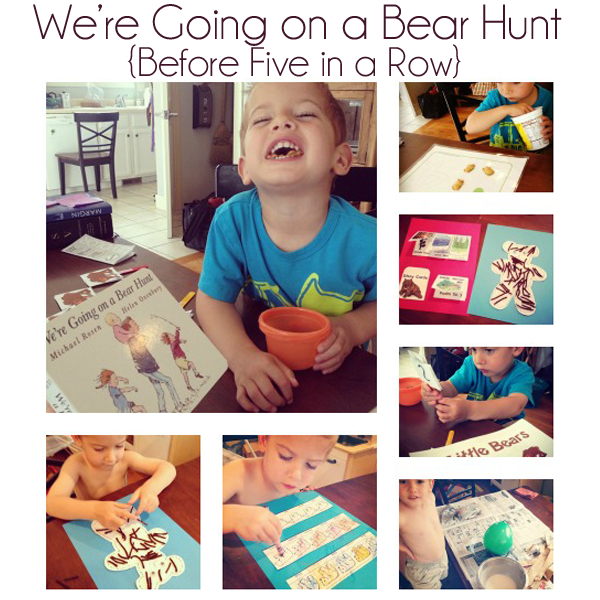 When I was pregnant with our second little boy, I worked ahead in the final weeks of pregnancy preparing our Before Five in a Row Units to row with my oldest after our new son was born. I chose the Before Five in a Row curriculum because it’s enough to simply read the stories everyday. However, my toddler loves to do enrichment activities to go along with the books, and I love spending intentional time with him doing learning activities while playing a lot! We’re Going on a Bear Hunt was one of the units I had planned out, so we picked it up to row this week.

Day 1 with We’re Going on a Bear Hunt

Before reading our story, we took a walk around the neighborhood. Our goal was to spot as much of nature as we could. I had intended to take along our Nature Scavenger Hunt printable, but decided to just keep it open ended. We watched a hot air balloon float over the mountains, stomped in mud puddles, observed worms on the pavement after two days of rain, and enjoyed looking at a dew covered spider web (Sam’s first real live spider web spotting). 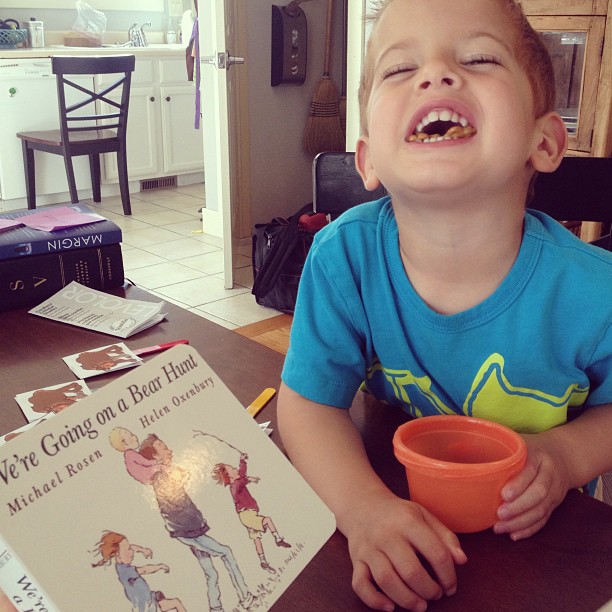 During snack time, we did our school time. We started with reading our book, We’re Going on a Bear Hunt. We then continued to read it two more times since Samuel kept asking for “one more time.” I think he likes this story! 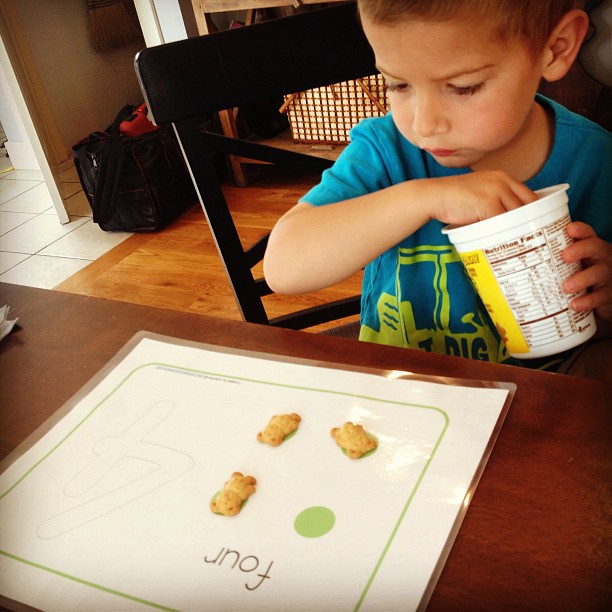 I had Teddy Grahams on hand because the person who brought our family a meal wanted to give Sam a treat! It was such a blessing because I hadn’t made it to the store to get them yet. We used the Teddy Grahams with our number play dough mats from Homeschool Creations to work on counting and number recognition. We did numbers 1-5 and worked on patience and self control. He wanted to eat them instead of work with them on his mats. But with a little coaxing we completed the activity and he got to enjoy his snack. 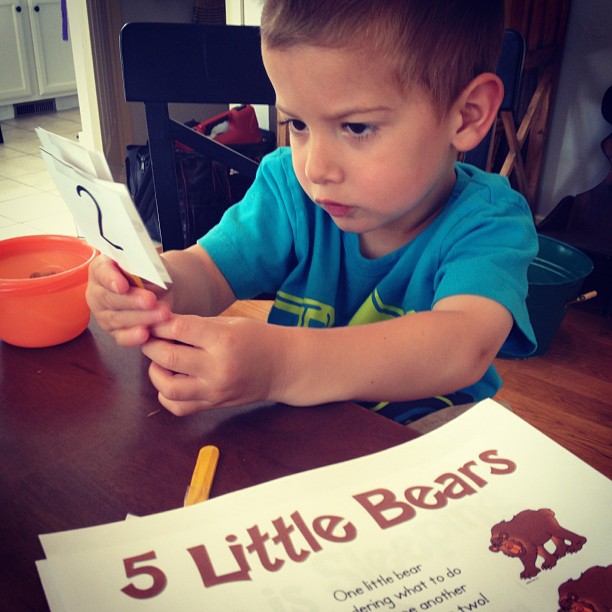 Afterward we sang 5 Little Bears while using our popsicle stick props. He loves singing so this was another fun activity for him. I got our 5 Little Bears song printable and props from 1+1+1=1.

Day 2 with We’re Going on a Bear Hunt 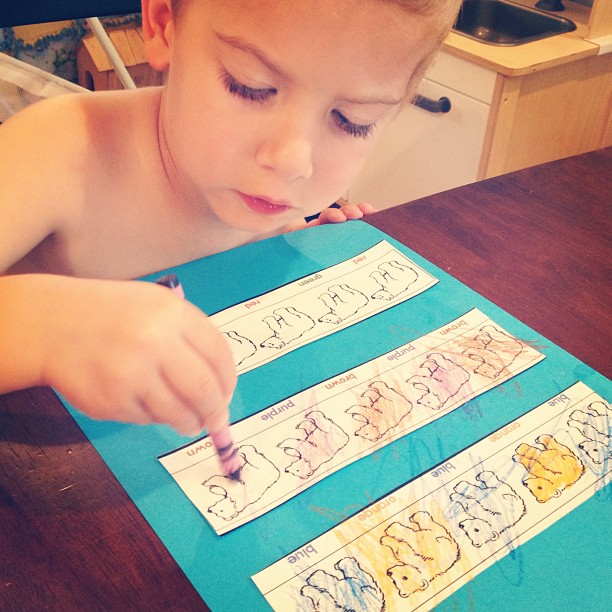 After reading We’re Going on a Bear Hunt (twice), we colored bears to work on patterns. 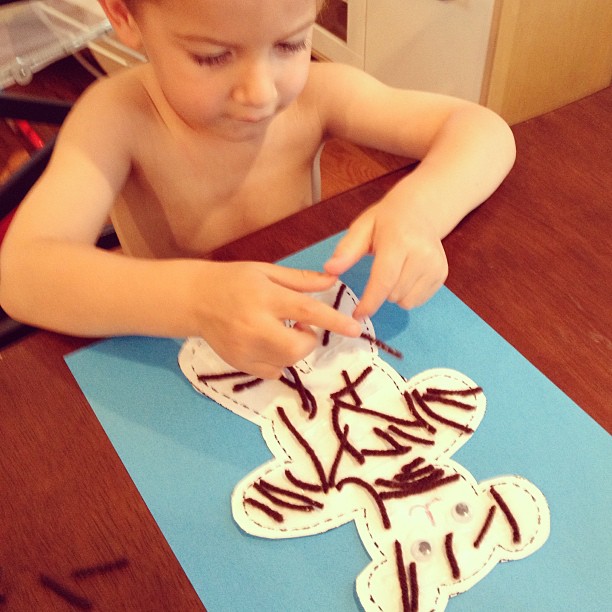 Then we did an easy bear craft using brown yarn, googly eyes, and a pink crayon to draw on a mouth. Doesn’t get much more easy! He wasn’t a huge fan of this craft once he got a little glue on his fingers. Sticky fingers just aren’t his thing. I had to finish it for him. 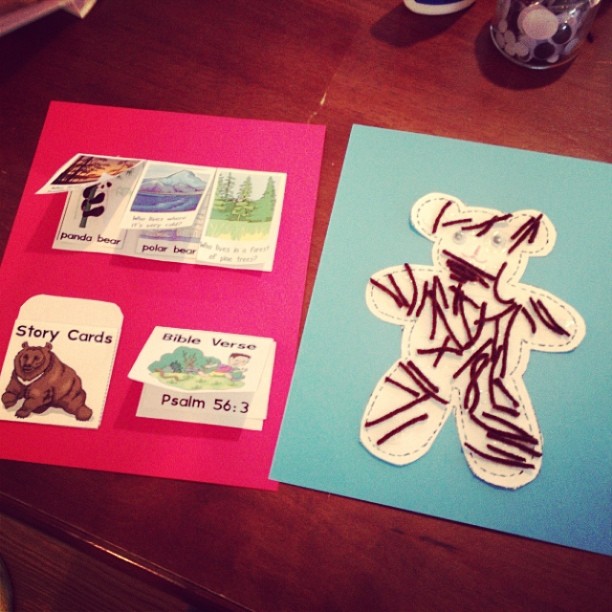 Then we did a few more lapbook activities for as long as he was interested. 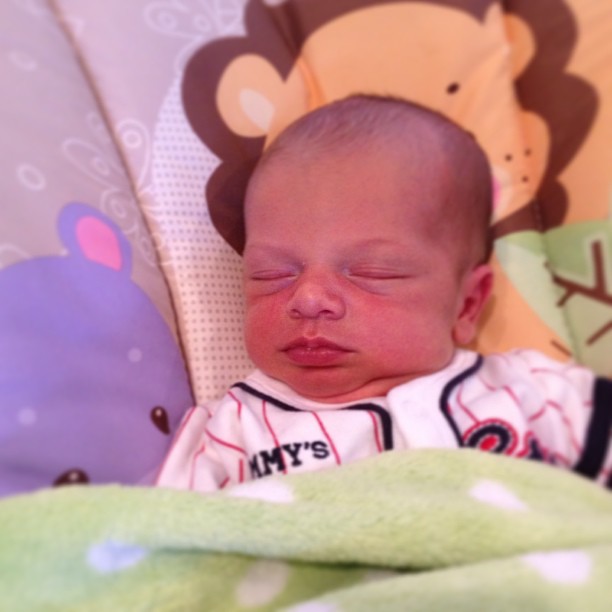 While we worked, Timothy snoozed away. I’m taking advantage of the newborn sleeping schedule to spend lots of time with Sam. I’m sure little bit will wake up soon enough. 🙂

Day 3 with We’re Going on a Bear Hunt 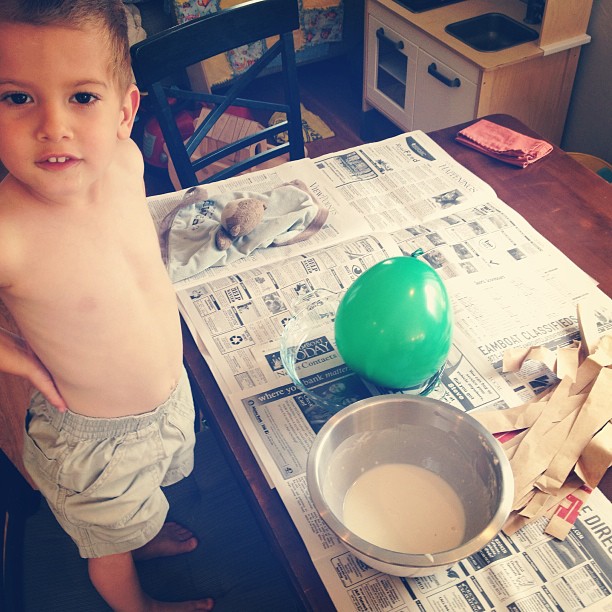 After reading our story, I decided to be brave and make a little paper mache bear cave. I wasn’t sure how my toddler would like it since he doesn’t like to get his hands dirty, but he loved it! It was a great sensory activity for him and we actually had a lot of fun. I followed these instructions.

Don’t forget to check out our other Before Five in a Row posts here.

Why We Chose a Doula
Next Post: Timothy’s Home Birth Story