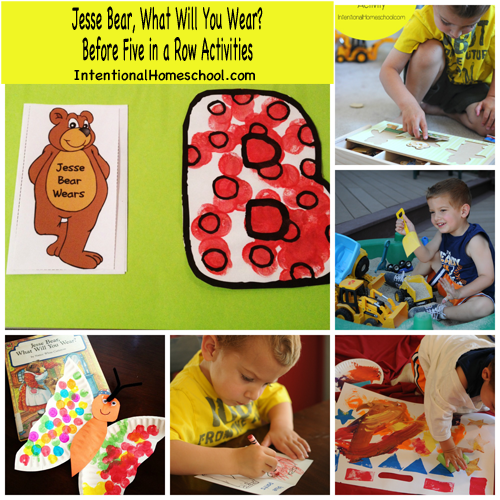 This week we decided to row Jesse Bear, What Will You Wear? (You can see all of our rowing adventures with Before Five in a Row Curriculum here.) It quickly became a favorite read aloud. I checked it out from the library, but I plan on purchasing this cute story to add to our collection. Samuel absolutely loved it! He’d wake up asking to read Jesse Bear, What Will You Wear? 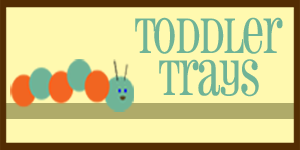 Toddler trays were a big hit this week. He found them all on his own and played with them every single day. 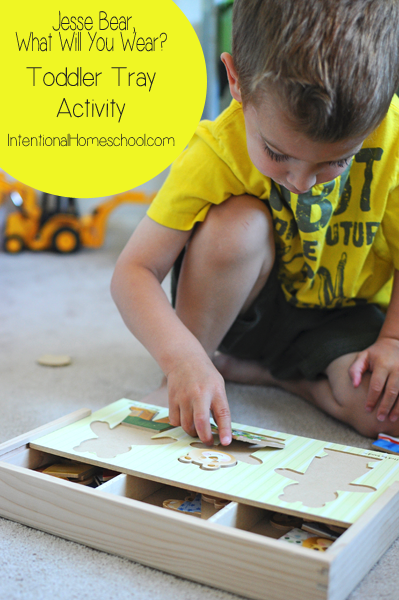 Our Melissa & Doug Wooden Bear Family Dress Up Puzzle was an enormous hit! I found this little set super cheap on Zulilly a few weeks ago and it came in just in time for this weeks rowing adventures!

By the way, Zulilly often has great learning tools for toddlers and preschoolers, and often much cheaper than I can get them on Amazon. I’m so in love with Zulilly right now! 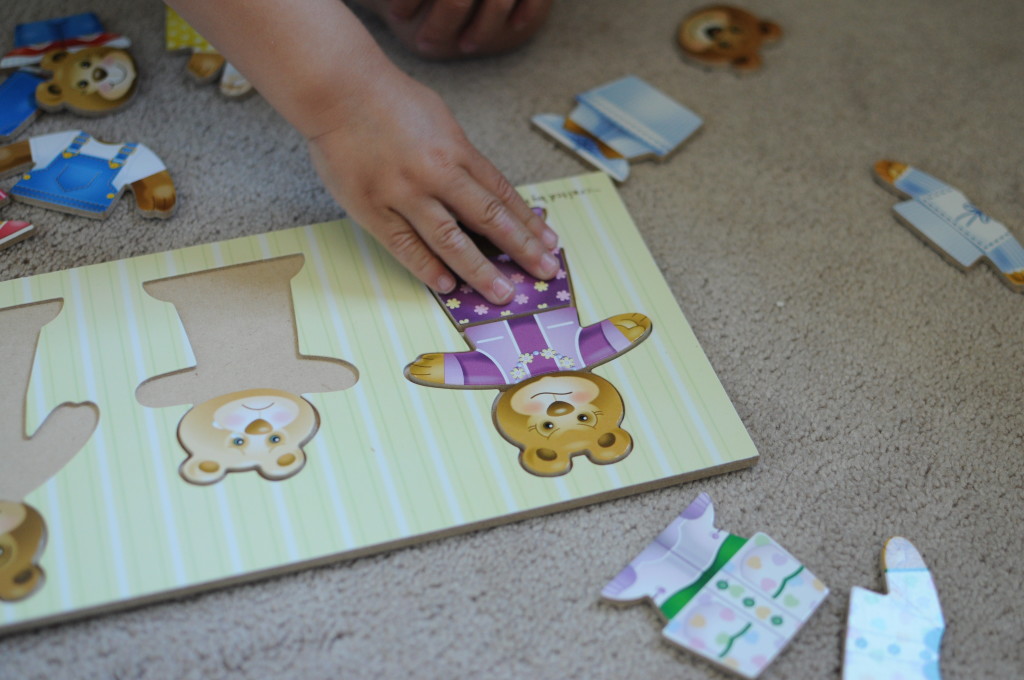 The Wooden Bear Family Dress Up Puzzle was an amazing teaching tool. As we changed out the faces, we were able to talk about emotions, as well as the time of day it probably was. Then we chose outfits according to what these answers were. Samuel loved dressing and undressing and changing the faces of each of the bears. 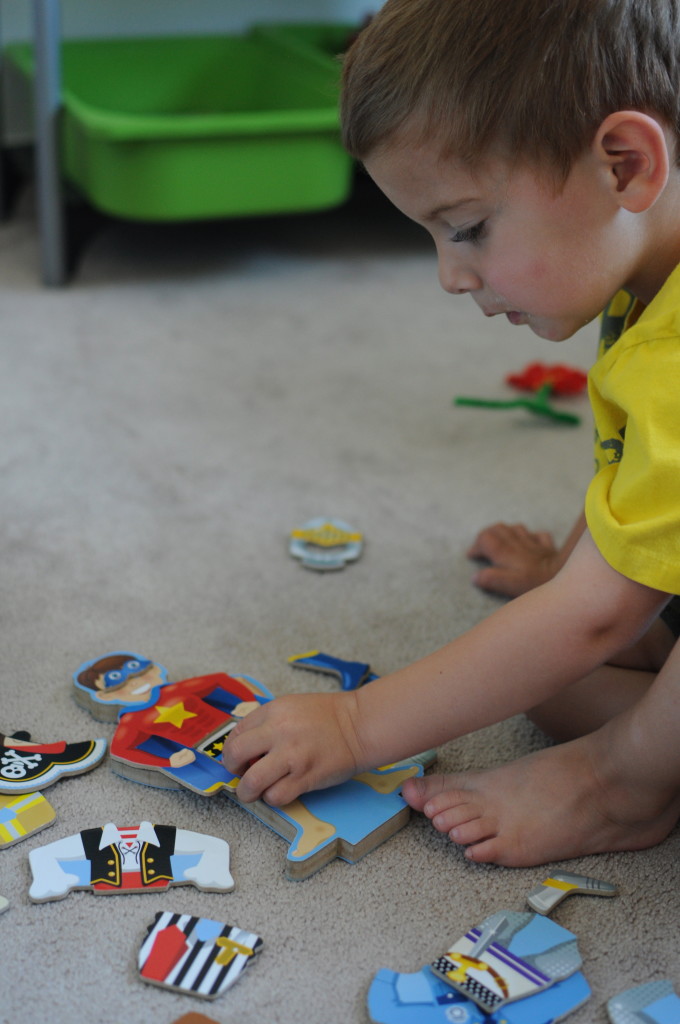 He also enjoyed his Melissa & Doug Joey Magnetic Dress Up Doll. This was only his second time seeing this set, and this time he totally loved it! He’s really into super heroes right now, so we dressed Joey up as a super hero A LOT. 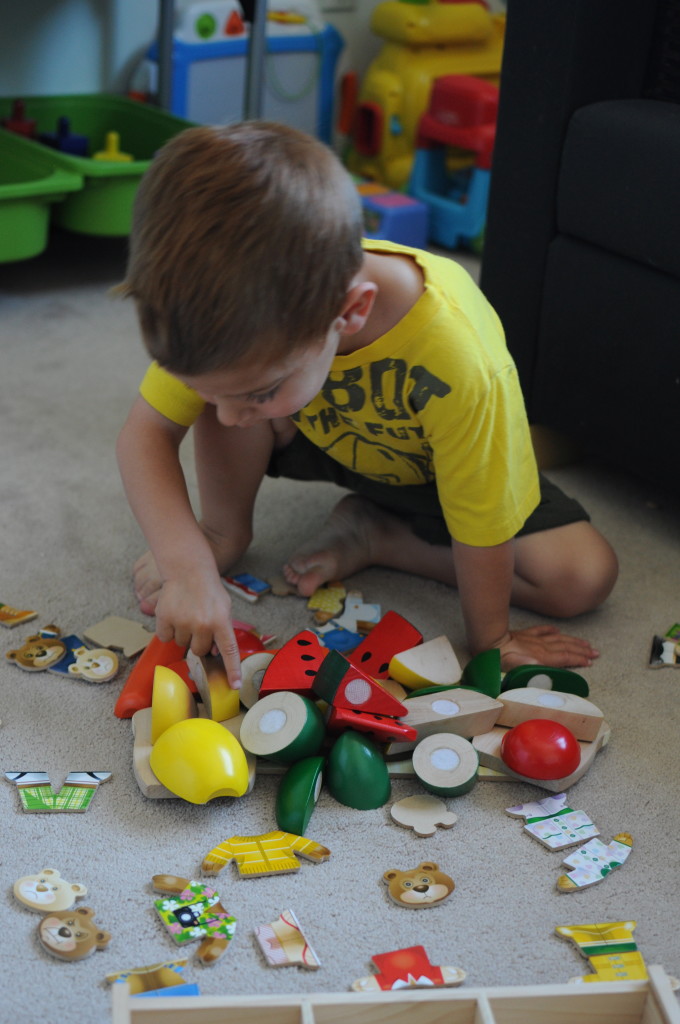 Since one of the themes in Jesse Bear is healthy food choices, I pulled out his Melissa & Doug Cutting Food Tray. See a trend? We love anything Melissa & Doug! Anyway, I was in my bedroom making the bed when Sam came running into the room.

Mommy, Mommy! I made da bears some munch! You come see?

Apparently, once he cut all the food up, he piled it all on top of the bear family and considered them well fed. He fed them lunch! I loved seeing him get creative. He really stepped up his pretend play this week, which was really fun to watch. 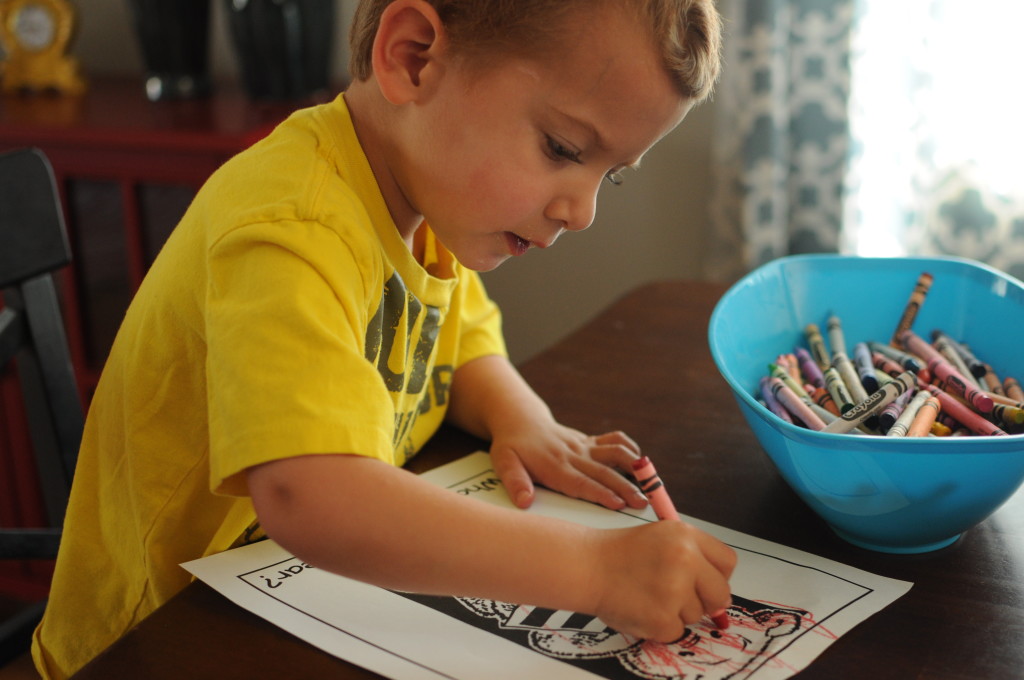 Sam still loves to color, so we made sure to do lots of coloring this week. We started by coloring our Jesse Bear coloring sheet to go in the front of our keepsake binder. 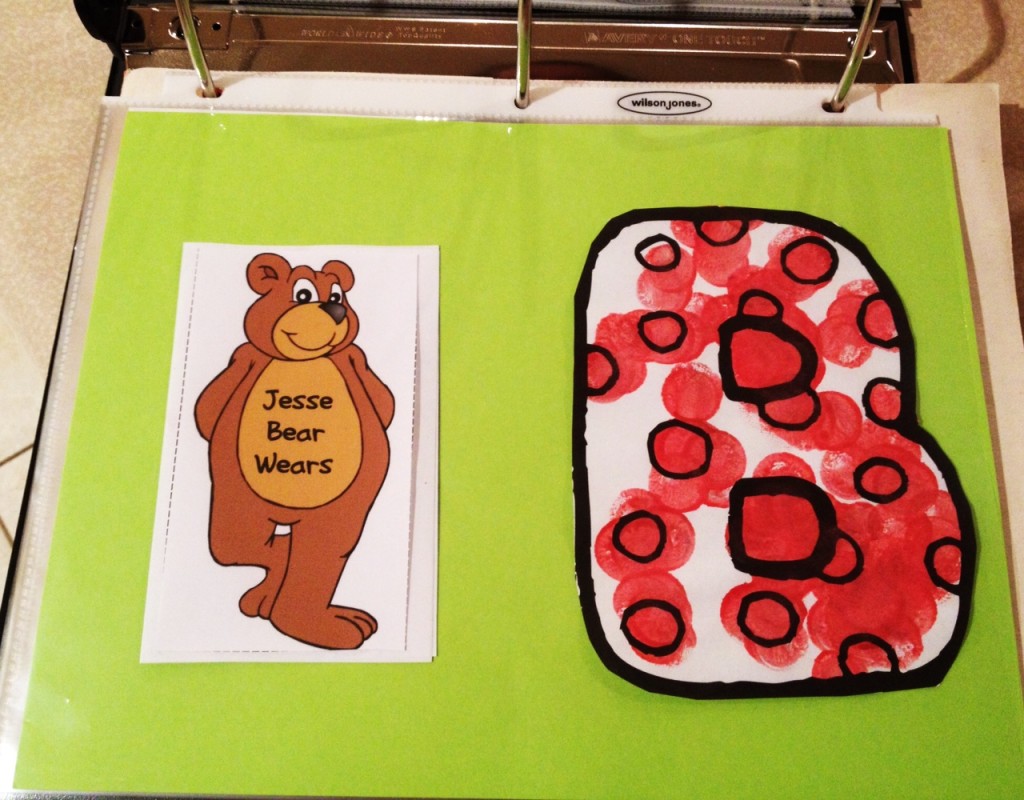 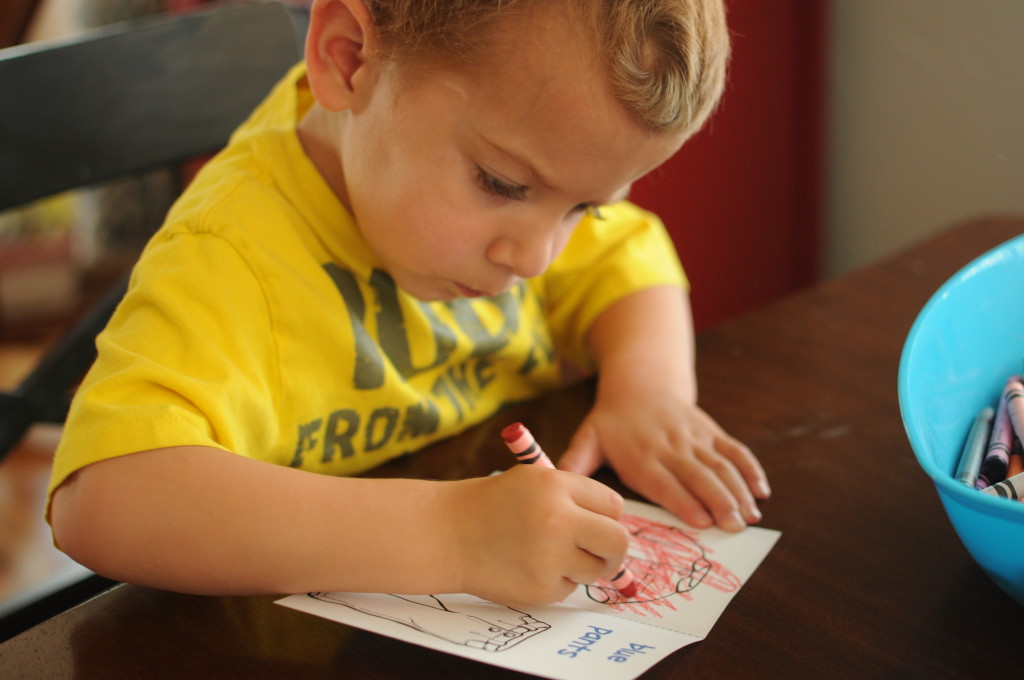 Then, we colored a red shirt and blue pants like Jesse Bear wore in the storybook. 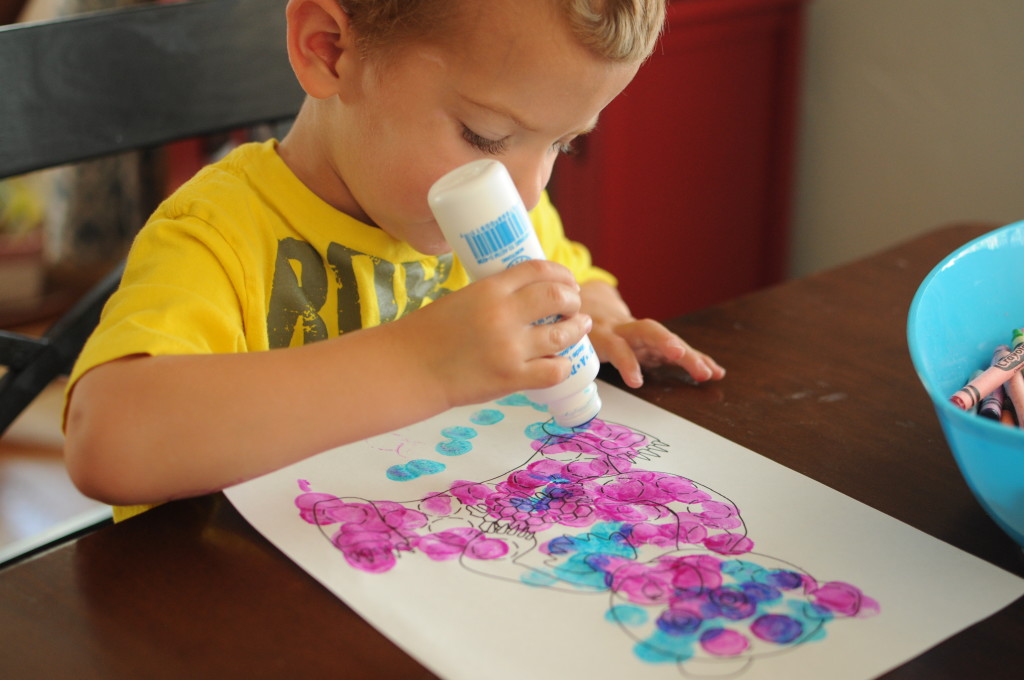 Then a little do a dot work since it’s still something he enjoys. However, after this week, I’m afraid we might have to retire them for a bit. He looks more like a jack hammer than one trying to work on fine motor skills by getting the paint in the dots. I couldn’t get him to focus on this activity. 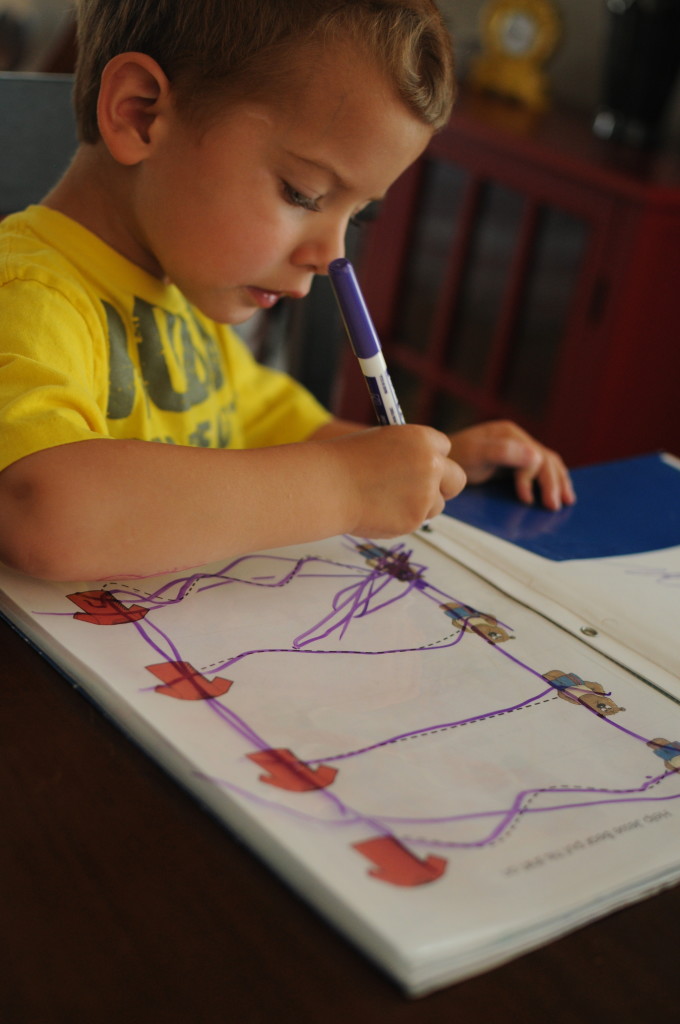 Tracing is another activity Sam enjoys. So we pulled out some pre-writing sheets I had printed off. Each week he gets better and better. This week, he managed three of the four lines! Plus he thought it necessary to draw lines down the bears and red shirts. 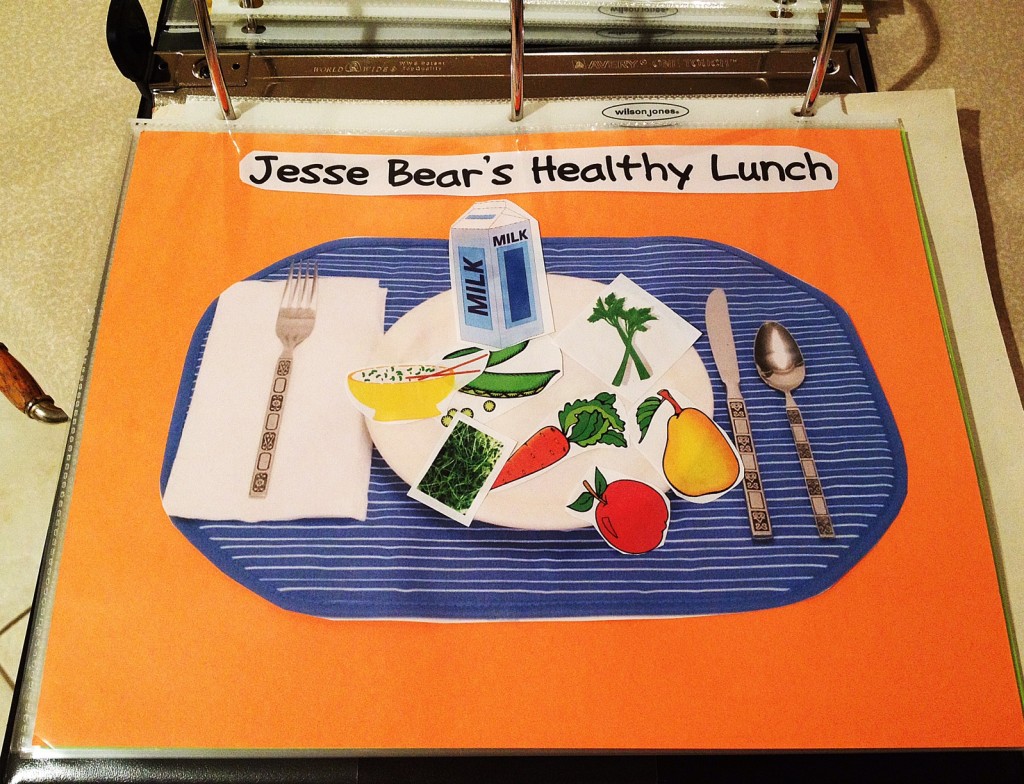 We started with pasting on our plate everything Jesse Bear had for lunch. He loved this!

We used this worksheet to color match and count gummy bears. We started by coloring each bear. 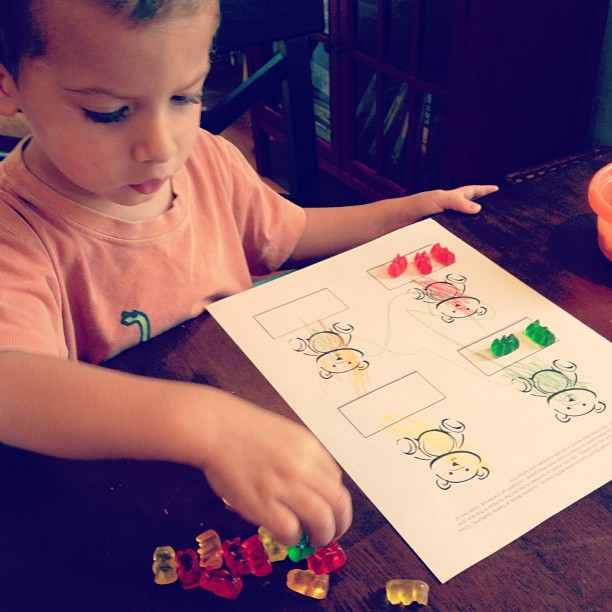 Then we sorted our gummy bears according to color. I was impressed with his self control. I honestly didn’t think he’d sort them without eating any, but lo and behold, he followed instructions perfectly! Once the bears were sorted, we counted the number of bears in each color. Then, it was time to eat them! 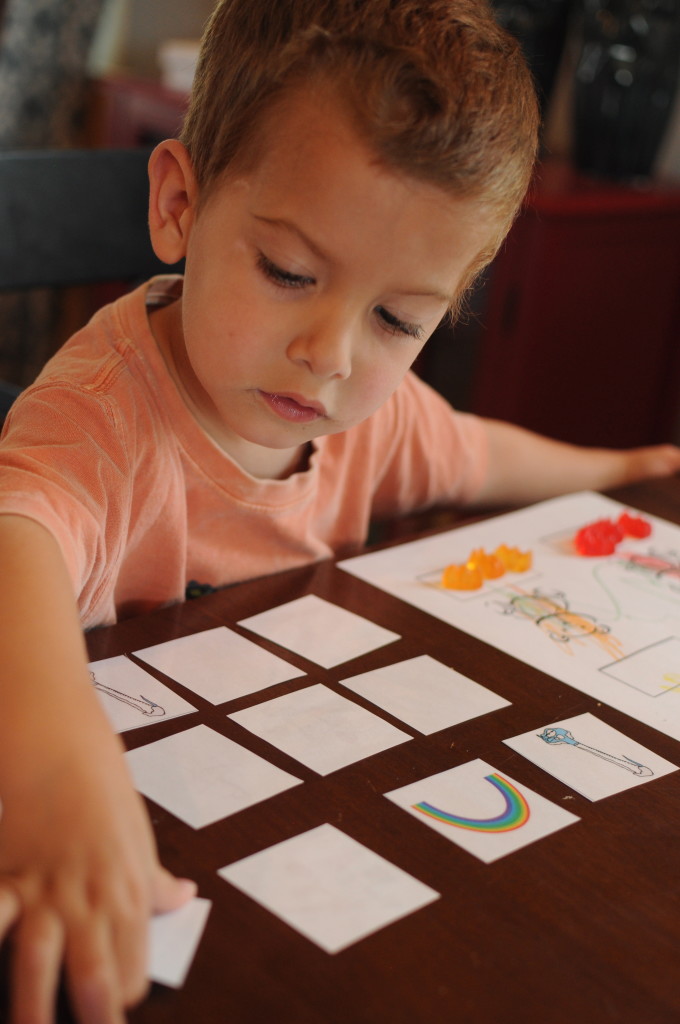 While we ate our gummy bears, we played a memory matching game. We play memory on the iPad a lot, so I was hopeful he would try to do it with actual tangible pieces. He did great except he cheated. I didn’t print them out on cardstock so he was able to see through the pieces when they were face down. Little booger would look for the match instead of trying to guess. Nevertheless, we had a lot of fun! 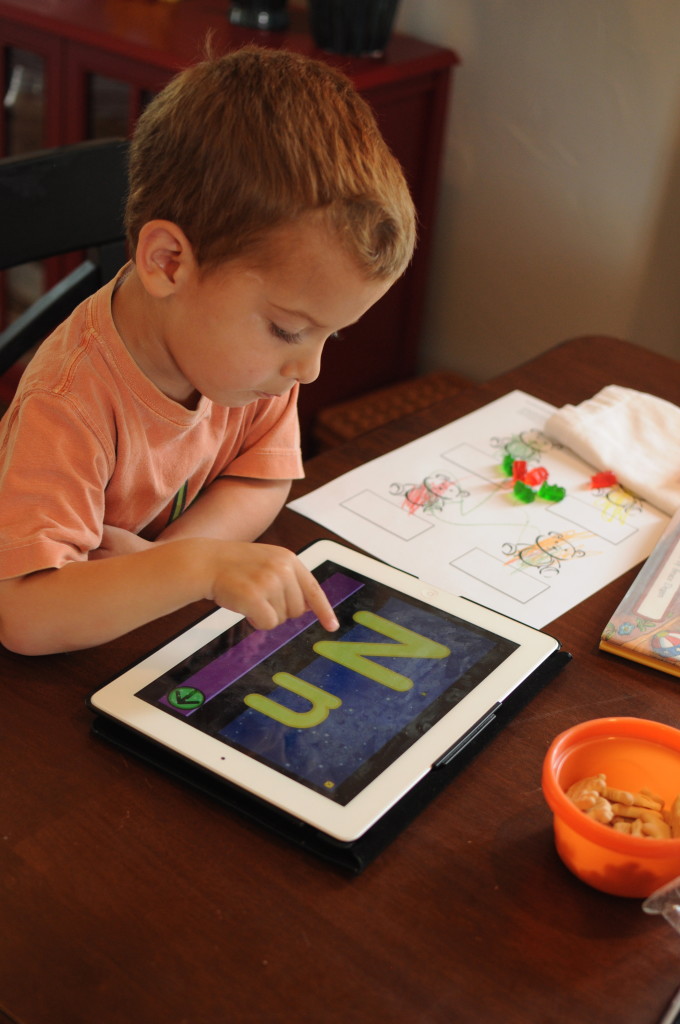 Afterward, he wanted to “do letters.” So we pulled out Starfall on the iPad. For Sam’s age, I love the Starfall iPad app as opposed to the computer version because he can manipulate the iPad by touch as opposed to mouse. Just makes allowing him to explore freely much easier! 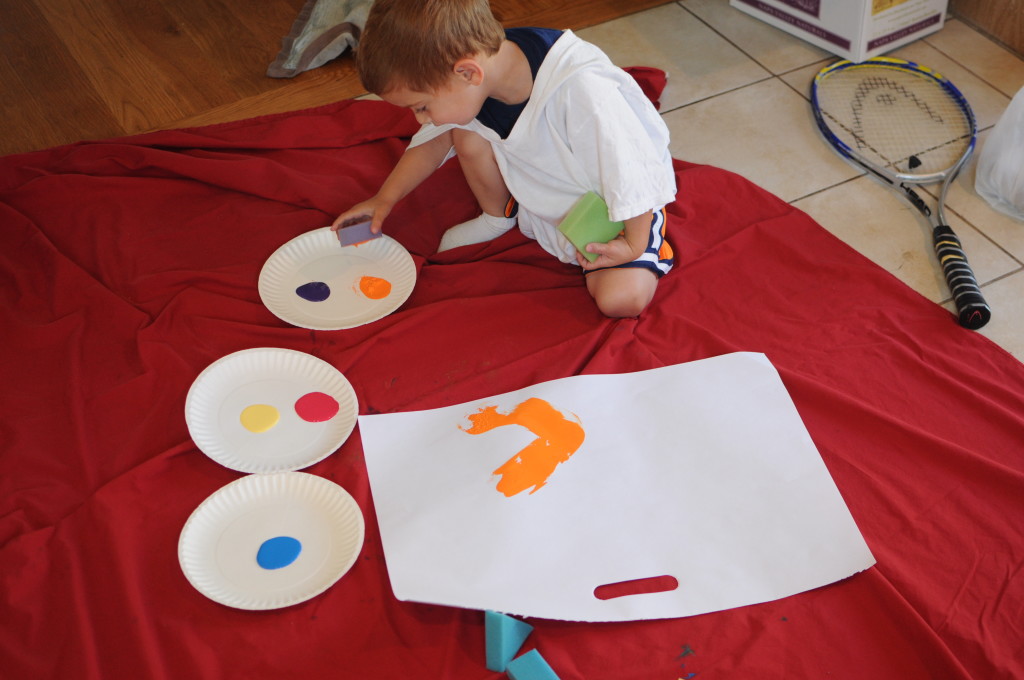 We did some sponge painting with various shapes. Granted Samuel wasn’t digging the actual shape making, but he did thoroughly enjoy the new painting medium. 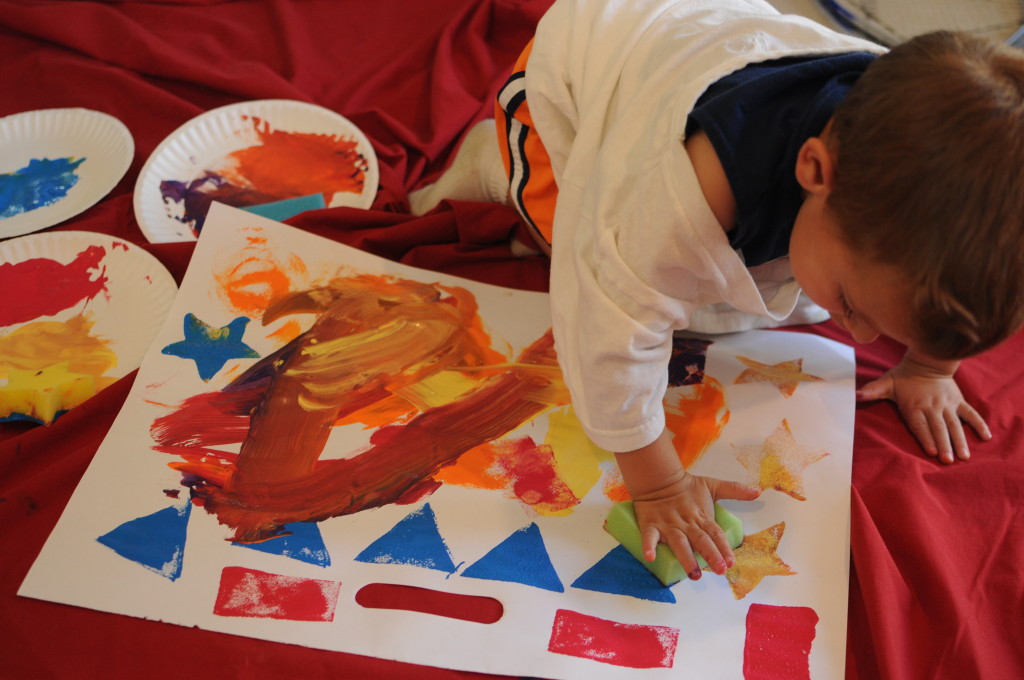 Once I demonstrated several shapes, he made one square. It was still a lot of fun! 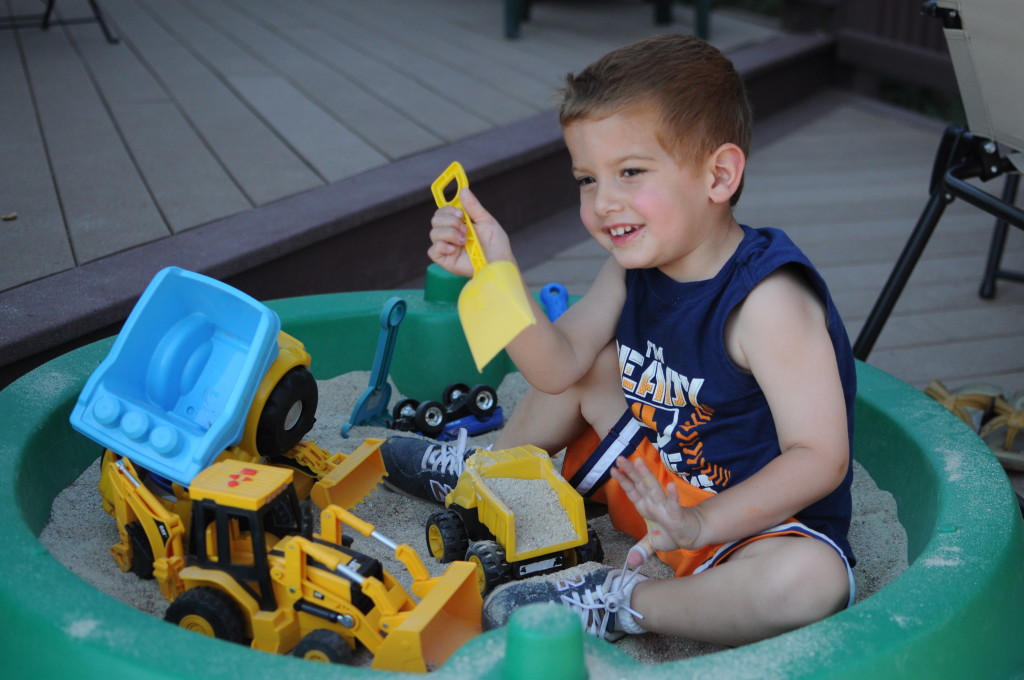 Like Jesse Bear, we played in our sandbox almost every day. He hasn’t been all that great about playing with his sandbox up until this week. So thank you Jesse Bear for making sandboxes cool. 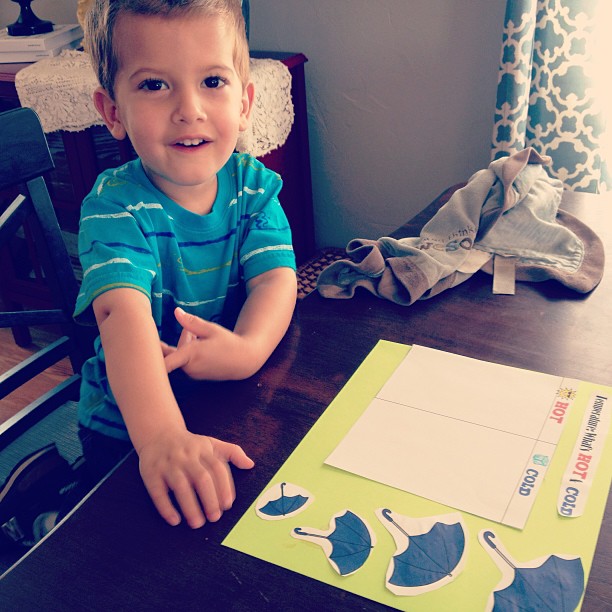 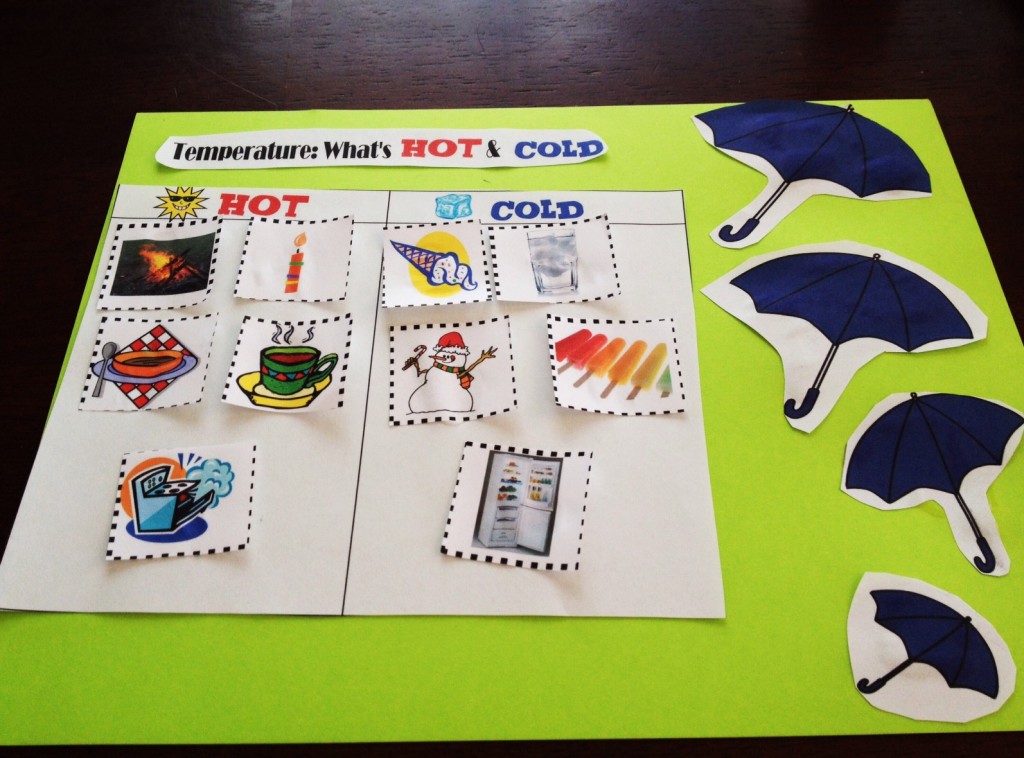 We did some pasting work while sorting umbrellas according to size (which he did all by himself) and learning about different items that are hot and cold. He didn’t quite understand the sorting into hot and cold portion, but he still enjoyed it. 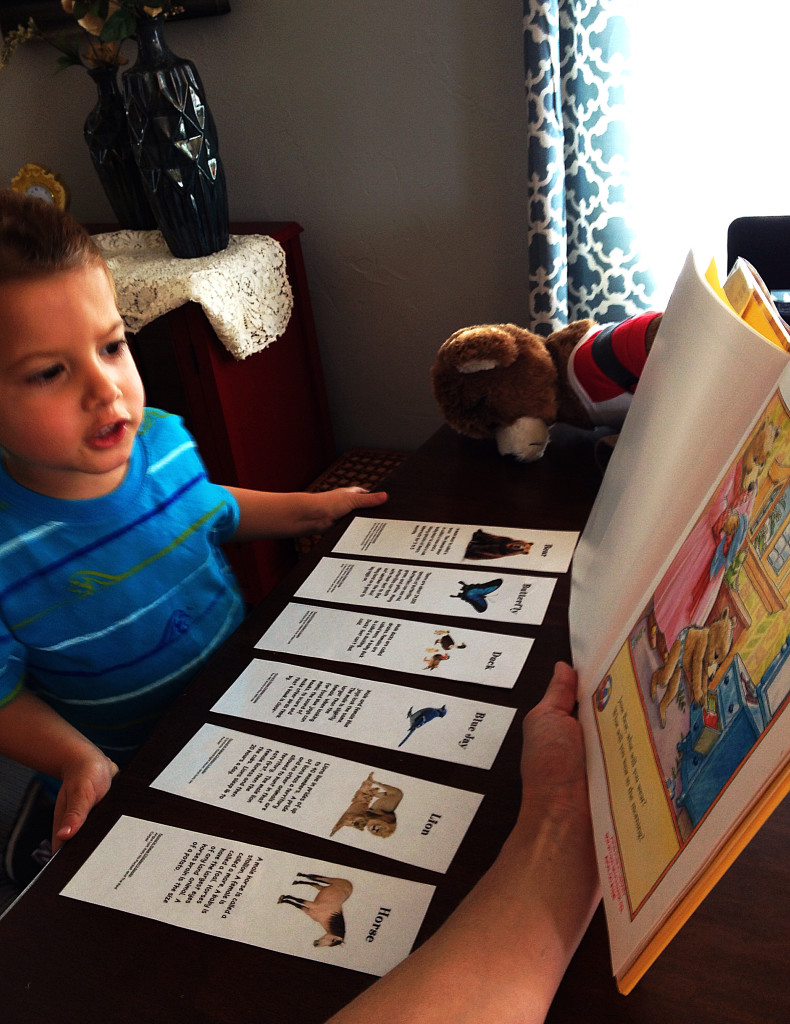 Animal classification was fun for him as always. We looked through the storybook and matched the animals to our cards and talked about the sounds they make. 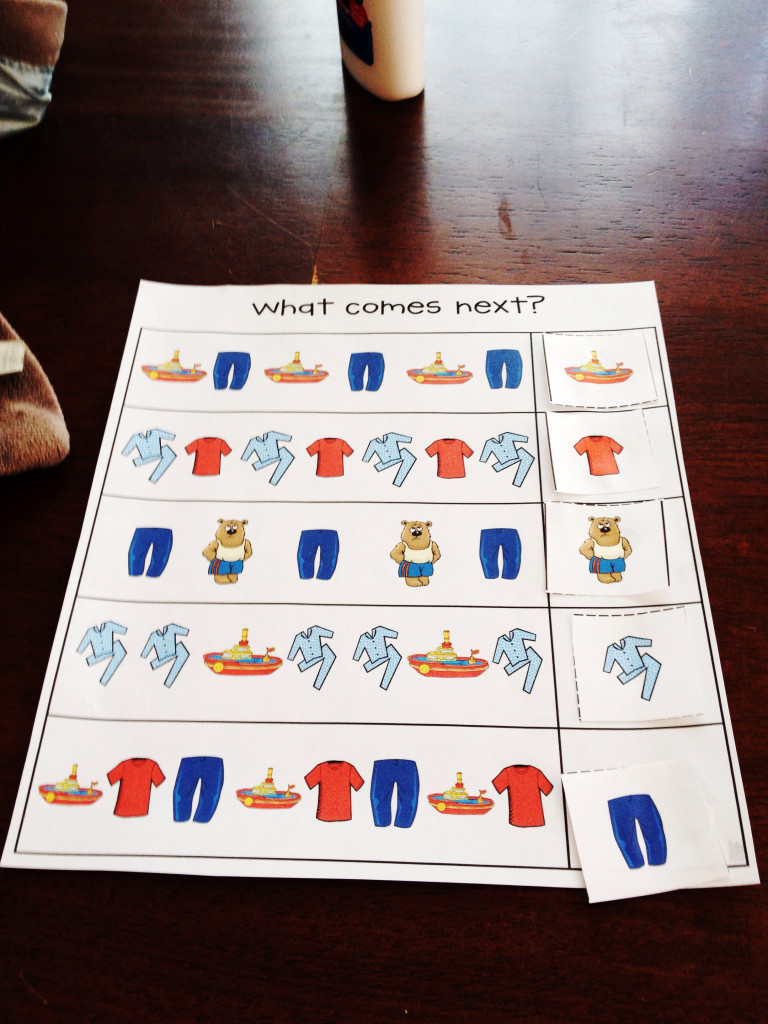 This was our first week to work on patterns. He does not understand yet, but he still enjoyed the activity. I don’t think it will take him long to pick up the concept. I loved seeing him try to understand what was supposed to come next. 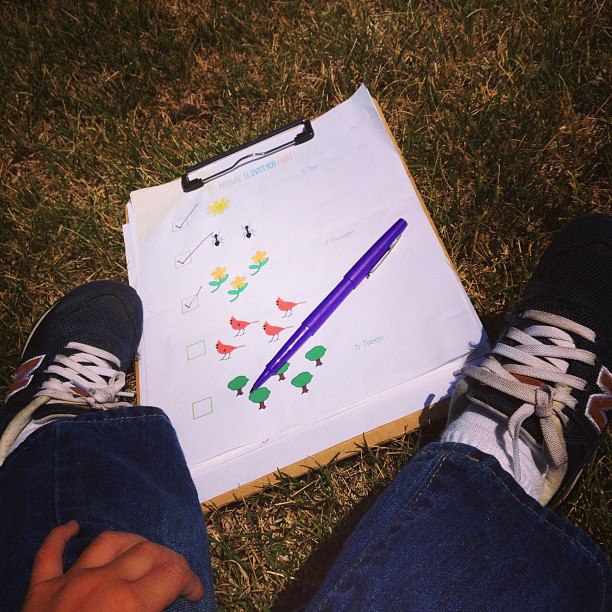 Then we headed outside for a Nature Scavenger Hunt. He adored this activity. He loved checking items off the list, and bird watching was his favorite. There will be many more of these in our near future! 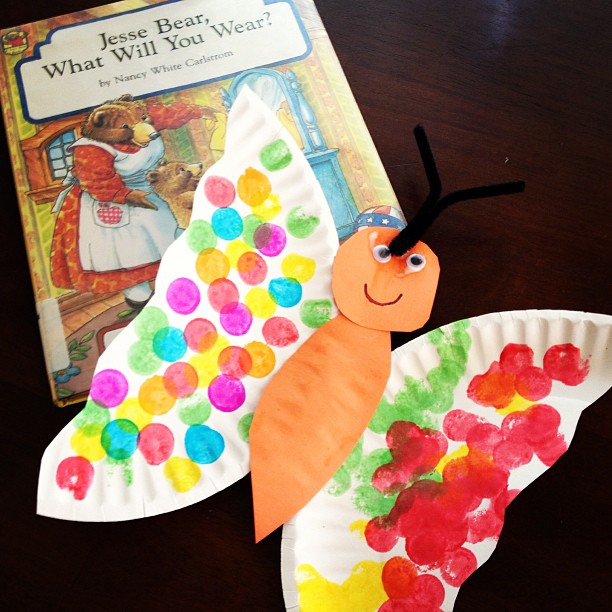 I only had plans to read the book on the final day, but he came inside from playing and said, “Mommy, I want to read Jesse Bear What Will You Wear, and do a craft. I want to do a butterfly craft.”

Well alright then. That’s what we will do. This is what we came up with on such short notice!

Another great rowing experience! It is a pure joy to watch my little guy get so excited about reading a book and doing an activity. The books become real to him and he will pretend play throughout the week with the concepts he learns.

Additional Resources for Helping You Row Jesse Bear, What Will You Wear

Why Do You Keep Rising From Your Knees
Next Post: Pregnancy: A Blessing or Just Another Thing to Complain About?