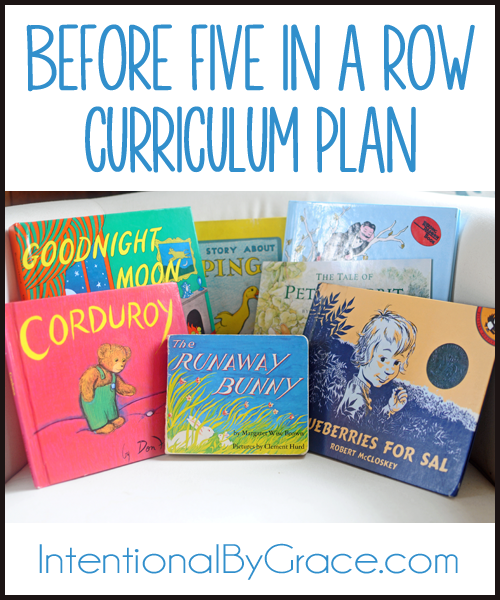 We started using the Before Five in a Row Curriculum last year. After using it for more than six months, I have fallen even more in love with it than I expected!

Before Five in a Row really captures the heart of our preschool vision for our children.

Samuel loves books, and we try to immerse him in good quality literature multiple times a day. It honestly doesn’t take much work. He is constantly asking to be read to! What I continue to love about this style of curriculum is that it’s okay to just read the book every day for five days in a row. Some seasons are busier than others and this curriculum can be enhanced or used as is. I love this relaxed, but intentional, approach to teaching my toddler.

Putting together a plan for the books I want to row really helped a lot last year. Therefore, I took some time recently to put together a new plan! We’ve already started implementing this plan, and I hope to share some updates with you soon.

I plan to repeat some of the books we have already rowed because I can expand on what we’ve previously done. I will also begin looking at the next set of books from the Five in a Row Curriculum (geared toward 4-8 year olds) for the fall of this year soon. I’ll be sure to keep this post updated so you can refer back to it to see what we’re rowing and how!

Samuel is currently 3 years old at the start of this plan.

Links are updated as we row each book!

Play with Me by Marie Hall Ets

Prayer for a Child by Rachel Fields {We rowed this book simply by reading the book five days in a row and baking Crusty Bread together.}

I Am an Artist by Pat L. Collins

The Carrot Seed by Ruth Krauss

If Jesus Came to My House by Joan Gale Thomas

The Red Carpet by Rex Parkin

The ABC Bunny by Wanda Gag

We have no plans to row any books in December. We will be using Truth in the Tinsel with Samuel to prepare our hearts for Christmas. We did this last year and loved it!