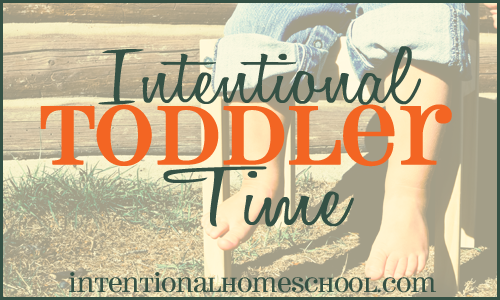 I’m so excited to finally dive into our Before Five in a Row curriculum plan. I decided to row the book Corduroy by Don Freeman with Samuel first since he’s already familiar with the story. On Sunday night before we were to start I could hardly contain my excitement. I thoroughly enjoyed preparing this little unit on Corduroy. 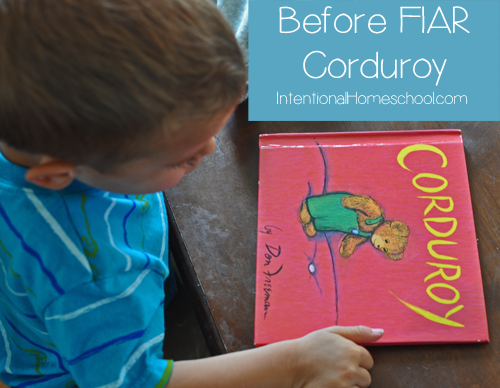 We began by reading the story in its entirety just like we would any storybook. I can always tell when Samuel is really into a story, he leans so close to the book, taking in all the pictures, that I have to work hard to peer around his little head to read the words. He really loves the book Corduroy and this read through was even more interesting to him as he’s becoming more and more observant.

After we read the story, I turned to the page where Corduroy makes it up the escalator and he’s staring at the enormous room of beds, lamps, and furniture. We took turns counting the lamps we could see and then we counted the beds. Afterward, Sam decided we should count the chairs too. This wasn’t on my list of things to do, but I readily agreed because he was interested in what we were doing. I loved seeing him come up with ideas (more proof that he’s growing up … *sigh*) We proceeded to count the chairs and point out the different color beds and lamps at his request.

Then, I pulled out the animal classification cards for this particular book, which I found at Homeschool Creations. I laid them all out in front of us and then we looked through the storybook again. I asked Samuel to see if he could find any animals in the pictures as we flipped. Again, he caught on so quickly! He’d point out the animals on each page and then point to the animal classification card that it matched. We did this several times before he tired of it. He loves animals, so I shouldn’t have been so surprised. 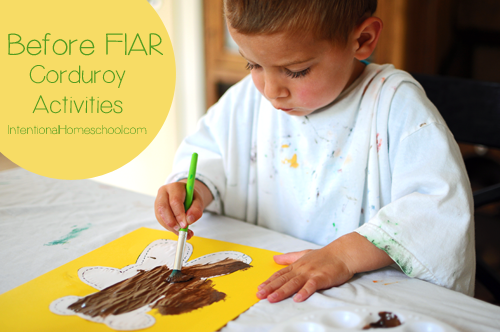 Then we started a craft together. I found a simple bear template online and cut it out for him to glue onto card stock. I let him paint the bear brown. On another day after the bear had dried, we glued on green overalls (construction paper), buttons, googly eyes and drew a nose a mouth. I stayed pretty much hands off because I let him to enjoy the process, and I wanted this craft to be all his. I envisioned a much “cuter” version of Corduroy, but his two year old interpretation was wonderful too. Plus he was so proud (no final pic, sorry!). 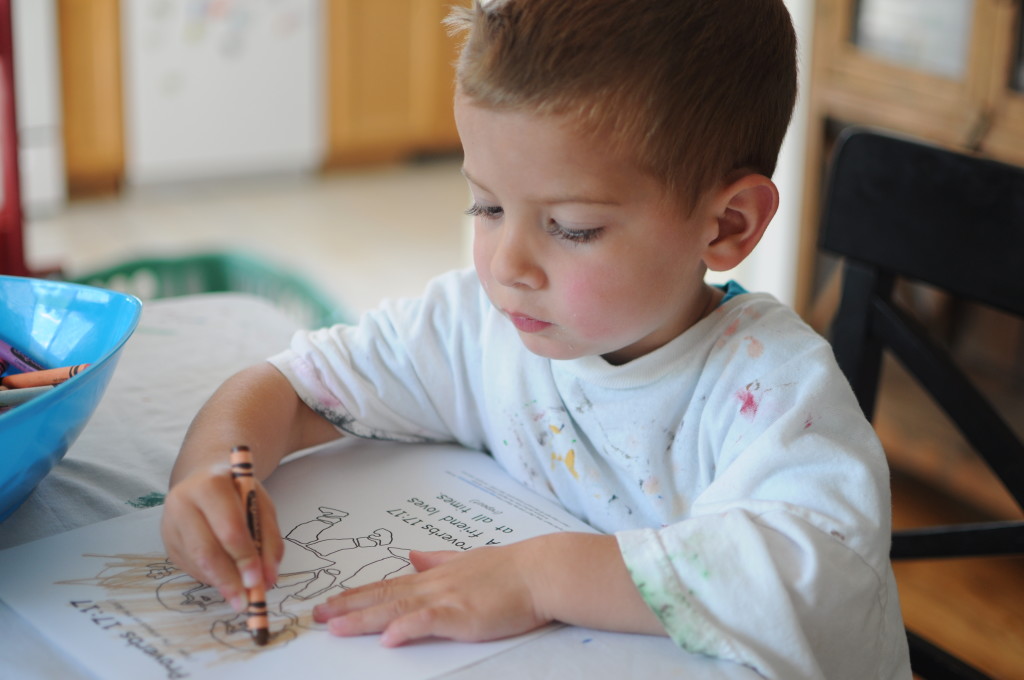 We talked a little bit about Proverbs 17:17. While he colored his coloring sheet of the verse, I had him repeat the verse after me. But he was not into coloring today, so we moved on. But we continued talking about friends and who our friends are throughout the week, as well as our upcoming arrival being his brother or sister. This went along with Corduroy and Lisa always wanting a friend!

Finally, we worked through some of the toddler trays I had prepared, which we continued to do all week. He would often pull out his toddler trays during free play time as well, which of course made me happy!

He loved this button counting activity. I made the cards out of foam rectangles I had on hand (found at Dollar Tree). Then drew circles and wrote the corresponding numbers (1-10) with permanent marker. We pulled out our jar of buttons and practiced counting over and over again. He loved this! 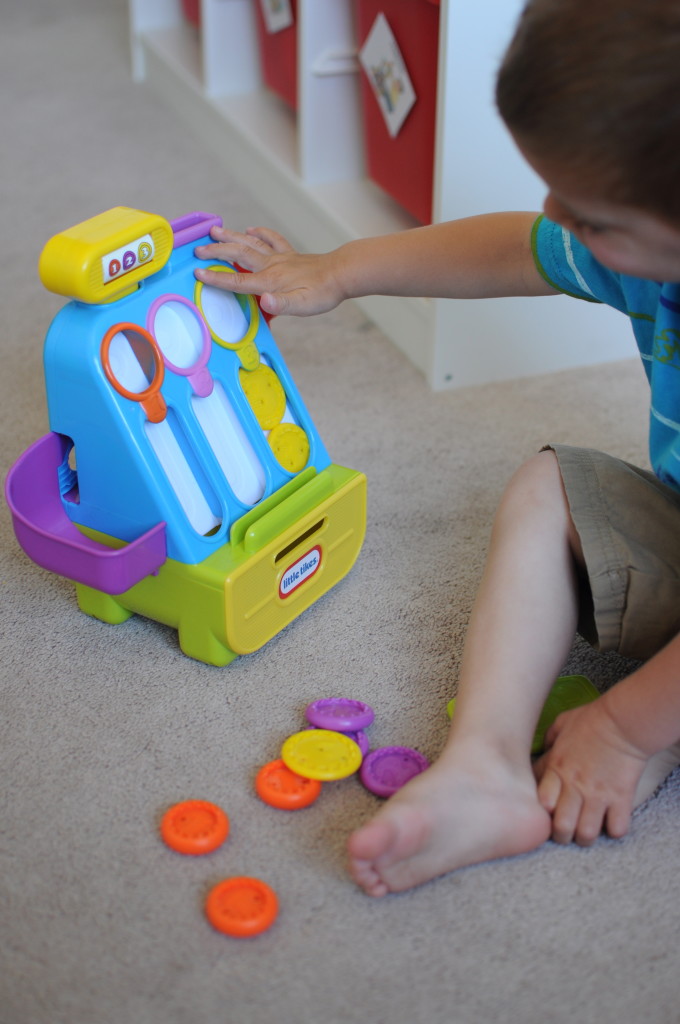 Since one of the themes of Corduroy was about saving money, I pulled out his cash register learning toy for one of his toddler trays. 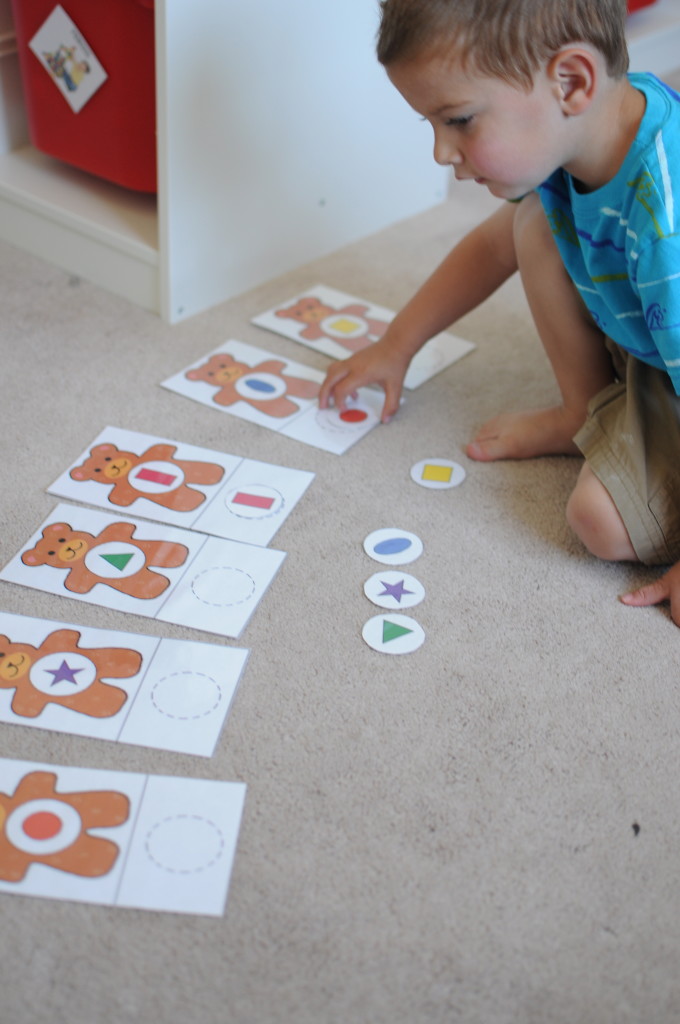 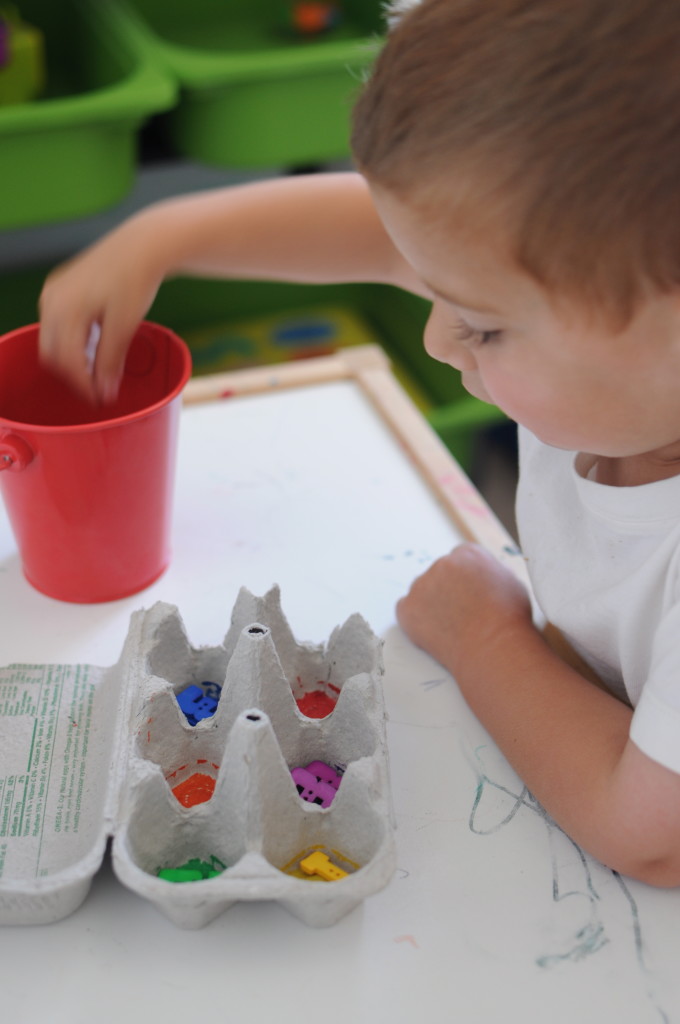 Button sorting by colors was another toddler tray of the week. I cut an egg carton in half, colored the bottom with six colors, and gave him some buttons in the same colors to sort. 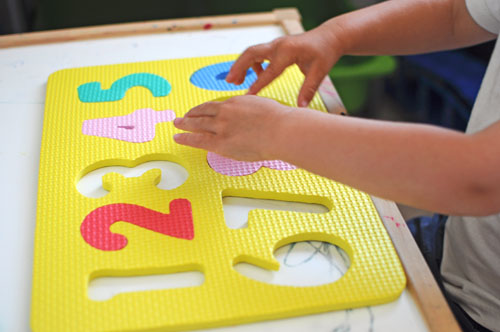 This foam number puzzle continues to be a favorite in our home. I snagged this jewel at the Dollar Tree and we use it weekly.

His sixth tray was lacing beads, but he continues to pass over them with zero interest. Maybe some day…

Again we started by reading the book, Corduroy, together. Then since he wanted to continue “reading stories,” we read a several other go along books that I picked up from the library over the weekend. We read stories for well over an hour. It is hot outside so books have been about the only thing we do during the middle of the day! 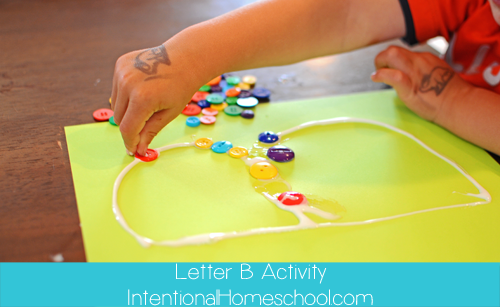 We did a little craft together using buttons to make the letter B. Just a little glue outlining the letter B and some random buttons. 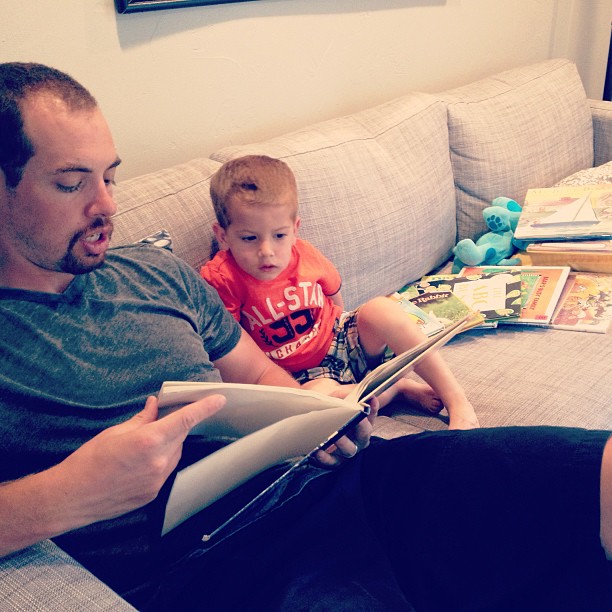 This was the normal routine when Daddy came home from work this week. “Daddy, pwetty pwease read to me?”

We read through Corduroy together again. He was not happy about Lisa taking Corduroy home. According to him, Corduroy wanted to stay in the palace.

Afterward we headed to the kitchen to make button cookies. I got the idea from bakerella.com, but since we don’t keep packaged cookies on hand, or peanut butter, I concocted our own little almond butter cookie recipe and used it instead. I did not have the patience to make them as small as little buttons, so we made do with regular sized cookies that looked like buttons. I’ll try to post the recipe I used later (will update this post when I do).

While we waited for our cookies to bake, we read more stories. This kid will literally read for hours on end!

Since we were traveling on this day, we only read the book together before hitting the road.

We spent the day in Denver as a sort of last “hoorah” before new baby. I took him to Barnes & Noble where we hung out in the children’s section. I let him explore and we inevitably ended up in the storybook section. He even found … Corduroy!!! 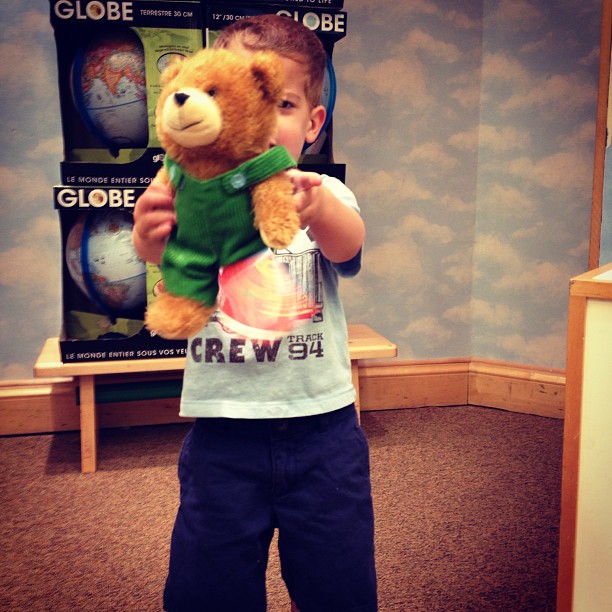 His face when he saw Corduroy sitting on the shelf was priceless. For the next hour (yes hour), we sat in the floor of Barnes & Noble reading stories with Corduroy wrapped tightly in his little arms. When we got ready to leave, I told him he needed to put him back like Lisa did because Mommy didn’t have any money for Corduroy today. He loved it! Plus I had other plans for the evening! 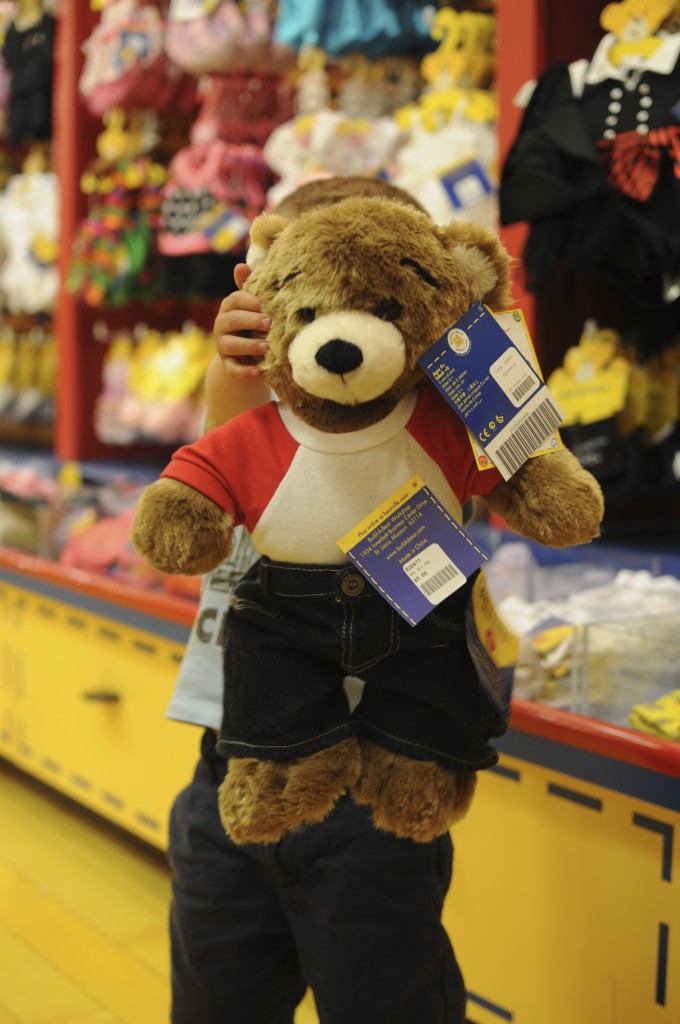 I wanted to create a memory with Samuel and take him to Build-a-Bear to create his very own Corduroy. We planned it so we could go after dinner so Daddy could join us. Of course, they didn’t have green overalls, but we dressed him up and later worked with Grammy to get suspenders and buttons to go with his outfit. Samuel picked out the entire outfit! I was shocked and very thankful it all matched! A good warm up to Jesse Bear, What Will You Wear? 😉 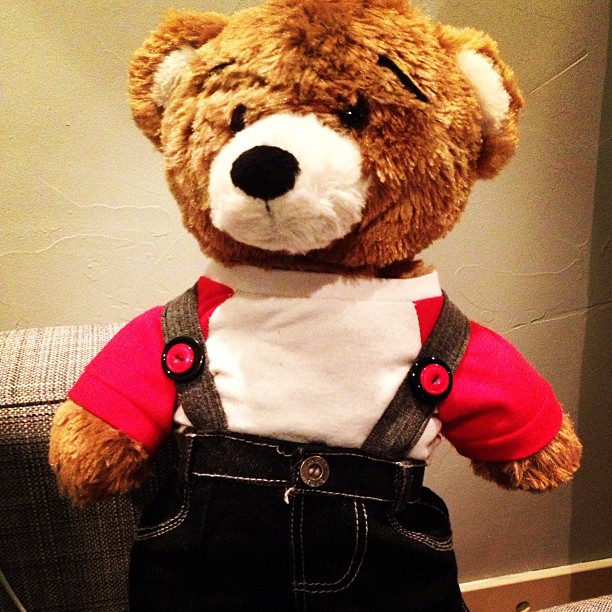 What a fun start to our rowing adventures. We both thoroughly enjoyed our week as we rowed one of my favorite books, Corduroy.

Be sure to check out our plan and other books we have rowed here.

Summer Themed Printable Packs for Your Toddler or Preschooler
Next Post: 12 Summer Literacy Activities for Toddlers