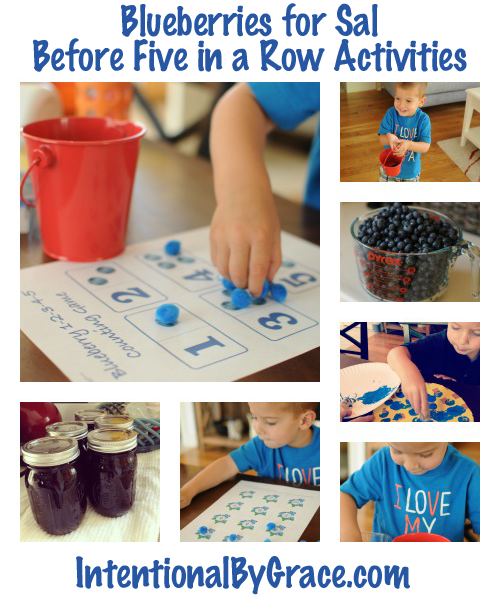 This week we rowed Blueberries for Sal by Robert McCloskey. A great book for the summer months. Reading this story made me miss the south, but that’s neither here nor there.

Samuel really enjoyed this book. We kept it relatively low key this week (Mama was tired and it was an act of will that we did anything at all!). I didn’t do toddler trays or plan a whole lot.

Other than our canning of blueberry jam day, we spent approximately 15 minutes each day on activities. But Samuel did his own thing in his free time. I often heard him “storing up blueberries for winter” with his stuffed animals, and he picked berries off a tree with his neighbor “like blueberries for Sal.” There was a lot of pretend play this week, which made me so happy!

Day 1 with Blueberries for Sal 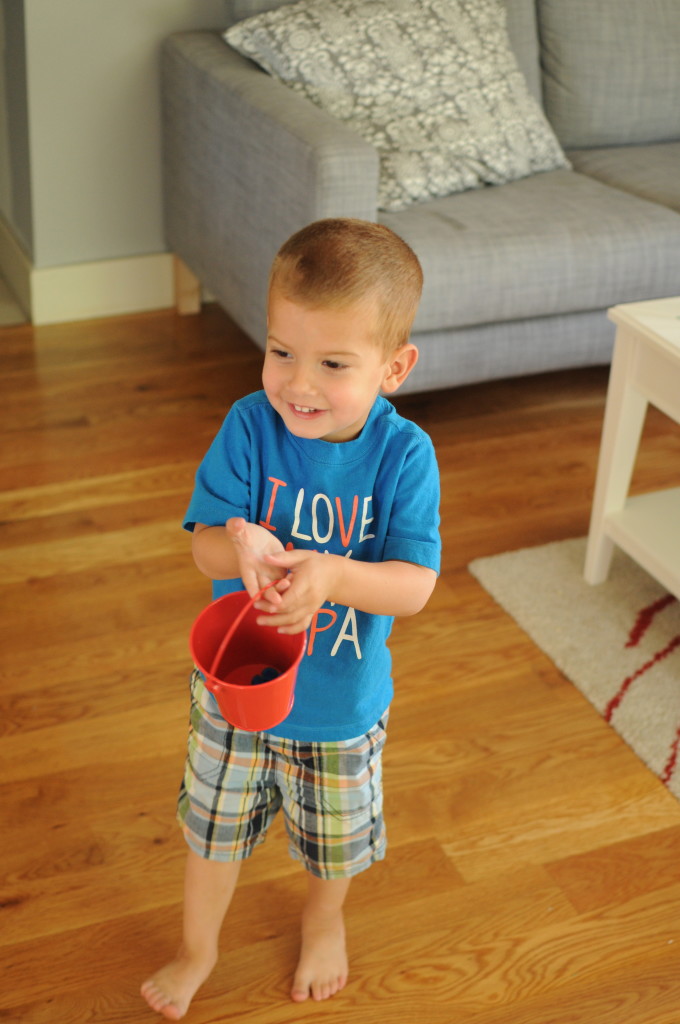 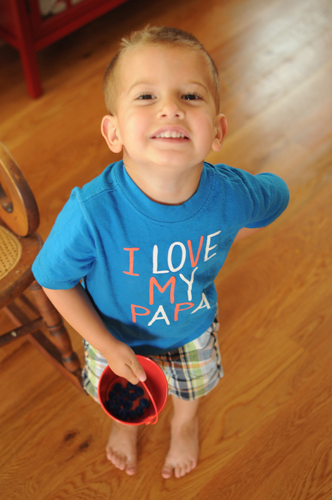 We started our enrichment activities with a blueberry hunt in the living room. He loved this, but it didn’t hold his attention. We did it a couple of times, and then he was ready to move on (reminds me of our egg hunt in the Spring…he was more interested in the balls in the yard than the eggs!). For our hunt, I just hid blue pom poms around the room and we pretended we were picking them off the bush. 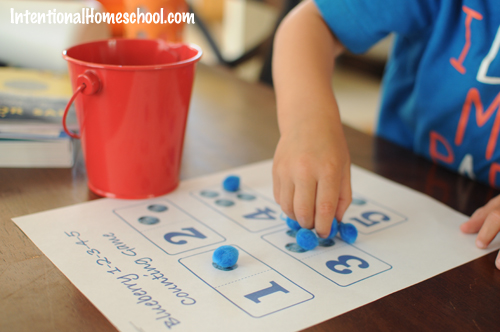 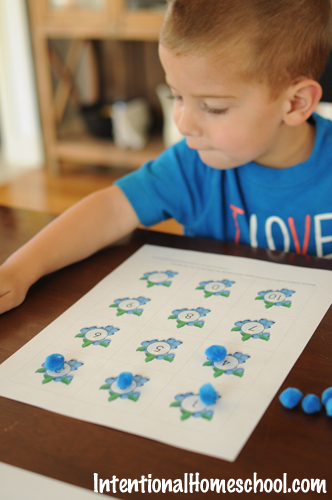 Day 2 with Blueberries for Sal 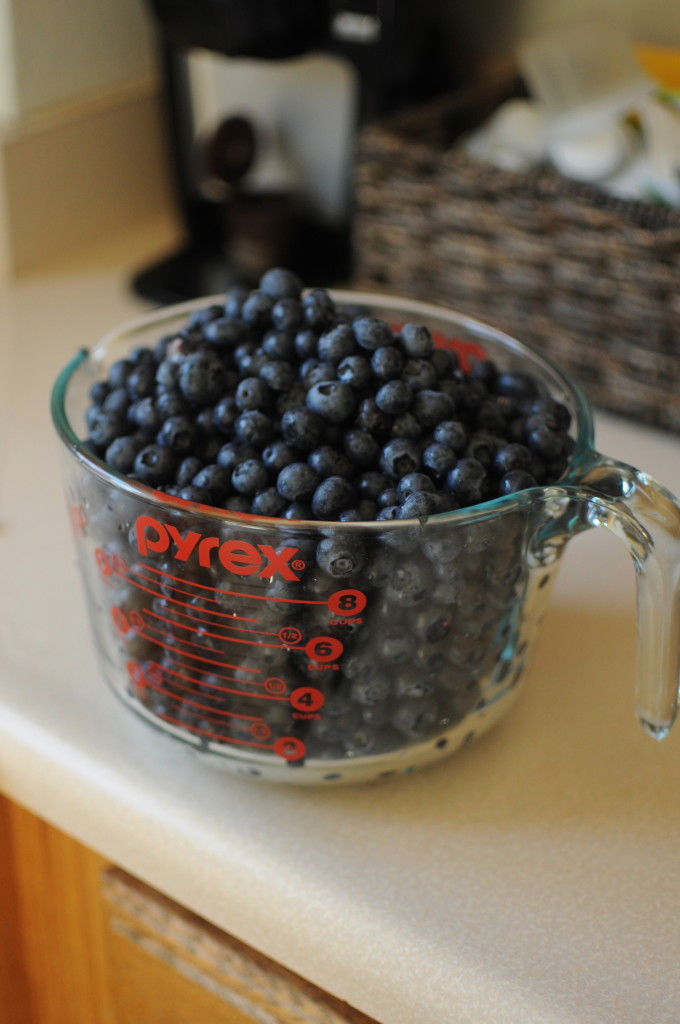 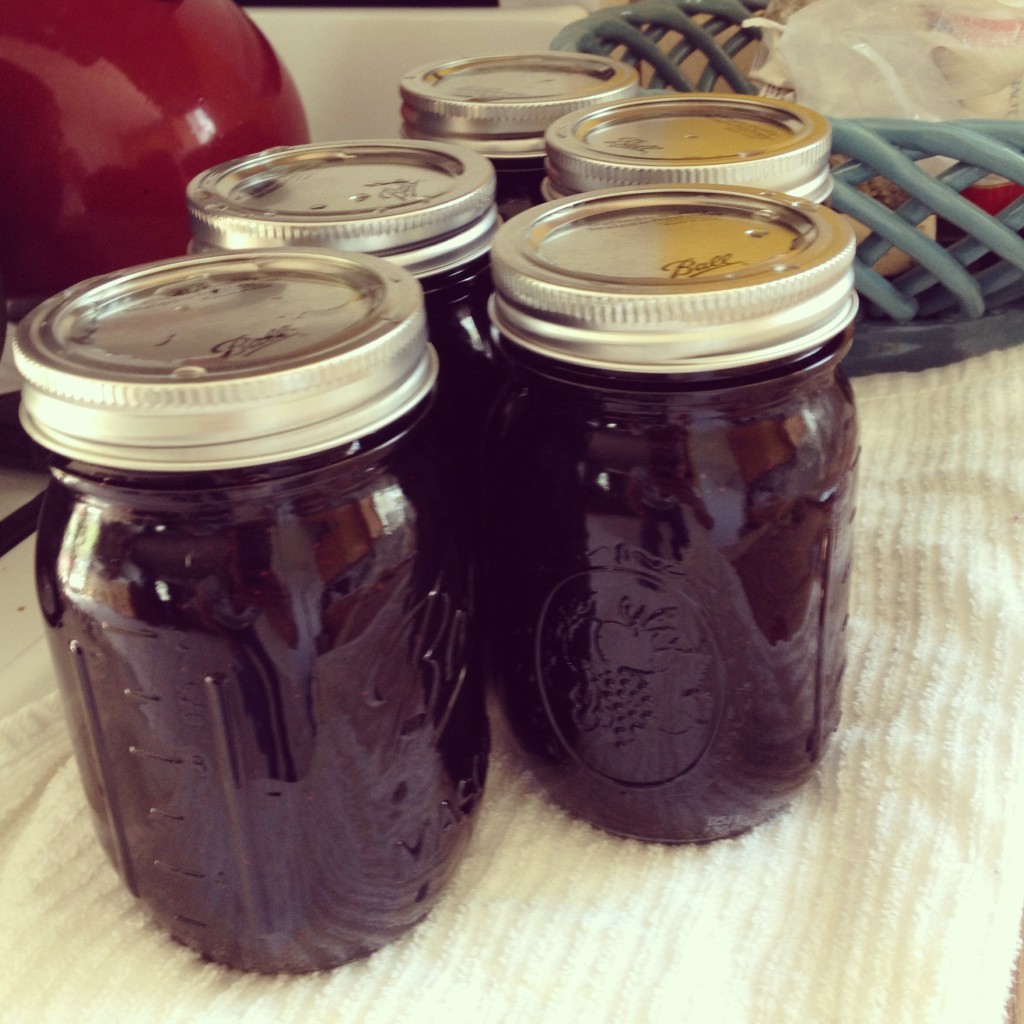 Since we don’t have a place nearby to pick our own blueberries, we pretended to pick blueberries around the living room again. Then we made blueberry jam with the blueberries I got on mega sale at the grocery store. He was very interested in our “storing up food for the winter.”

The entire process of making blueberry jam was too slow for him, and he bailed on me about midway through. He did help me get all the blueberries washed and pureed. Then he measured out the pectin and sugar, but from the boiling part on … he lost interest. I was impressed with all that he DID do!

After we were all done, he thoroughly enjoyed his almond butter and blueberry jam sandwich at lunch time. He was so proud!

Day 3 with Blueberries for Sal 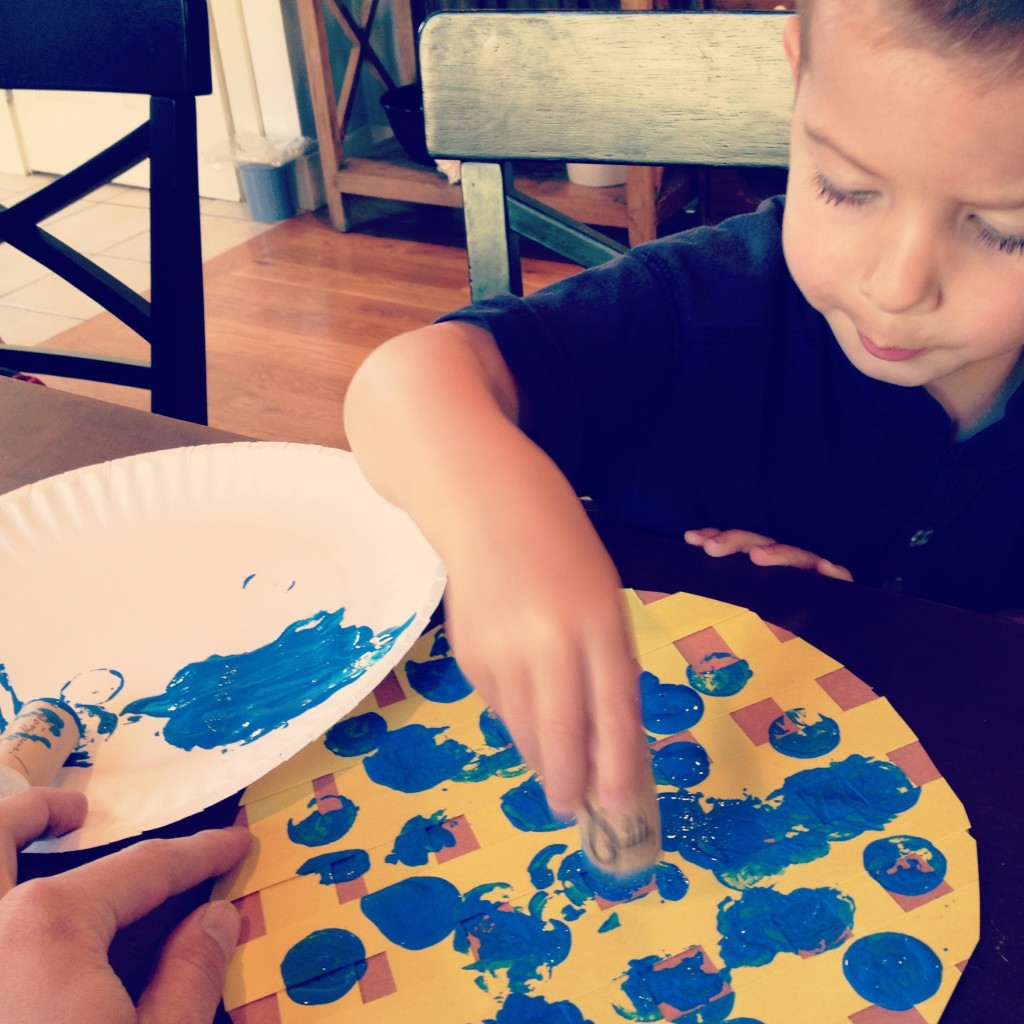 We made pretend blueberry pie to supplement our reading. I cut the circle and strips out before hand, then let him use a glue stick to glue on each strip. I didn’t realize it beforehand, but this activity was a great pre-writing activity  because he had to draw straight lines with the glue stick in order to paste the strips onto the circle.

Once we had the strips glued on, I cut around the circle to remove the excess strips. Then I gave him some blue paint and round cork from a bottle to make blueberries on his pie. He wasn’t into just making dots and instead wanted to smear it all everywhere. But he thoroughly enjoyed making his blueberry pie.

When Daddy got home, he was sure to tell him all about it!

Day 4 with Blueberries for Sal

While reading the story, I pulled out our tin pail of “blueberries” and acted out Sal picking and eating the blueberries. When she added blueberries to the pail, we did too. When she ate one, we did too. This was a great introduction to counting, as well as simple addition and subtraction.

After reading the story, we worked on some of our printables. 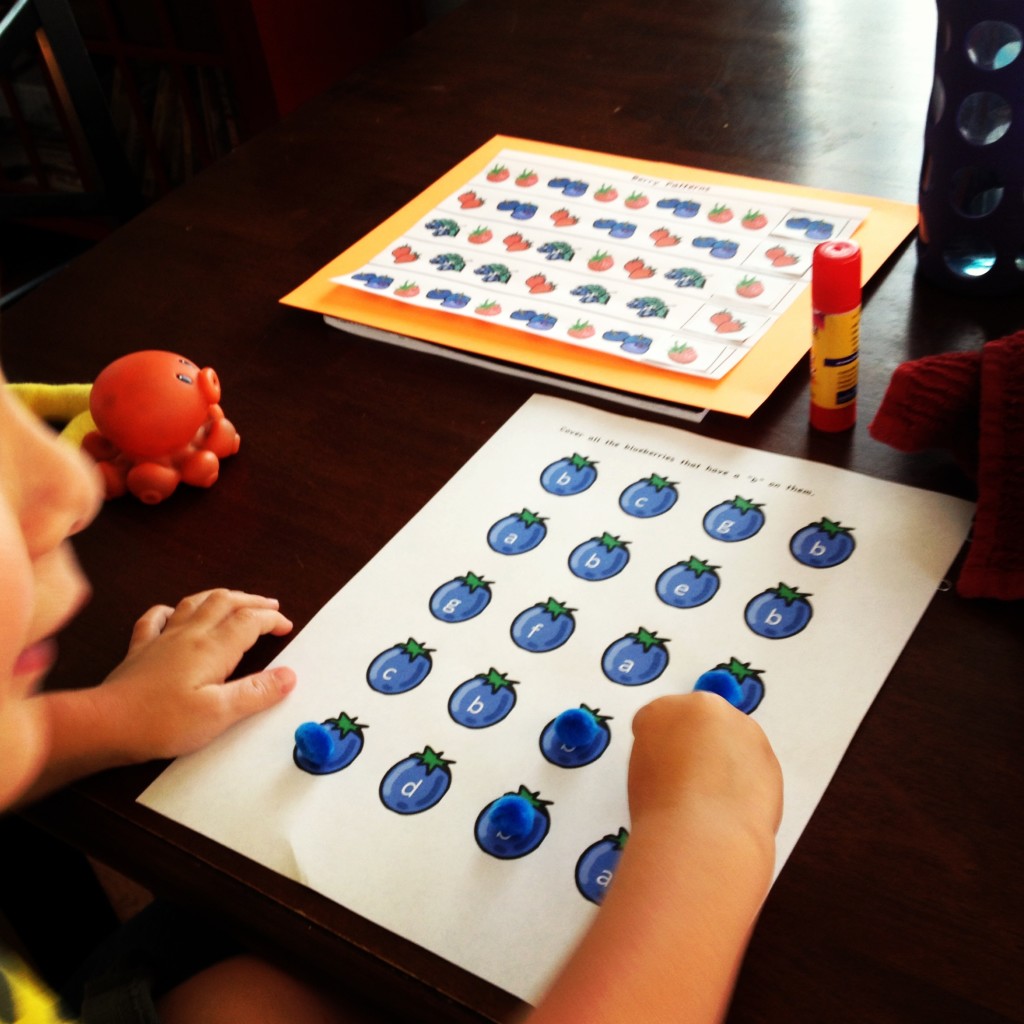 We worked on patterns and pasting (shown top left). Find the letter “b” was a hard activity for him, but he caught on and worked really, really hard at it. 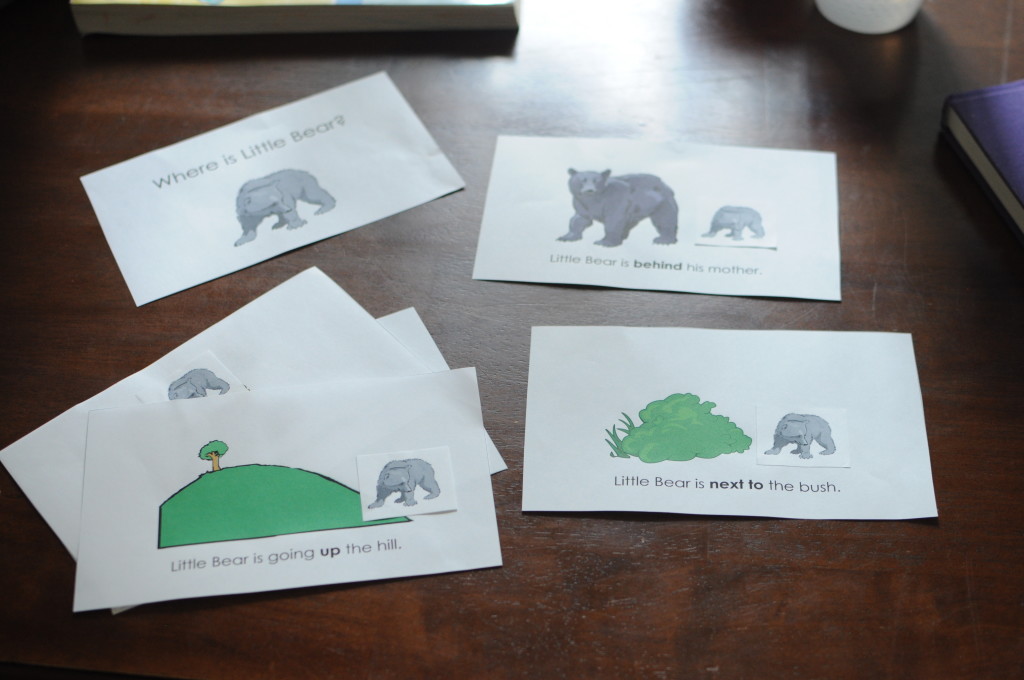 We worked on directional words with a simple Where is Little Bear? book. 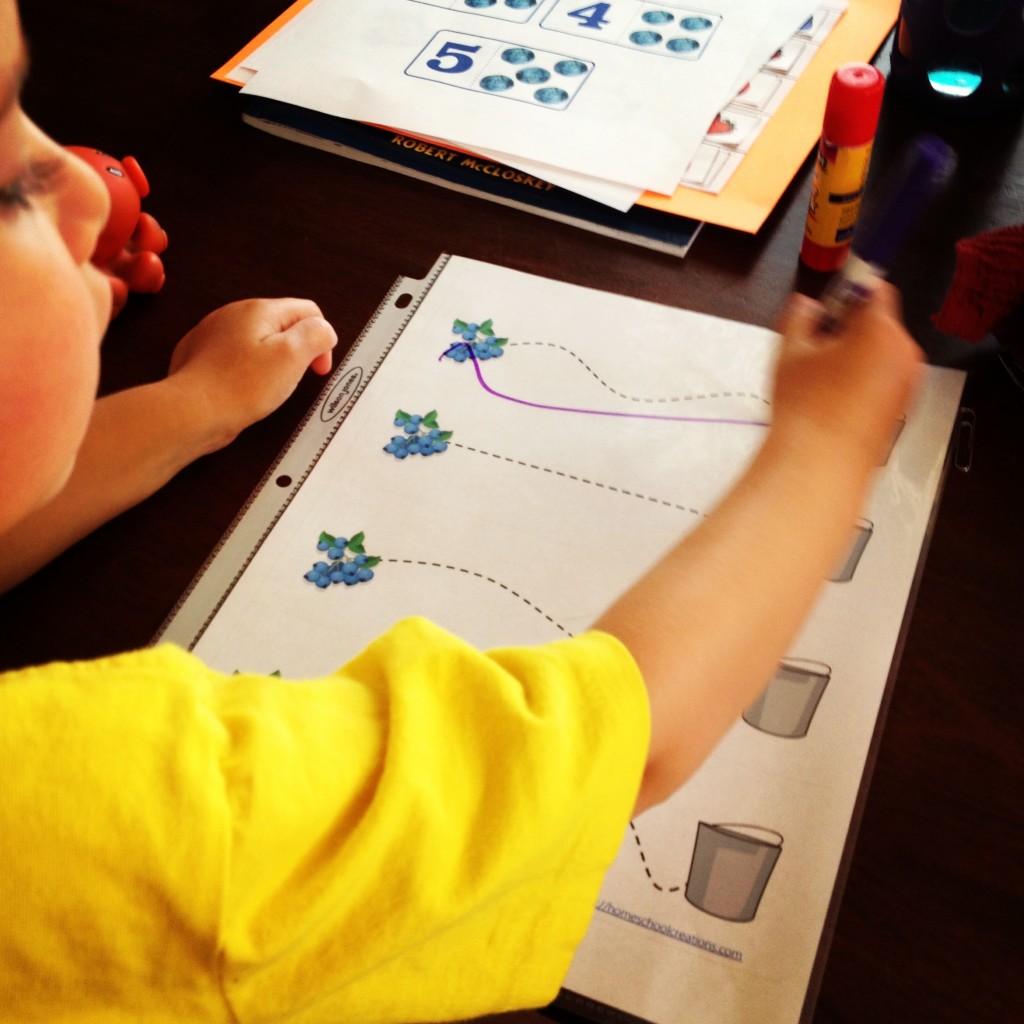 He requested some of his prewriting worksheets, but he spent about 15 seconds actually drawing the lines. 😉

Day 5 with Blueberries for Sal 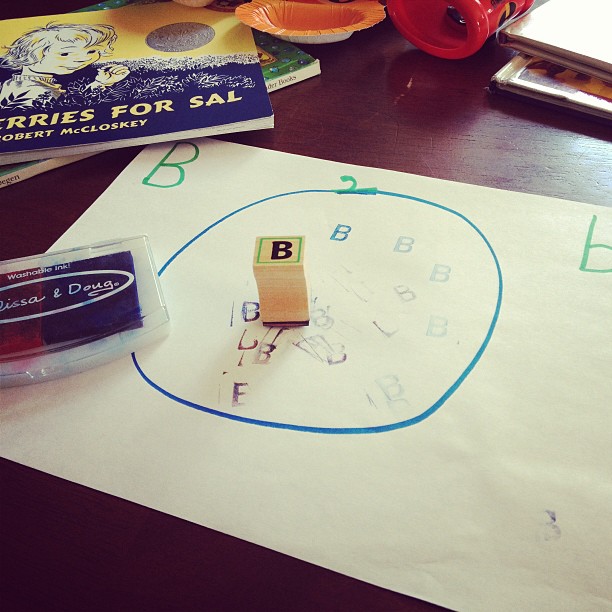 Our last day of rowing Blueberries for Sal, I drew a simple blueberry on a sheet of printer paper and let him stamp the letter B for a little bit. Afterward, he wanted to color his blueberry with markers.

Finally we had one more blueberry hunt around the living room, at his request. He even insisted on hiding them for me and letting me find them! We did this for about 30 minutes! Big change from day one. He loved hunting his blueberries.

Later he “cooked blueberries” in his play kitchen with his neighbors, and I heard him teaching them how to make blueberry jam. It was cute!

Printables & Other Resources for Rowing Blueberries for Sal

Overall Blueberries for Sal was a big hit with my toddler! We’re looking forward to another week of rowing – next up Ask Mr. Bear!

You can see all of our rowing adventures here!

When the Church Lets You Down, Sometimes You Have to Separate
Next Post: My Journey into Natural Living and Better Health