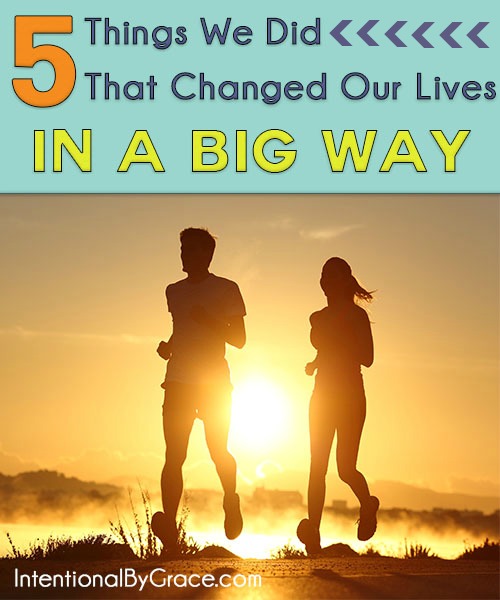 Last year was monumental for my family. The growth and changes that took place are something to write home about. Really.

We’ve long dreamed of being a work-at-home family. Our first few years of marriage were highly characterized by a traveling husband.

It’s understandable really. He went to school for a specific purpose, to receive a specific training, to do the specific thing he dreamed of doing.

Read: He had a plan, and he was working his plan beautifully. He had purpose, and he was doing what he loved!

But then he met me.

I went to school to for a general purpose, to receive a broad education, to do something I hadn’t even dreamed up yet.

We were different. Very different. And it took years for us to figure out how to make our differences merge into something God glorifying.

And then last year happened.

Last year, we finally had enough of the corporate American rat race. We stopped trying to fit a square peg into a round hole and took a leap of faith.

My husband quit his job. The job that moved us across the country 1,500 miles from where we met and married. The job that paid our bills and provided for our needs and plenty of our wants. The job he loved but the job that just didn’t align with our family priorities.

The family priorities we finally agreed on.

When we talk about this change in our lives, people often have a lot of questions. Some people find it fascinating enough to interview us for their podcast.

For too long, we stayed the path we thought we were supposed to be on. We tried to fit the mold. We tried to do what was expected of us. Fear drove so many of our decisions even though we didn’t realize it until we finally broke. We finally just stopped doing a lot of harmful things and started doing some beneficial things.

Stopped taking no for an answer

There are so many ideas and thoughts we had about family life and priorities that for too long we allowed others to tell us, “That’s not possible” or “You’re never going to find what you’re after” or “If it were me, I wouldn’t do that.”

We stopped letting people tell us what we could and couldn’t do, and instead allowed the Holy Spirit to speak directly into our lives.

Started asking why not

Why is this idea so crazy? Why would you not do this way? Why do you think this way or that?

We asked more questions and humbly listened to what others had to say. We dug down deep and discovered the WHY behind what we were doing.

Stopped taking everyone’s word for it

We stopped letting everyone else’s opinion shape our family priorities and convictions. We listened to what others would and wouldn’t do, but we stopped taking their word for it.

If someone came back with some really good biblical reasons for their opinions on how we should order our lives, we prayerfully considered them. But once we started asking questions and really listening, we discovered that not everyone knows why they do what they do.

Started living as though the Bible is true

Start owning who God created us to be

Then we started owning who God created us to be.

And that’s okay. God made us this way.

We want to use the gifts He has given us for His glory even if that means we look and act a little differently than others around us.

Freeing ourselves to listen to the Holy Spirit, to seek truth and live out our convictions has been wonderful.

No we aren’t out seeking to be different for the mere sake of being different. Honestly, we don’t even know that we are all that different until someone just stares blankly at a us in disbelief when we tell them we quit our good paying job to say yes to God’s plans for our family.

And that’s another thing. I believe you know when you’re walking in the will of the Lord. There is a peace from knowing the God who made you and the works that He would have you do. Until you’ve experienced the knowing of walking in faith, relying fully on Him to direct your steps, it seems a little bizarre. But it’s the tasting that makes you crave Him more.

Taste and see that the Lord is good.

It’s only a taste. Once you’ve tasted the freedom of living the life He has planned for you, it’s invigorating and freeing. It’s not easy. And sometimes I wish I could just conform to the world, but that’s putting a light under a bushel. We’re meant to be a little different, a little irreverent, a little like salt that seasons a meal and gives it flavor.

What do you need to do to say yes to God? What is He asking you to step out in faith and follow Him on? It doesn’t have to be quitting a job or anything drastic. It can be in the mundane of the everyday, choosing joy in the poop stains and throw up or playing the board game you don’t like for the 100th time while you’re snowed in again or taking a meal to the single woman you met on the bus as you commuted to work.

Whatever it is that’s holding you back from doing THAT THING He’s calling you to do, do it today. Don’t wait. Trust me – it’s worth it to live for Him.